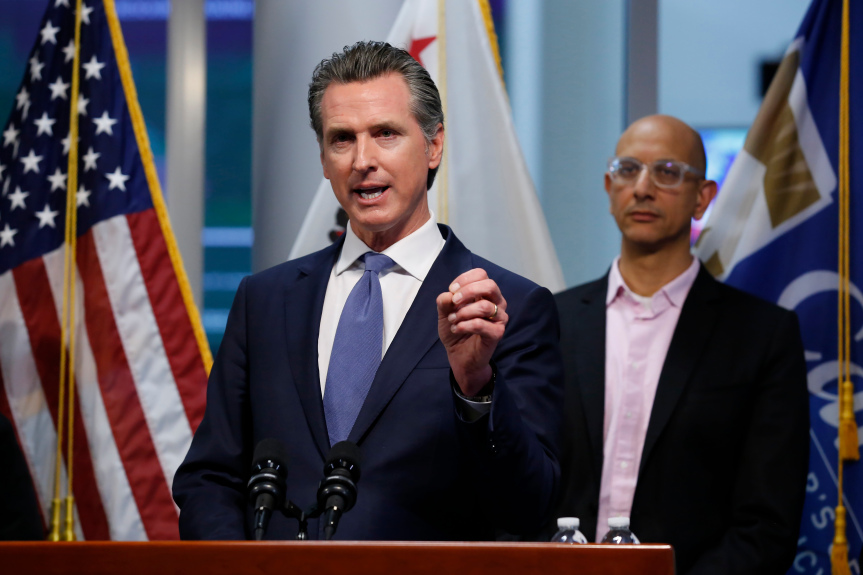 All of Southern California could soon be under much tighter coronavirus restrictions, after Gov. Gavin Newsom on Thursday, Dec. 3, announced a new stay-at-home order that will go into effect in areas where local intensive care bed availability is low — as coronavirus hospitalizations continue surging statewide.

The announcement marked a change from the state’s approach to managing the virus’s spread so far. Instead of focusing on counties, the order will target regional hospital networks and take effect in impacted regions within 48 hours of when intensive care bed availability falls below 15%.

The new order helped underscore the concern health officials have about this second surge spiraling even further out of control, just a week after Thanksgiving and the December holidays weeks away. And the goal, at least partly, is meant to delay and reduce the surge — buying time until vaccines become readily available.

“This is the final surge,” Newsom said. “We have a light at the end of the tunnel with these vaccines, but we need to take seriously this moment. This is the most challenging moment since the beginning of this pandemic.”

“We are using a regional approach in part because that is how hospitals and health care delivery systems work,” Dr. Mark Ghaly, California’s Health and Human Services secretary, said in a Thursday afternoon briefing. “When capacity can’t be met within a specific county, we lean on neighboring counties and their hospital delivery systems to care for a number of individuals.

“So going in as a region, looking at the regional capacity,” he added, “is the trigger to have the regional stay-at-home order.”

The day is fast approaching when the new order will take effect in the Southern California region, where intensive care bed capacity has already dwindled significantly.

As of Thursday, the available intensive care capacity in each region was:

The California Public Health Department said it will review the data daily and provide the numbers in the state’s COVID-19 news release each day.

The order will close many nonessential businesses, such as bars, breweries, wineries, and hair and nail salons. It will also shut down all in-person dining at restaurants, playgrounds, museums, zoos, aquariums, cardrooms, overnight campgrounds — and all private gatherings.

Occupancy in other businesses, like grocery stores, will be limited to 20%. Unlike prior orders, nonessential retail stores can remain open, also with a 20% occupancy limit; Newsom said that decision was made to prevent overcrowding in big box stores, which could cause more transmission of the virus.

Schools that are already open for in-person instruction, meanwhile, can continue offering it.

Los Angeles County has already implemented many of the coming restrictions, like banning in-person dining and private gatherings. But many businesses there that would be closed under the new state order, like salons and museums, are still allowed to operate for the time being.

LA’s adjacent counties, including Orange, will see a wider swath of closures.

Newsom said that while he understands the hardship more restrictions will have on businesses and workers, the new order is necessary to manage the state’s hospital availability and save lives.

“These are triggers that will impact all of us across the state,” he said, “but they are limited in scope and time. We will get through this.”

Hospitalizations statewide have increased 86% over the past two weeks, Newsom said, and intensive care unit admissions grew 67% over a similar timeframe.

The statewide death rate has also surged, he said. A month ago, California reported 14 coronavirus-related deaths in a day. But on Wednesday and Thursday, the state saw back-to-back days of 113 deaths.

The order will last at least three weeks, from when it goes into effect in a given area. For the order to be lifted in a region, the area’s projected intensive care capacity must be at least 15%; after the initial three-week period, that data will be assessed weekly.

Once a region is no longer under the order because it has sufficient intensive care capacity, the state’s county tier system will go back into effect.

State restrictions for counties in the most restrictive tier, but not under the new regional stay-at-home order, still allow:

The tier system places those restrictions on counties that either have a positivity rate of 8% or higher, or have a new daily case rate of 7 or higher per 100,000 people.

Some counties, like Los Angeles, have gone further than the state restrictions. Last week, Los Angeles County banned all in-person dining. And on Monday, the county further tightened restrictions by banning all gatherings except for protests and religious services and reducing the occupancy limits on businesses, including capping essential retail at 35% and non-essential retail at 20%. The county also shut down card rooms and playgrounds on Monday.

Now, it appears, all of Southern California will have to abide by some of those same rules in the coming days.

That may curb the local travel that some residents have undertaken in recent weeks to eat or shop in nearby cities or counties with fewer restrictions.