Mike Pompeo says faith in God should drive GOP, nation as he returns to Southern California 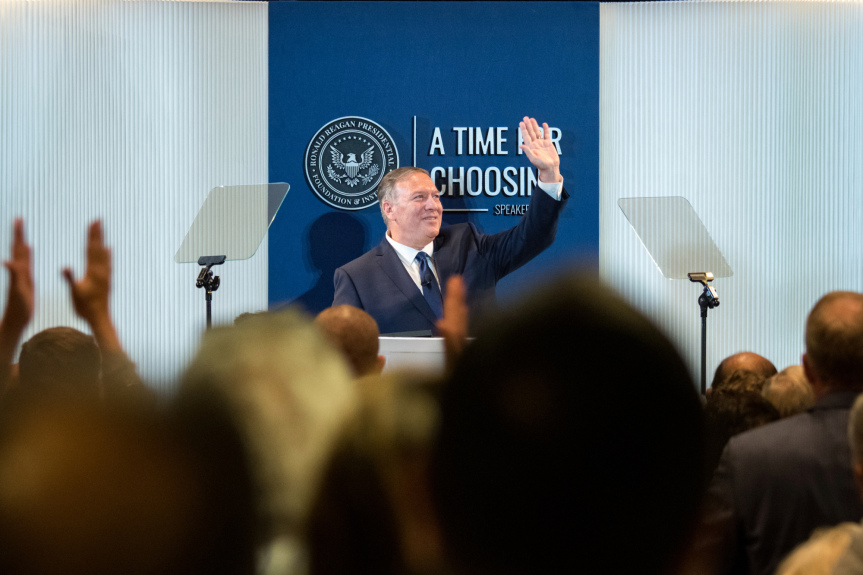 Republican Mike Pompeo returned to his Southern California roots on Monday, July 26, this time potentially as a presidential contender. The former Secretary of State described a nation at risk from within and from abroad but redeemable by a GOP he said must be fueled by a devotion to faith-based virtues.

There were relatively few overt references to former President Donald Trump, the man who appointed Pompeo as the nation’s chief diplomat and as CIA director before that. Instead, Pompeo’s speech — just the latest in a series of recent appearances across the country — before a packed auditorium of friendly onlookers at Simi Valley’s Ronald Reagan Presidential Library tapped a particularly religion-steeped strain of conservative thought for his vision of the GOP in the post-Trump era.

That vision, for Orange County-born Pompeo, leans on faith in God and the need for varying religious beliefs to come together to buoy a return to what he called American’s “moral core.”

“To reclaim America, which I believe only our party can do, I believe there is no more important resource than our churches, our synagogues, our mosques, and temples that grace this United States of America.”

That conservatism — in the tradition of former President Ronald Reagan, Pompeo said — was underpinned by four values: vision, hope, gratitude and forgiveness.

But while the speech was measured in tone, veering from the fiery style that marked Trump’s White House tenure, the former Kansas congressman and top graduate from the United States Military Academy tapped flashpoints long in the GOP zeitgeist.

“Unfortunately, what we accomplished has been cast aside in the last six months by the deep state,” he said, calling out the Biden Administration as putting “our world at risk. It’s weakness, and weakness begets war.

Communism, big tech, the regulatory state, “radicals” on the left and the media, he said, all threaten the nation’s future internally. China, meanwhile, seeks world domination and threats from the Middle East persist, Pompeo said, outlining a nation in which “trouble lies ahead.”

It was was a long way from 2016, when Pompeo, still in Congress, backed presidential candidate Marco Rubio in the 2016 primaries. At the time, he warned that Trump would be an “authoritarian president who ignored our Constitution.”

But Pompeo would come to be one of Trump’s most ardent supporters during the former president’s tenure.

And he would ultimately cite the administration’s biggest foreign policy achievements as a set of agreements by a few Arab and Muslim countries to give limited recognition to Israel. He backed Trump’s tougher approach to China. And he would would tout tough sanctions on Iran through a “maximum pressure” campaign to slow that country’s nuclear production.

Pompeo’s visit was part of the Library Foundation’s Time for Choosing Speaker Series, which is tapping high-profile conservative thinkers on a range of topics. A list of presidential hopefuls are set to appear at the Reagan to speak in the coming months, from U.S. senators Tom Cotton and Tim Scott to former U.N.  Ambassador Nikki Haley.

It came on the heels of former Vice President Mike Pence’s speech at the library in June and Paul Ryan’s in May.

The former speaker of the House urged fellow conservatives to reject the politics of Trump, whose tenure, he said, came to “a dishonorable and disgraceful end” on Jan. 6.

And Pence told a sold-out crowd that he did the right thing on Jan. 6, when he fulfilled his constitutional duty to certify the national election, though he had to spurn President Trump’s directives to do so.

While Pompeo spent less time than his predecessors in the speakers’ series talking specifically about his former boss, it was clear the force of Trump was in the room on Monday.

Though he touched briefly on election security, Pompeo did not discuss Trump’s contention that he won the election, despite a series of courtroom losses and thinning efforts to gather and present viable evidence. Nor did he address the Jan. 6 takeover of the Capitol by boosters of the former president.

Nonetheless, Pompeo took time to detail and applaud the Trump administration’s foreign policy, its adherence to traditional GOP values and its rejection of the policies of the left.

Trump’s echoes were audible in the crowd at the library as well.

“If he runs, it’s a done deal,” said Ken Hidaka, referring to Trump. “I don’t know that Pompeo has a chance “If it’s not Trump, it’s (Florida Gov. Ron) DeSantis.”

Regardless, there was general acknowledgement that the GOP is fragmented — a divide between the values of what some in the crowd called “the old Republican party” and the Party that Trump now leads.