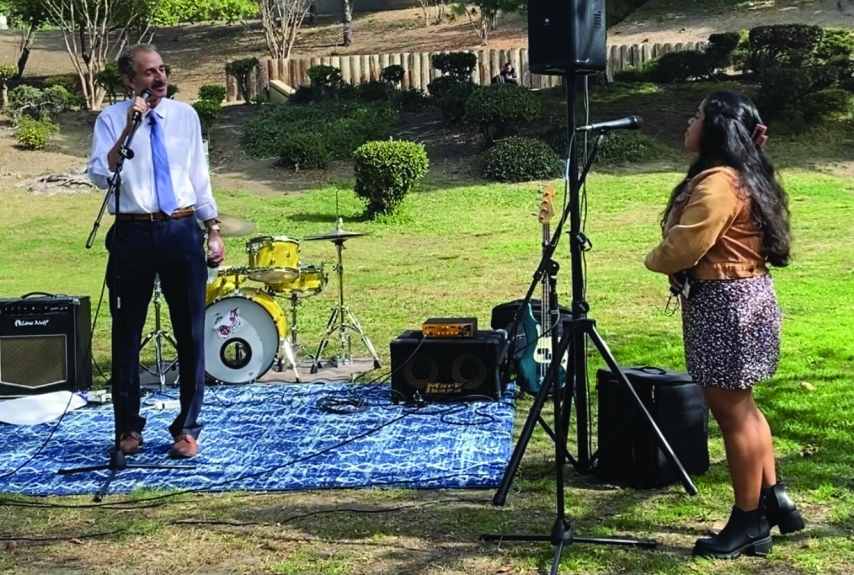 The mayor’s race may not be on most Angelenos’ radar yet, but one candidate was hoping, on a late Saturday morning, that a free Pink’s hotdog would be enough to draw their attention away from a leisurely picnic or jog through Pan Pacific Park, and to a neighborhood candidate meet-and-greet.

But with the weather much too pleasant, the hand-drawn signs posted on light posts that read “Meet Mike Feuer, Free Pink’s Hotdog” and “I Like Mike, Free Pink’s,” were overlooked except by those with a strong hankering for free food and answers from mayoral candidate and City Attorney Mike Feuer about how he will address some of the city’s toughest issues.

The signs led to a small, tree-encircled clearing where a band that had named itself “Mike and the Feueries” for the campaign was playing a cover of “Summertime Blues” by Eddie Cochran, and other songs.

The event is among the first of 101 neighborhood stops Feuer says he is committed to make along the campaign trail to the June 2022 primary election, a series that he is calling, “Meet Mike: Every Neighborhood, Any Question.”

“What a wonderful group of people who are here today!” Feuer said, greeting a gathering seated on picnic blankets and foldout chairs. “Give yourselves a round of applause. You look like Los Angeles, friends. It is wonderful to see such a — not only interested but engaged — group of residents.”

And for about 30 minutes, Feuer took questions at first from campaign staffers who read from scraps of papers onto which attendees had written their questions, including how he would “wrangle the graft and inside dealing” taking place at City Hall, end homelessness, help businesses stay and grow in L.A., and improve public education. Some of the questions were also asked by the attendees themselves who lined up to approach the mic.

The campaign said about 100 people attended.

Those who showed up were asked to place a sticker next to the issue that matters to them the most — many chose environment and climate, and homelessness, while a few thought government ethics and healthcare access were the most important.

Campaign staffer Hailey Shaw said that the plan is to complete the 101 visits “well before” next June’s election. That would average out to more than four such stand-ups in which Feuer will take questions from residents.