Mayor Garcetti focuses on recovery during State of the City address 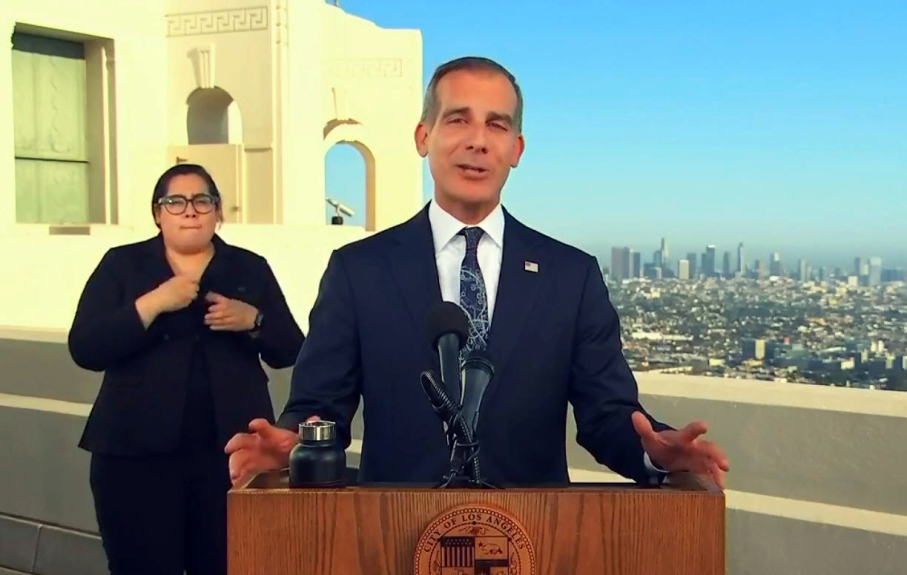 Los Angeles is “strong, and bruised,” Mayor Eric Garcetti declared Monday, April 19, during his annual State of the City address, delivered this year via social media from the Griffith Observatory, the L.A. skyline looming over his shoulder.

With recovery seeming more of a reality with each passing day, the mayor’s pandemic-framed speech dropped significant hints about a possible rebound strategy that could include nearly $1 billion to address the homeless crisis.

In recent years, “we built a more resilient, a more just, and a more forward-looking city,” Garcetti said. But plans were upended more than a year ago by the mammoth novel coronavirus outbreak, he said, suggesting that now is the time to envision a post-pandemic community.

“None of us could have foreseen what this year would hold,” he said. “We’ve wept through daily death tolls, each as high as a Northridge earthquake. We lost livelihoods. We lost lives.”

Meanwhile, Garcetti, who is expected to release his proposed city budget on Tuesday, vowed change. He reminded residents the promise he made in last year’s State of the City address: That when his city emerges from the pandemic, “we would not return to a broken status quo.”

The speech was delivered as Angelenos looked to their local government for help and hope. In his remarks, Garcetti attempted to boost optimism, albeit in inspecific terms, by delivering funding proposals built around a wide range of issues — including homelessness, business recovery, racial justice, transportation and the needs of youth.

Garcetti did not offer many details on the investments, which are expected to be further mapped out on Tuesday.

Notably, Garcetti waded into the bitter debate around law enforcement’s role in the city. In the last year, calls to defund, or even abolish the police department have grown, both nationwide and among Angelenos, burgeoning amid protests demanding accountability amid concern over police shootings. Garcetti declared that he supported evolving, not disbanding LAPD.

“If you want to abolish the police, you’re talking to the wrong mayor,” he said. “If you want to move backwards towards a failed us-and-them strategy that made police an occupying force in communities they were meant to serve, you’ve come to the wrong place.”

The mayor instead backed ideas for improving community safety in other ways, including funding for an unarmed team to respond to non-violent, mental health-related 911 calls. He also called for an increase in funding for the city’s gang intervention program.

Meanwhile, Garcetti urged $12 million to fuel LA REPAIR (Reforms for Equity and Public Acknowledgement of Institutional Racism), which would buoy efforts to repair race relations in the city.

Enhancing programs for the city’s young people was also among the mayor’s priorities. Programs highlighted included a year-round Angeleno Corps program that would fund the hiring of 400 students to help the city recover from the pandemic’s jolt.

The Mayor’s Fund would be used, Garcetti said, to pay for the DACA fees of undocumented students in the L.A. Community College District who help with COVID-19 recovery.

Also touted were programs to pay 1,000 students to tutor their siblings and and a proposal to pay hundreds of young people to keep the city clean.

Garcetti’s suggested work, study and play opportunities for L.A. youth are being aggregated at https://lamayor.org/Summer2021.

Focusing on energy, Garcetti pitched a moratorium on new oil and gas drilling in the city; and vowed that by 2030, the Department of Water and Power will offer 80% renewable and 97% carbon-free energy, six years ahead of schedule.

In other highlights, Garcetti…

View a replay of the speech here.