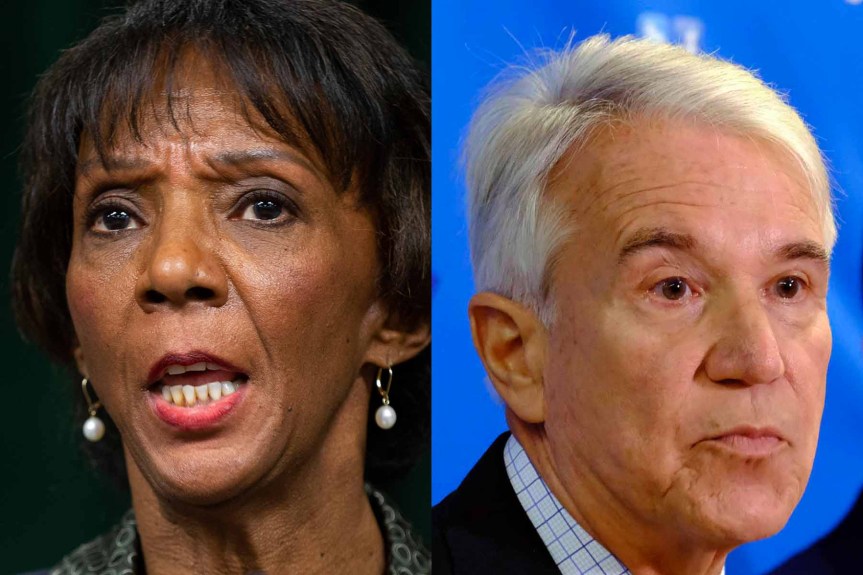 Squaring off in a debate Saturday, Oct. 3, just days before Los Angeles County voters begin receiving ballots, District Attorney Jackie Lacey mocked her challenger George Gascon for “making a mess of things” in San Francisco, while Gascon accused her of being so in the pocket of police unions that have donated to her campaign that she looks the other way when investigating misconduct.

In a calm, live hour of questions and answers on ABC7, Gascon – the former District Attorney of San Francisco — and Lacey – who is seeking a third term as the county’s top prosecutor —  exhibited their distaste for each other as they traded answers on a variety of topics including systemic racism in law enforcement, the death penalty, mental health and who donated money to their campaigns.

And the prosecutors accused the other of letting crime rates increase under their watches.

“My opponent talks about safety,” Gascon said. “During her leadership, we’ve seen violent crime go up by 27 percent in LA County and nearly 50% in the city of L.A. At the same time, we have seen reductions per capita in violent crime in San Francisco.”

Lacey, who has worked for the District Attorney’s Office for 30 years, touted her experience beginning at the bottom, including years during the 1990s when voters wanted tougher crime laws, and working her way to the top. Now with voters wanting to change some of those laws, Lacey boasts of reform programs she enacted, including steering the mentally ill into treatment instead of jail.

“You can do reforms,” Lacey said. “But you have to maintain the safety of the community. There are a lot of homeless people, everyone deserves some compassion at some level, but when it comes to addressing violent crime, you have to be a strong prosecutor. You have to be the one to go into court and demand justice.”

Gascon said Lacey is stuck in the past and has called her a failed leader. Gascon has touted his ability to reduce crime while jailing less people, something he wants to bring to Los Angeles County. Lacey has opposed several criminal reform measures designed to decrease the state’s prison population – and the numbers of Blacks and Latinos in jail — including 2014’s Proposition 47, a measure co-written by Gascon to reduce many felony drug and theft crimes to misdemeanors.

“We can look forward,” he said. “We can begin a journey into a 21st Century mode of law that is more humane, that is more thoughtful when it comes to race, and that is going to make us safer.”

Each candidate agreed that systemic racism exists in law enforcement and said they operated diverse offices. Lacey said the best way to deal with racism is through training, forbidding racism through laws and policies, and to hire the right people to be police officers. Gascon also cited training and diversity and using technology “to take race out of the decision-making process for prosecutors.” He said his former office used artificial intelligence that enabled prosecutors to analyze crimes without knowing the races of the people involved.

Each candidate said law enforcement and community members must work together to solve the problem.

On police accountability, Gascon – a former Los Angeles Police Department officer who rose to assistant chief during his 30-year career that included stints at chief in Mesa, Arizona and San Francisco — and Lacey each charged the other with not prosecuting police officers, something that has drawn protests against both from Black Lives Matter activists.

“He was known for going easy on the discipline of officers,” Lacey said of Gascon’s LAPD career. “He was chosen deliberately to be the one who decides discipline.”

Black Lives Matter has protested outside Lacey’s office and at her home, citing her failure to prosecute police officers in fatal officer-involved shootings. Lacey said she has prosecuted some 200 officers for misconduct, but said she follows the law when it comes to police shootings, not public sentiment. Gascon, who also came under scrutiny for rejecting charges in at least two controversial San Francisco police shootings when he served as DA, accused Lacey of siding with police unions who have bolstered her campaign accounts.

The Los Angeles Times reported Thursday that Lacey has received about $5 million from law enforcement unions including $1 million each from the Los Angeles Police Protective League and the California Correctional Peace Officers Association.

Gascon called it a conflict of interest because Lacey is responsible for deciding whether to prosecute officers.

“She talks about me being soft on employees,” Gascon said. “This when the reality is that law enforcement is supporting her because she looks the other way.”

Lacey pointed out the same news report that showed Gascon received about $6 million in donations from Bay Area philanthropists, who she said are using their money so Gascon could move to Los Angeles County to “experiment” on its safety.

The Times reported that the leading donor was Democratic mega-donor George Soros, a billionaire often cited with ire by conservatives for his support of liberal candidates. Although Soros’ name was not cited in the debate, the Times reported Soros donated $1.5 million to Gascon’s campaign.

On the death penalty, Lacey said voters in California have approved capital punishment and that she charges it in 2 percent of her cases, those that are extreme like the 2013 torture murder of 8-year-old Gabriel Fernandez of Palmdale, and the Grim Sleeper serial killer, who murdered at least 10 women in Los Angeles. Gascon said Los Angeles County voters are against capital punishment, which he said fails to deter crime, works disproportionately against people of color, and is “irreversible if you make a mistake.”

Unlike pre-COVID-19 debates where audience members heckled Lacey, this matchup was held virtually with each participant and the panelists on the Internet, so there was no face-to-face interaction. But each candidate clearly does not have much respect for the other.

On the subject of the summer’s Black Lives Matter protests following George Floyd’s death at the hands of police in Minneapolis, Gascon criticized Lacey for not prosecuting any police officers for misconduct against demonstrators.

“The police usually know that they’re not going to be held accountable when they do wrong in this community,” Gascon said. “Not only were there many problems with their responses, but there were more problems with the fact the district attorney looks the other way when there are so many cases where we saw excessive force occur.”

Lacey, who has said she considers Gascon unqualified to do her job, said the protest cases remain under review and charges will be filed if laws were broken.