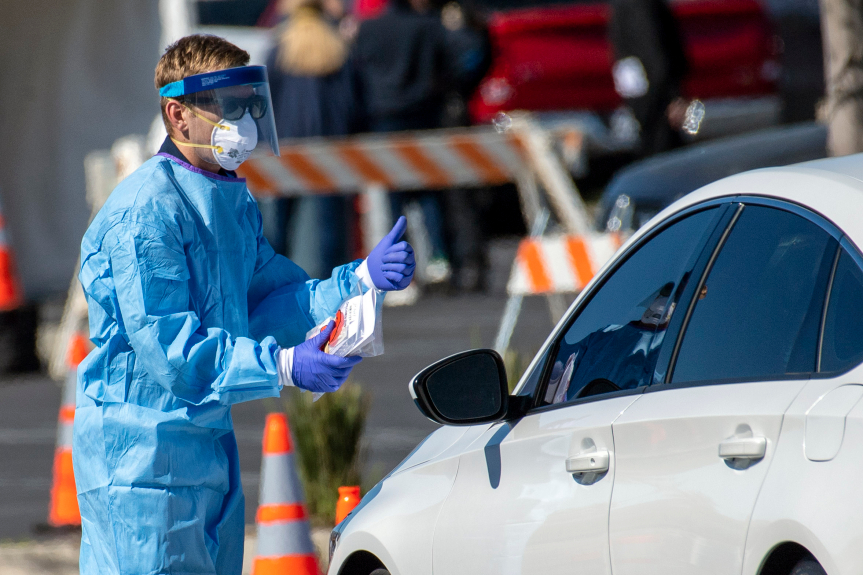 The vote sets the stage for a related effort in which the city of Lancaster, looking to team with neighboring cities, would establish its own public health department.

Lancaster has called a special meeting for Thursday, Dec. 3, to consider both efforts. Both reflect months of bubbling frustrations among some leaders in the area who are upset with blanket stay-home orders they say are hurting their local economies and restraining civil liberties.

“They are doing exactly the same thing they did in March and April,” said Lancaster Mayor Rex Parris, among leaders who have been pushing back on the county’s orders because ultimately they don’t see them having been successful.

“Across L.A. County, thousands of restaurants were gearing up for Thanksgiving…,” he said. Now, “they are driving these people into bankruptcy,” he said, lamenting what he said was the county’s lack of reaching out to what ideas or information northern L.A. County leaders might have.

Lancaster’s proposed measures come on the heels of County Public Health’s order to shut down outdoor dining in the county for at least three weeks — everywhere but in Pasadena, which has its own public health department. The closures began at 10 p.m. Wednesday under a revised health officer order affirmed by a Board of Supervisors’ 3-2 vote on Tuesday.

The split vote rejected Supervisors Kathryn Barger’s and Janice Hahn’s effort to delay the ban for two weeks to study alternatives. The order allows takeout and delivery, but business was expected to be drastically reduced with hundreds of thousands of jobs affected, business leaders said.

County public health officials — faced with dramatically increased rates of transmission and potentially exponential growths of deaths in the coming weeks — have been ringing major alarm bells in recent days as hospital rooms fill up again and depleted hospital staffs scramble to keep up.

They worry that such resources could be overwhelmed this month across the county, as more people ignore public health guidelines and if businesses were able to remain open without constraint.

“Limiting certain activity that can easily result in increased cases like outdoor dining at restaurants is done to try to get our case rates lower so we can move to a less restricted tier and open more businesses,” said Health Officer Dr. Muntu Davis this week. “We know what we have to do, but not enough people are doing it.”

County projections show that the virus was now present in roughly one in every 145 people — many of whom may not know it — details officials reiterated Wednesday, in defense of the outdoor dining ban.

Some leaders in the area have grumbled for months about county and state directives that they see as too much of a one-size-fits-all approach in a county as vast and diverse as L.A., with its 10 million people.

Early on, Santa Clarita and Lancaster were among those that pushed hard to be exempted from some county restrictions, arguing that the blanket orders didn’t account for areas of the county that had lower case rates.

By July 4, Parris himself was openly defying a county ban on public fireworks displays.

There’s a defiant strain in the area, where even the area’s congressman chimed in recently.

“CA politicians calling for additional restaurant closures and curfews is a sign of weak leadership!” said Rep. Mike Garcia, R-Saugus, in a recent tweet. “When will our local and state officials have the courage to realize lockdowns hurt us more than help us? Open schools, open restaurants, social distance and take real measures…”

Parris acknowledged that the county’s first stay-home efforts back in March were justified, but he said subsequent efforts to tighten and untighten are not working, despite Ferrer’s frequent urgings that they do work — in fact, helping to reduce the numbers each time.

The recent effort was propelled by a particular exchange at this week’s Board of Supervisors meeting.

That’s where Los Angeles County Public Health Director Barbara Ferrer and Davis acknowledged that contact tracing cannot definitively point to outdoor dining as the cause of the surge. Davis leaned on Centers for Disease Control studies. They stressed it is the only retail activity that allows customers to be mask-less for long periods of time.

“If it were up to me, anybody not wearing a mask when they are out in public would be arrested,” he said. “That’s an act of domestic terrorism and should be treated like one.”

“The outcry from the public regarding this week’s decision by the County Department of Public Health to arbitrarily close outdoor dining proves that local communities should have input into any of the decisions that deeply affect their residents and businesses,” she said in a statement. “I fully support these efforts by Mayor Parris and other elected officials who are pursuing every opportunity to ensure their local voice is heard. We must also address the problematic nature of countywide health mandates and instead target health orders more locally as efforts to slow the transmission of COVID continue.”

The effort in northern L.A. County to establish an independent health department is not new.

Palmdale Mayor Steve Hofbauer said his city has been leading on the issue, with other local cities.

“We have found considerable success in working regionally with our neighboring cities. This may be another opportunity,” he said. “I don’t think there’s a lack of will in exploring any option.”

Local officials see it being modeled after Long Beach or Pasadena, which established its health department in 1892.

In the wake of the county’s most recent health order closing down outdoor dining, Pasadena chose not to enact the restriction, saying that a smaller municipality can better enforce health standards at a smaller number of restaurants.

Lisa Derderian, the city’s spokeswoman, said it’s an advantage of an independent, smaller jurisdiction, where for decades the agency has forged ties with with local businesses. When a major event happens, enforcement teams are nimble and the agency’s focus is on a singular city.

But administering such an agency is a massive effort, she said, even in non-COVID times and even for a smaller agency than the mammoth L.A. County, she said.

There’s the needed approval from the state. There’s legal processes to move through. There’s the grants that are need to fund positions in the department.

“Just the contact tracing alone, which is the responsibility of the health department, is a huge undertaking, especially during COVID,” she said.

There’s the hundreds of communicable diseases to deal with in congregate settings and their threats at senior care facilities, a public health process that Pasadena has administered for many years. Not to mention maternal and child health evaluations and the vaccination waiver process.

“More power to anybody else who wants to move forward and try to establish their own health department or piggy back off another… if that’s even possible,” Derderian said. “But it’s a major undertaking that COVID is finally shining a light on these health officers and the magnitude of work that’s involved.”

That undertaking hasn’t gotten past north L.A. County leaders, who say they are up to the challenge.

“The challenge will be in identifying the resources to fund it,” Hofbauer said. “Unlike other cities with their own health departments that take in 20% or more of the base taxes to provide services, the north county cities receive about seven-tenths of that 1%. We are much more reliant on sales taxes — which have taken a massive hit with COVID — and rely on contract providers (the county) to provide certain services. We took over public works in house. Why not this?”

Parris acknowledged the task and public funding sacrifices that might be involved. But he noted that there are experts in his community that the cities could hire for a new department.

“Do you think I want to do this?” Parris said. “Do you think I don’t understand that this is going to cost millions of dollars for services we are already paying for and will continue to have to pay for to L.A. County?”