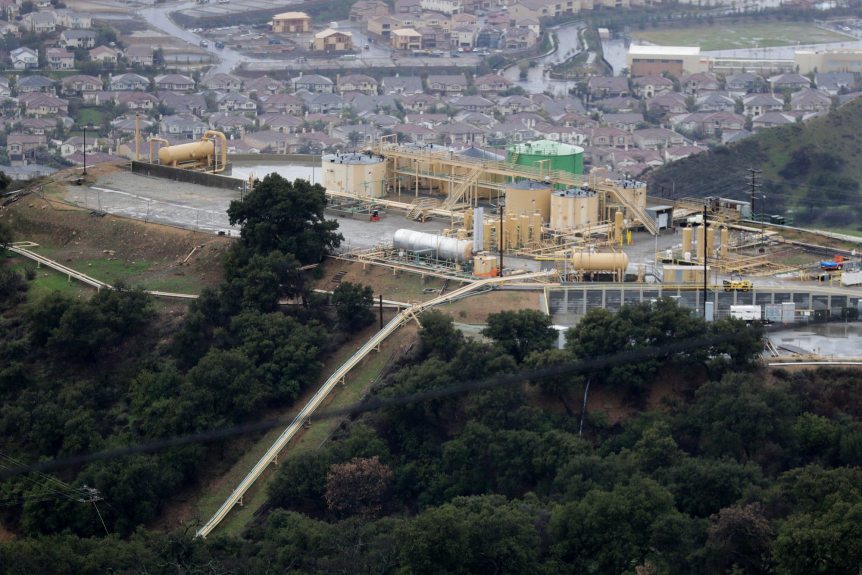 After more than five years since a geyser of methane began gushing from the ground above north San Fernando Valley neighborhoods, a resolution seeking to decommission the Aliso Canyon natural gas storage facility was approved by the Los Angeles City Council.

The resolution authored by Councilman John Lee, who represents communities affected by the gas leak, passed with 14 of the 15 council members in favor.

“Climate change is real,” Lee said during the meeting. “Not only is climate change real but the experience what my community went through when the Aliso Canyon facility experienced the largest blowout in the release of natural gas in American history was also a reality.”

In his resolution, Lee asked the state and Gov. Gavin Newsom to support “legislation and regulatory efforts associated with reducing the need of the Aliso Canyon natural gas facility and its eventual decommissioning while ensuring reliable energy services for the Los Angeles region.”

He also urged the state agencies that oversee the facility and Gov. Newsom to accelerate a permanent closure plan for Aliso Canyon “in order to keep his promise to protect the health and welfare of city residents and to preserve the environment.”

Miguel Lopez-Najera, a SoCalGas representative, wrote in an email that the facility “continues to play a vital role in the resiliency of California’s energy system, supporting the decarbonization of electricity during the peaks and valleys of solar and wind supply.”

He added that “all five of the independent assessments of our gas storage system have concluded that gas storage, especially Aliso Canyon, is essential to energy reliability and keeping the lights on.”

During the blowout, Southern California Co., which runs the facility, grappled for four months to cap the leak, while the lives of residents in nearby communities were upended. Thousands moved to hotels. Businesses closed. Children stopped attending schools.

In the months following the blowout, residents and activists started calling on Gov. Jerry Brown and state agencies to close the facility.

SoCalGas company said, in the meantime, that state regulators and independent experts have called the safety enhancements at the field the most comprehensive in the nation.

Residents reported experiencing headaches, fatigue and nosebleeds. First responders along with state officials who were in close proximity to the 2015 gas leak reported long-term health concerns.

The $25-million health study that emerged from the 120 million settlement between the utility, the county, city and the state agencies and conducted by the Los Angeles County Department of Public Health has not started yet.

A list of groups that say they have no confidence in the direction the public health department is moving with the study keeps growing. Four San Fernando Valley neighborhood councils and a community group formally advising the study recently said the probe proposed by the department has serious gaps and lacks requirements for clinical examinations among other things.

Kyoko Hibino, a Porter Ranch resident and co-founder of Save Porter Ranch, was one of several residents and activists who called on council members to close the facility. She said she had lived in the area for about 14 years and the blowout had changed her life.

“We still smell gas, chemicals and burning plastic regularly here. We now know we have been exposed to chemicals harmful to our bodies,” she said.

Patty Glueck, a co-founder of the Aliso Moms Alliance, urged the council members to “tell the (state) government that a timeline for closing this facility needs to be established sooner than 2027 because for many of us this is a health and safety crisis. The health of Angelenos should matter more than the health of SoCalGas’ management.”

Food & Water Watch California Director Alexandra Nagy said in a statement that five years is too long to wait for justice.

The resolution comes a few weeks after the Los Angeles City Council voted in support of a resolution to close the Playa del Rey natural gas storage facility owned by SoCalGas.