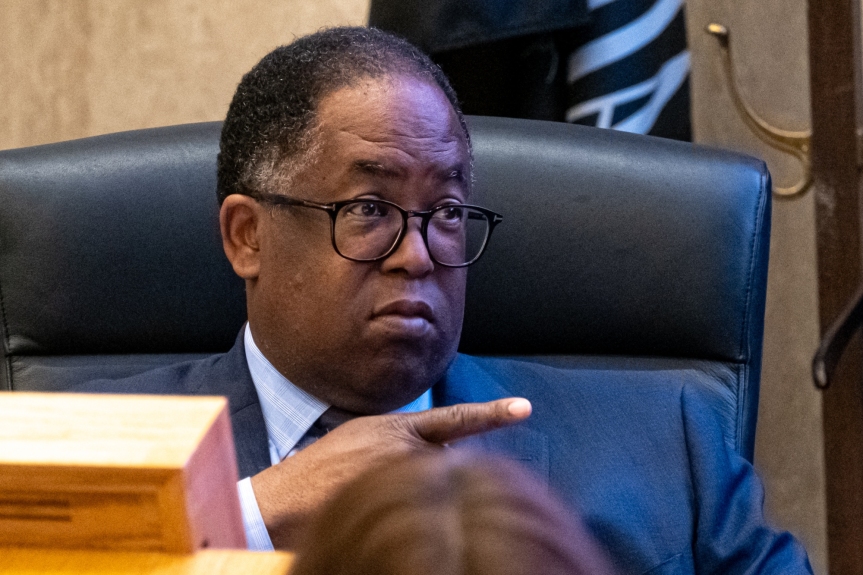 The Los Angeles City Council is scheduled to consider suspending Mark Ridley-Thomas, who was indicted last week on federal conspiracy and bribery charges.

In a motion submitted this morning, Council President Nury Martinez called for Ridley-Thomas called for the suspension of Ridley-Thomas “from the office of Councilmember of the 10th District of the Los Angeles City Council.” It was seconded by Councilman Mitch O’Farrell.

The motion has been scheduled for a special meeting on Wednesday, at 11:15 a.m.

Ridley-Thomas was indicted by a federal grand jury last Wednesday on bribery and conspiracy charges. He said in a letter released Monday that  he planned to withdraw from actively participating in City Council and committee meetings, according to a Monday, Oct. 18 letter sent to colleagues and other city officials.

“I fully appreciate the importance of the Council being able to conduct its business with minimal distractions,” Ridley-Thomas wrote, appearing to refer to the federal allegations. “With that in mind, and with deep respect for each of you, I write to let you know of my intention to immediately step back from participating in both full Council and Committee meetings.”

He also noted that he was looking to resume his duties “at the earliest appropriate time.”

In the letter, Ridley-Thomas said that he has “every intent of fighting outrageous allegations and expect to be fully exonerated.”

“While the alleged crimes took place while Mr. Ridley-Thomas sat on the Board of Supervisors, these charges are serious and the council will need to take appropriate action,” Martinez said last week, but she offered no details on what that action might include.

If the councilman is suspended, Los Angeles Controller Ron Galperin said he will cut off Ridley-Thomas’ salary payments and benefits.

“No one indicted for public corruption and suspended by the City Council should receive a taxpayer-funded salary,” Galperin said Tuesday.

In June 2020, the Los Angeles City Council voted to suspend Councilman Jose Huizar from office after he was charged with felony racketeering. Less than a week later, Controller Ron Galperin terminated Huizar’s city salary payments. In a statement following that decision, Galperin said it was “unacceptable and impermissible” for an official “to continue drawing a paycheck and collect hard-earned taxpayer dollars” while being charged with public corruption and suspended from duties.

The City Council doesn’t have the power to remove a council member from office, and Huizar refused to resign, despite calls from Mayor Eric Garcetti and his colleagues to do so. Councilman Kevin de Leon won a special election in March 2020 to replace Huizar, but he didn’t assume the position until Oct. 15, when the council appointed him to fill the seat that was left vacant by Huizar’s suspension.

Garcetti last week called the charges faced by Ridley-Thomas a serious matter and said anyone who violates the law should be prepared to pay the consequences. But he has so far reserved judgment on Ridley-Thomas.

At least one fellow council member has called for Ridley-Thomas’ resignation.

“These charges tarnish the reputation of the entire LA City Council, and because of that, Ridley-Thomas should immediately step down from his position,” Councilman Joe Buscaino, also a candidate for mayor, posted on Twitter last week.

Ridley-Thomas has served as the chair of the Homelessness and Poverty Committee.

Councilwoman Nithya Raman, who sits on that committee, called on Ridley-Thomas last week to at least step down as chairman and be stripped of other committee assignments “in the short term.”

Following the filing of federal indictment against Ridley-Thomas and others on Wednesday, a meeting of that meeting scheduled for the next day was canceled.

Ridley-Thomas, 66, and Marilyn Louise Flynn, 83, of Los Angeles, were informed of the indictments last week and agreed to appear for their arraignments in Los Angeles federal court in the days ahead, according to the U.S. Attorney’s Office. The allegations focus on a time before Ridley-Thomas returned to the City Council, while he was still a member of the county Board of Supervisors.

Ridley-Thomas’ arraignment and first court date is set for 1 p.m. Wednesday at the U.S. Courthouse downtown. Flynn is expected to be arraigned Monday.

Also expected Tuesday was a Board of Supervisors vote on an audit proposed by Supervisors Hilda Solis and Kathryn Barger, which would probe the county’s role in the allegations, as well as review county policies in place to prevent such alleged actions.

The board will decide whether to instruct the County Counsel to retain an outside law firm to conduct an independent investigation of the allegations, “and the associated County processes and policies in place as well direct all relevant departments involved to preserve “all potentially relevant materials and information.”

“The allegations in the recent Federal indictment of a former Los Angeles County Supervisor undermine the County’s standards of excellence and harm citizens’ confidence in the public officials who represent them,” read the motion for Tuesday’s meeting. “Now, more than ever, we must work to restore public confidence in government and to prevent any future political corruption and improper influence.”

The 20-count indictment filed in Los Angeles federal district court alleges that Ridley-Thomas conspired with  Flynn, former dean of USC’s School of Social Work, who agreed to provide Ridley-Thomas’ son with graduate school admission, a full-tuition scholarship and a paid professorship. She also allegedly arranged to funnel a $100,000 donation from Ridley-Thomas’ campaign funds through the university to a nonprofit to be operated by his son, according to the indictment.

Flynn, speaking through her attorneys, also said she plans to fight the charges and expected to be vindicated.

Ridley-Thomas said on Friday that he has “no intention of resigning” his seat and is focused on fighting the allegations.

Ridley-Thomas is a giant figure in local politics, previously serving on the Los Angeles City Council from 1991-2002, then serving in the state Assembly and state Senate before he was elected to the powerful county Board of Supervisors in 2008, serving until 2020 when he returned to the City Council.

“When I ran for City Council, I made it clear that my highest priority would be addressing the city’s homeless and housing crises, and that remains the case. There is no issue that matters more to Angelenos and to me,” Ridley-Thomas said in a prepared statement. “That said, I have no intention of resigning my seat on the City Council or neglecting my duties.”

Ridley-Thomas is the third L.A. City Councilman to be indicted in the past couple of years. Huizar pleaded not guilty in December to bribery and other federal charges in a racketeering indictment, and Mitchell Englander was sentenced in January to 14 months behind bars for lying to federal authorities about his dealings with a businessman who provided him $15,000 in secret cash payments and a night in Las Vegas.