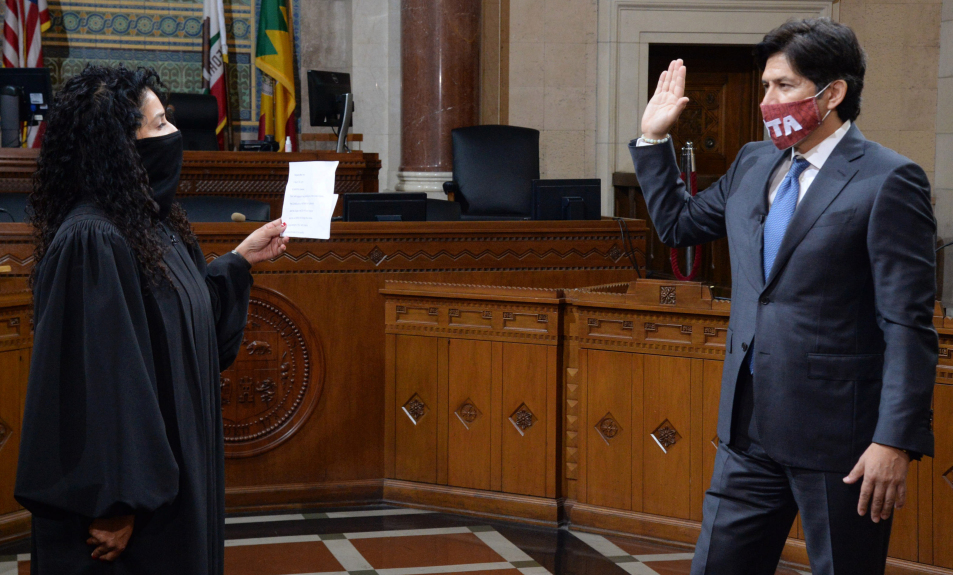 Instead, he was sworn in early, on Thursday, Oct. 15, to fill the seat, vacated this summer after the former officeholder, Jose Huizar, was arrested amid a wide-ranging FBI investigation into bribery schemes at City Hall.

Huizar was suspended from the City Council in June, after his arrest stemming from a case in which prosecutors accused him of being a ringleader in the wide-ranging bribery scheme involving developers seeking approvals from City Hall.

De León shared video of his swearing-in ceremony and remarks. He will attend his first official City Council meeting next week, on Oct. 20.

During his remarks, de León said he will be working to get 200 additional beds geared to the homeless in the city and other additional housing units created within the 14th council district.

The former state lawmaker pointed to “mid-century rules to build 21st century affordable housing” as the culprit for why such projects are not being built fast enough.

“It’s time to revamp our entire planning process to prioritize, accelerate and expand affordable housing throughout Los Angeles,” he said.

He also said he wanted to help make Los Angeles “the epicenter of the clean-energy revolution — investing in innovation to clean up the air we breathe — and create good-paying jobs in the process.”

The City Council has been a popular destination for state legislators in recent years.

A former councilmen who resigned mid-term, Felipe Fuentes, also served in the Assembly.

Outgoing council member Herb Wesson, who is now running for am L.A. County supervisor seat, was formerly the speaker of the state Assembly.

Also, Antonio Villaraigosa spent less than a four-year-term on the City Council before running and being elected as mayor of Los Angeles in 2005.

Despite staffers still operating many of the functions of the office, the 14th District faces challenges that may demand the presence of a political representative — homelessness chief among them.

The district contains Skid Row and has the largest homeless population of the 15 districts, according to the latest count.