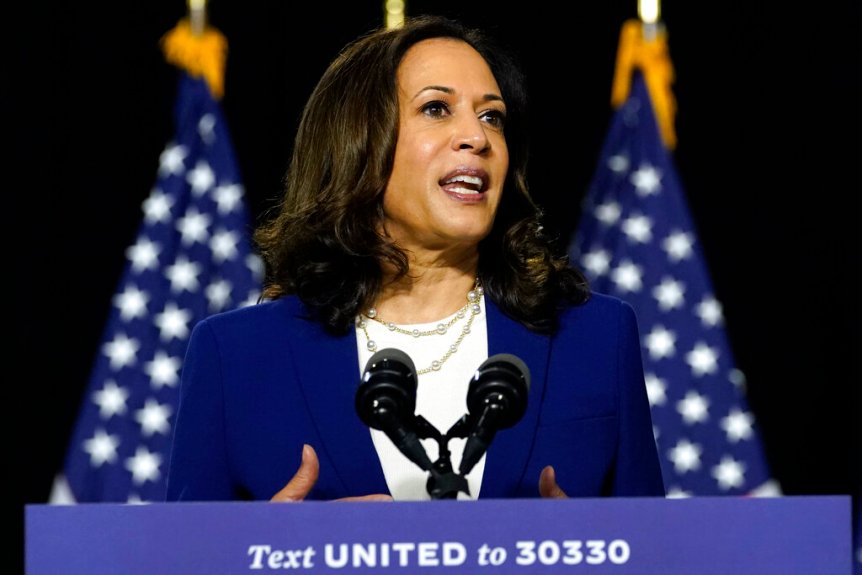 Kamala Harris is poised to make history on Wednesday as the first Black woman to accept a spot on a major party’s presidential ticket, a moment intended to galvanize Democratic voters heading into the fall campaign against President Donald Trump.

This will be her second time speaking to the Democratic National Convention. But the stakes are higher than ever before as Harris tries to unite the party behind Joe Biden, while also introducing herself to a national audience that may be tuning into the campaign for the first time.

“For somebody with her wealth of background and experience, she’s still fresh. She’s still new,” said Ohio Rep. Marcia Fudge, a former chairwoman of the Congressional Black Caucus who endorsed Harris’ 2020 presidential primary run before throwing her support behind Biden in March. “I think people are looking for that.”

Former President Barack Obama will speak ahead of Harris on Wednesday, the nation’s first Black president handing off to the first Black woman on a major presidential ticket. Harris will be introduced by her sister, Maya, and her niece Meena, as well as Ella Emhoff, her stepdaughter.

The senator’s advisers say Harris will tell her story while highlighting the examples and experiences of others.

“I hope that they see themselves in her when they hear her speak,” Mari Urbina, national director of Indivisible, a progressive advocacy group, said of young first- and second-generation immigrants across the country. “And that they are motivated to understand that, not only do they have to be part of getting us out of this nightmare, but that they also can feel part of this historic change that we’re all about to embark on.”

Harris also plans to describe a nation where everyone is welcome and entitled to equal opportunity and legal protection, and make the case that Biden is uniquely qualified to lead the country, aides say.

In a virtual address Wednesday to the convention’s Asian American and Pacific Islander Caucus, Harris said she would deliver her speech “knowing that I stand on the shoulders of so many people who are on this call and those who came before us.”

The daughter of Jamaican and Indian immigrants, Harris has shined in key moments before.

She was lauded for drawing a crowd of 20,000 to the announcement of the start of her presidential campaign in Oakland last year. Her subsequent tough questioning of two Trump nominees, Brett Kavanaugh for Supreme Court justice and Bill Barr for attorney general, during Senate confirmation proceedings was a similar high point, as was her broadsiding Biden during a debate over his opposition to busing in the 1970s to integrate public schools.

But Harris also launched her presidential bid with expectations that she would electrify the field, only to see her campaign struggle to find a consistent message and fizzle — with the California senator dropping out months before the first votes were cast. She also won’t have the spotlight all to herself on Wednesday: Vice President Mike Pence scheduled a visit to Wisconsin hours before Harris’ speech.

Convention addresses are often the most important for those selected as vice presidential candidates, but also only the start of a far bigger role in public political consciousness should their ticket win. There’s potentially even deeper repercussions for Harris, though, since she could be called upon to step into the role of party standard bearer as soon as 2024, should Biden — who will be nearly 82 by then — opt not to seek a second term.

Biden hasn’t expressly said he’d serve just a single term, but he has talked openly about being a bridge to a new generation — setting up Harris as a natural successor.

Adrianne Shropshire, executive director of BlackPAC, which works to mobilize African American voters nationally, said Harris will necessarily stay focused on defeating Trump in November, not future presidential races. But she said her speech will likely carry special significance for women around the country that could resonate for years.

“The historic nature of this, I don’t think can be overstated,” Shropshire said. “It will be a really profound moment for women.”

The campaign is also deeply personal for Harris. During her first appearance with Biden last week, she spoke of her friendship with the former vice president’s son Beau, who died of brain cancer in 2015. He and Harris had became close while both were state attorneys general.

“He really was the best of us. And I would ask him, ‘Where’d you get that, where’d this come from?’ He’d always talk about his dad,” said Harris, her voice thick with emotion, during her first joint appearance with Biden last week at a high school gymnasium near his home in Delaware.

The former vice president said that relationship had made Harris “an honorary Biden for quite some time.”