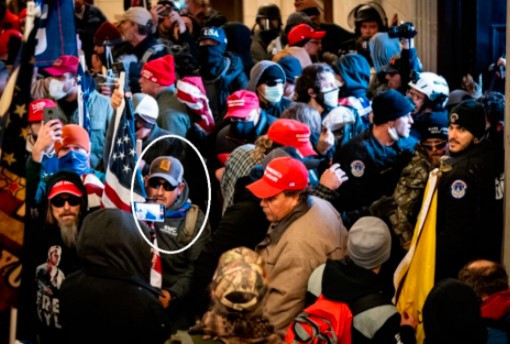 A Jurupa Valley man was arrested Thursday, Feb. 25, and charged with being one of the rioters who stormed the U.S. Capitol on Jan. 6 in support of President Donald Trump as Congress attempted to certify the Electoral College balloting that put Joe Biden in the White House, the FBI said.

Hernandez was charged with obstruction of justice/Congress, two counts of knowingly entering or remaining in any restricted building or grounds without lawful authority and two counts of violent entry and disorderly conduct on Capitol grounds, according to the complaint filed Feb. 23 in U.S. District Court for the District of Columbia.

An FBI special agent who wrote an affidavit to obtain an arrest warrant said Hernandez was unlawfully inside the Capitol.

On Jan. 19, the FBI interviewed a manager at Hernandez’s employer who said the company received a complaint that an employee, later identified as Hernandez, was seen inside the Capitol while wearing a shirt and hat that had the name of the company on them.

The name of the company was not disclosed.

Thursday afternoon, Hernandez appeared in U.S. District Court in Riverside, where he was expected to be released on a $50,000 bond and be ordered to appear in district court in Washington by March 4, Eimiller said.

The FBI said it found several social media accounts that are either believed to belong to Hernandez.

Posts on those accounts indicate that Hernandez believes in ideologies including Q-Anon, conspiracy theories including election fraud and some related to the coronavirus pandemic, finance and science, the affidavit said.

One post has a photograph of a burning Q over a United States seal. “Q” is a letter/symbol that has been associated with Q-Anon, which purports that America is run by a cabal of pedophiles and Satan-worshippers who run a global child sex-trafficking operation and that Trump is the only person who can stop them.

Most of the messages on Hernandez’s Twitter feed, @drewalan3, are retweets of others’ writings. One message he retweeted says that Democrats for four years had attempted “a coup to overthrow” Trump.

“Their army exists of lawyers & lawsuits, baseless allegations & investigations, smears 24/7 by the media, the deep state, and paid terrorists Antifa/BLM,” the tweet says.

In one of his own tweets, Hernandez responds to another poster by saying “We The People Are With you! WWG1WGA! DO it Q! For God and Country!”

WWG1WGA is an acronym for Q-Anon’s rallying cry, “Where we go one, we go all.”

“They are trying to steal the vote and will perfect and protect their fraudulent voting system when in power… You will have a tyrannical dictatorship. Fight Fight Fight,” he wrote.

None of Hernandez’s relatives could immediately be reached for comment Thursday. Hernandez is listed in public records as president of Patriot Concrete, although records show that could be closed. Public records also show Hernandez has a baton license granted by the Bureau of Security and Investigative Services.

More than 250 people have been charged in the riot. According to the NPR database, 15 Californians have been charged, including Christian Secor of Costa Mesa, Mark Steven Simon of Huntington Beach and Kevin Michael Strong of Beaumont.