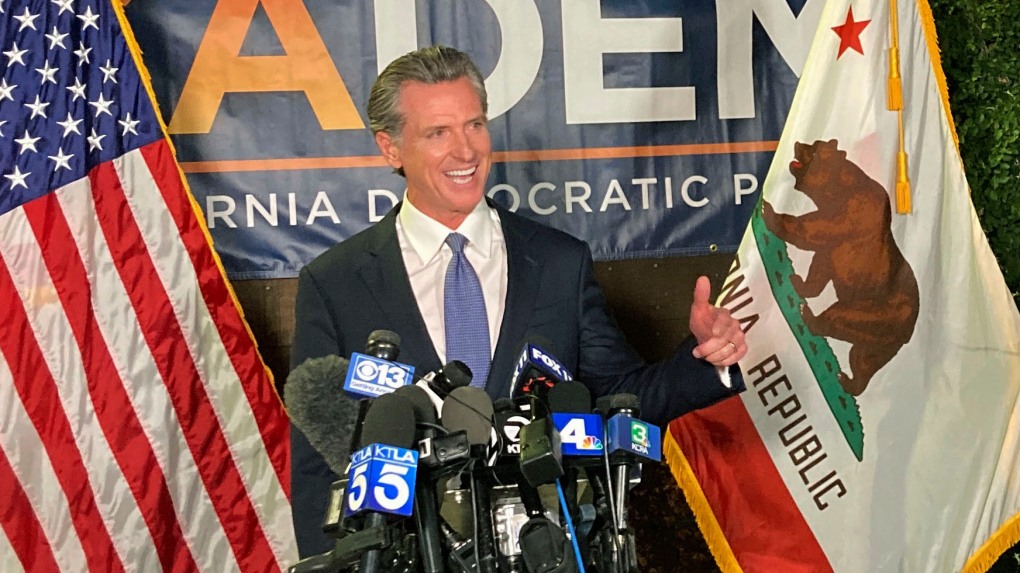 California voters rejected a push to recall Gov. Gavin Newsom on Tuesday, offering Newsom at least another year in office and Democrats a potential playbook to beat Republicans if they back Trump-style ideals and politicians in future elections.

Initial results, based on Democrat-heavy mail-in ballots, showed Newsom surviving the recall push by margins too big to be defeated by Republican-leaning walk-up voting on Tuesday. By 9 p.m., the Associated Press and other media organizations called the vote for Newsom.

“’No’ is not the only thing that was expressed tonight,” Newsom said at a news conference in Sacramento on Tuesday night. “I want to focus on what we said ‘yes’ to as a state: We said yes to science, we said yes to vaccines, we said yes to ending this pandemic.”

The vote came after leading GOP candidate Larry Elder, who had a clear lead in the field of 46 hopefuls who wanted to replace Newsom, and former President Donald Trump both made claims of voter fraud before any votes had been counted.

Though Elder and several hundred of his supporters gathered Tuesday night in a ballroom at the Hilton in Costa Mesa for what they called a “victory party,” his team already put out statements attributing a predicted loss to unproven claims of voter fraud.

Such fraud, to date, has not been found. Southern California election officials said some routine voting issues, such as equipment needing to be replaced and a worker making an error about coding on a small number of ballots, were reported and addressed. But they also said the vast majority of vote centers ran smoothly.

“We may have lost the battle but we are going to win the war,” Elder said late Tuesday.

But in-person numbers cast Tuesday were only a fraction of this year’s vote. More than 9 million Californians cast ballots prior to Election Day, and overall turnout is expected to approach 50%. Democrats outnumber Republicans in California by two to one. And there was no evidence of independent and third-party voters breaking strongly against Newsom, leaving Republicans short of the votes they needed to win the recall.

Bil Gaines, a 40-year-old Democrat from the unincorporated Riverside County community of Winchester, mailed in his ballot to vote against the recall.

“I’m not the world’s biggest Newsom fan, but the Republican Party scares the hell out of me,” Gaines said. “I don’t want to give up the state’s top job to one of a motley collection of wannabe fascists, talentless TV personalities, and corporate climate deniers.”

In the San Fernando Valley, David Lawrence left the vote center at El Camino Real Charter High School on Tuesday declaring that it was time for Newsom to go.

“I don’t care if it’s a Democrat or a Republican. I just want someone to manage the state,” he said.

Others, however, said the alternatives to Newsom – including Elder and leading GOP politicians like John Cox and former San Diego Mayor Kevin Faulconer – weren’t offering realistic ways to fight the pandemic and revive the economy.

“The fact that the Republican front runner is a conservative talk radio host is pretty ridiculous,” said Ryan Maguire, a 34-year-old Democrat from Murrieta.

When asked what he thought made public opinion swing toward Newsom in recent weeks, recall spokesman Randy Economy pointed to Elder.

“I know he’s a very popular talk show host,” Economy said. “But I think a lot of people on both sides of the aisle have great concerns about him and his leadership skills.”

Fred Smoller, a political science professor at Chapman University in Orange, said early results suggest “a blowout” for Newsom. And if that holds, he said, Newsom has mail-in voting, “which made it much easier to vote, and Larry Elder, who ginned the Dem base, to thank.”

But 90-year-old Republican Jan Edwards of Woodland Hills said she enthusiastically cast her ballot to have him replace Newsom.

“He’s a good communicator and he has the right ideas,” Edwards said. “He’s all for freedom.”

Despite her enthusiasm for Elder, Edwards said she “knew this election would be rigged.” She cited what turned out to be a technical error that popped up at her vote center on Saturday, which led a worker to mistakenly tell a group of voters their ballots had already been cast.

The issue was fixed, according to the Los Angeles County Registrar-Recorder’s office, and Edwards was able to vote with a provisional ballot. But she said she notified conservative watchdog groups about what happened after Elder and other GOP leaders told voters to be on the lookout for fraud.

Others echoing the fraud claim included former President Donald Trump, who said in a statement Monday: “Does anybody really believe the California Recall Election isn’t rigged?”

Since losing re-election, Trump has spread baseless claims about voter fraud that have been denied in dozens of court cases. Critics say the claims undermine democracy and backfire on Republicans by depressing GOP turnout.

The only confirmed report of a law being broken related to voting in Southern California happened Tuesday morning in L.A. County, when an election worker was told to leave after wearing a pro-Trump hat and a t-shirt that made a reference to President Joe Biden’s son, Hunter. A photo of the poll worker gained traction on social media.

Even as major media outlets and the AP called the election for Newsom, Debra Lallo, a recall organizer from Yucaipa in San Bernardino County, was still hopeful the recall would prevail.

“I cannot believe they’re calling this race when they haven’t counted all of the ballots yet,” she said. “ … If it doesn’t happen … the state of California is lost, in my eyes.”

That same sentiment carried over to Elder’s campaign party in Costa Mesa, where the mood remained festive after the race was called.

Kirk Crawford, a Huntington Beach retiree, said it was probably too early to call the race. He noted that most of his friends waited until Tuesday to vote in person, so their votes were probably not included in early returns. But he was also sober about the recall’s chances, given Democrats’ advantage in voter registration.

“I don’t know that we came here with high expectations,” he said.

By law, elections officials have to count all ballots that arrive to their offices within seven days after Election Day, so long as they were postmarked by Sept. 14. Results will be certified and final in 30 days.

By defeating the recall, Newsom now will serve the remainder of his term, which ends Jan. 2, 2023. He’s expected to seek re-election, in a vote that will take place in November of 2022. Elder has said he plans to run against Newsom.

But for Elder or any other Republican to unseat Newsom, some observers suggested the party might have to offer a more moderate alternative. Smoller of Chapman said, “Republicans will have to rethink who they are and what they stand for or remain permanently marginalized in state politics, which is not good for democracy.”