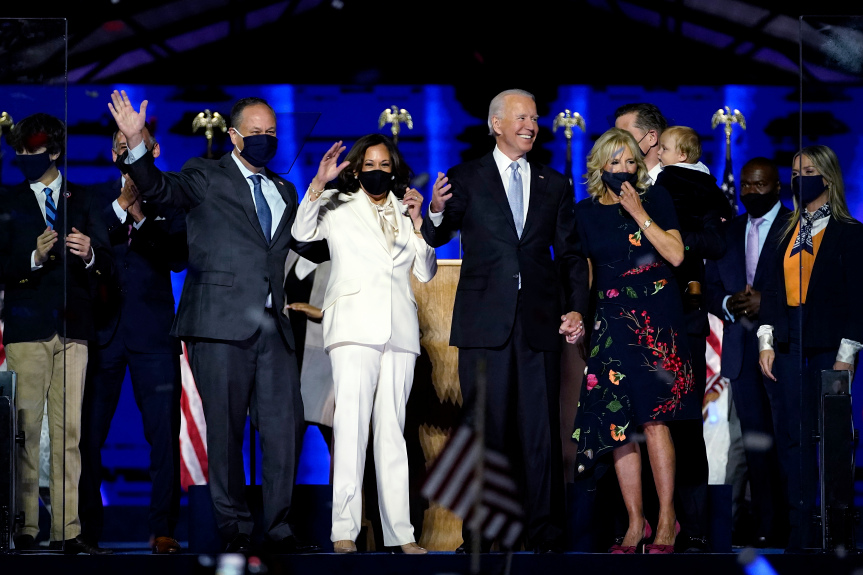 Come January’s inauguration, Emhoff, 56, will become the nation’s first-ever “second gentleman.” Some have been toying with “SHOUS” (for second husband of the United States) for Emhoff’s moniker, but it remains to be seen if that will stick.

Joining his history-making wife — the first woman and person of color to hold the vice presidency — he’ll be the first Jewish spouse of any gender married to a president or vice-president.

On Monday, Emhoff was still basking in the glow Saturday’s projected victory for the Biden-Harris ticket, which puts him and his wife en route to the vice presidential residence at the U.S. Naval Observatory.

In the meantime, CSUN couldn’t help but voice a little hometown pride.

“#CSUN alumnus @DouglasEmhoff is projected to head to the White House as the nation’s first “second gentleman,” the university tweeted.

It was an echo of what was already a shiny moment for the university.

“It’s incredibly exciting to have a CSUN alumnus be part of this historic moment,” CSUN President Dianne F. Harrison said when Biden picked Harris as his running mate. “Doug Emhoff has had an important and influential career in the legal profession, and we are proud to call him a Matador.”

It wasn’t terribly long ago that Harris, the state’s attorney general at the time, visited the campus for a get-out-the-vote rally for her run for the U.S. Senate. By her side was Emhoff.

The two were fresh off getting married in 2014.

The campus’ newspaper, The Sundial, captured the moment: “I’m so excited to be here! Because the love of my life, my best friend, is a Matador,” Harris said, as she introduced Emhoff to a crowd in a classroom at the university’s Jacaranda Hall. “If it hadn’t been for CSUN and the great education he got here, he wouldn’t have been able to go on to law school.”

The couple are both members of the CSUN President’s Associates philanthropic support organization and longtime supporters of the university, according to the university.

Emhoff was born in Brooklyn, raised in New Jersey and moved with his family to Southern California at age 17, where he graduated from Agoura High School.

After attaining his degree at CSUN, he would go on to graduate from USC Gould School of Law.

Fueled by a niche in entertainment law in Los Angeles, he’d make his way to the international law firm DLA Piper, but not before opening his own law firm in 2000 that was later acquired by Venable, another top-tier, L.A.-based firm.

Along the way, though, his star rose, as he gained a reputation for building teams. It was unclear if his reputation for being an avid golfer with a handicap in the teens at all fueled his rise.

But ultimately, he is an entertainment lawyer specializing in media, sports and entertainment, and representing corporations and high-profile individuals in business, entertainment and intellectual property litigation disputes. He is licensed to practice law in California, and  it just so happens Washington, D.C., according to CSUN.

The DLP Piper connection initially raised questions over how he might navigate his legal career as second gentleman. The firm’s federal lobbying clients are said to include Qualcomm Inc., Comcast Corp., Raytheon Co. and the government of Afghanistan.

However, it was announced Tuesday that Emhoff, will resign his role with DLA Piper to focus on his role in the new Biden administration.

A campaign spokeswoman said Emhoff will sever ties with the firm by Inauguration Day.

Emhoff took a leave of absence from the firm in August, when Harris was named Joe Biden’s running mate. Biden and Harris will be inaugurated Jan. 20.

“I am sure the Biden administration will be as cautious as possible to avoid any improprieties or the perception of conflict of interests,” said Katherine Jellison, a professor at Ohio State University who specializes in U.S. history, women and gender and the study of first ladies.

For the moment, Jellison is struck by the sheer cultural impact of the confluence of firsts in the White House — and much of that is because of the CSUN graduate, Emhoff.

On one hand, you have Emhoff’s role as second gentlemen, but there’s first lady Jill Biden herself, an English professor who has said she plans to continue to teach — potentially the first first lady ever to have a paid job outside the White House. And, of course, there’s Harris.

“Between the two — Doug and Jill Biden —  they may really bring these roles into the 21st Century,” Jellison said.

Emhoff is also the first Jewish person to ascend to the post — a fact not lost on observers and scholars, given how close the nation has come before.

Former Sen. Joe Lieberman was within grasp of the White House in 2000, as Al Gore’s running mate.

In 1988, Kitty Dukakis was on the cusp of being the first Jewish first lady before her husband Mike Dukakis lost the election to George H.W. Bush.

“We’ve come close to having someone of Jewish ethnicity and religion … but  this will be the first,” Jellison said, noting that Emhoff represents a step forward to a White House that reflects the diversity of the nation.

“It’s pretty exciting, because we have an opportunity perhaps to reinvent the role of first or second spouse by having a man in that position, and to change our perspective of what that person can and should do,” Jellison said.