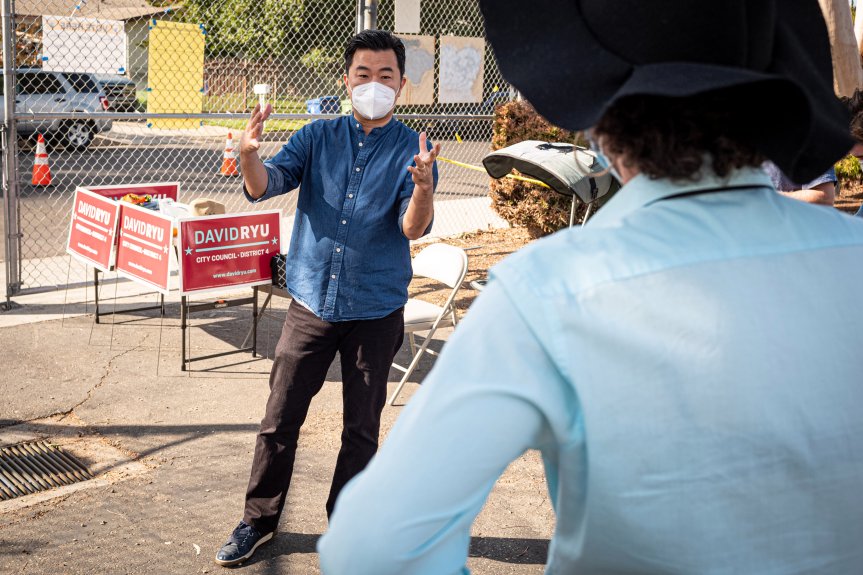 Councilmen David Ryu and Herb Wesson bid farewell to the Los Angeles City Council, as Ryu was defeated in the November general election and Wesson was termed out.

Wesson thanked everyone in Los Angeles on Wednesday, Dec. 9, including those who criticized or said hurtful things to him. He even thanked the children who used to beat him up in his native city of Cleveland because he said those experiences made him “tough.”

“Even though this is a bittersweet moment because I’m going to have to leave, I am finalizing the last touches on this chapter in my life,” said Wesson, a member of the council since 2005 and council president from 2011-19.

A video was played of Wesson’s career on the council, and members took turns listing his accomplishments, which included criminal justice reform, the creation of the Office of Racial Equity and his efforts to address homelessness as well as tackling the after-effects of the “war on drugs,” which disproportionately jailed many people of color when it was in full force.

Wesson also highlighted his efforts to raise the minimum wage in Los Angeles.

“I’m here for a friend, a brother, a compatriot, a comrade and as you just saw in this video, somebody who literally is part of the foundation of our city,” said Mayor Eric Garcetti, who joined the council meeting remotely to honor Wesson.

“Herb Wesson, I want to thank you for the gifts you’ve given me and my team.”

Wesson, the first Black Los Angeles City Council president, said one of his grandchildren had to do a report on Black history and decided to write about their grandfather.

“How many people will have that opportunity?” he said.

Wesson requested that he be brought back to the Council Chamber for an “honorary vote” when the motion to establish teams of unarmed experts to respond with or instead of police officers to nonviolent emergency calls.

Wesson represented Council District 10, which includes Koreatown, Arlington Heights, West Adams Heights and Sugar Hill. He will be succeeded by Mark Ridley-Thomas, who had represented District 8 from 1991-2002.

Wesson unsuccessfully sought to succeed Mark Ridley-Thomas in the Second District seat on the Los Angeles County Board of Supervisors, but was defeated by Holly Mitchell.

Ryu was elected to the City Council in 2015, when he ran on a platform of progressive reforms. Ironically, his opponent, Nithya Raman, ran her campaign on an even more progressive platform to unseat him.

Ryu mentioned his work to fix streets, protect wildlife, his approaches to solving homelessness and poverty, but may be best known for his work on campaign finance reform, as he headed a successful effort to put some restrictions on the ability of real estate developers from contributing to campaigns for city council and citywide candidates.

Ryu also took actions to address issues of corruption that had followed the council in recent years.

“Five years ago, when I was elected to represent the people of Council District Four, I was a political newcomer,” Ryu said.

“I didn’t have any endorsements from inside City Hall, and I ran not to join the system but to change it, through anti-corruption reform radical transparency and a commitment to put neighborhood voices first in my decision-making.”

Ryu said he has confidence in the city government’s future in the midst of one of the most challenging moments Los Angeles history due to the COVID-19 pandemic.

“For the first time since I got here, we are taking seriously the corruption that undermines our local government, addressing the underlying issues that are at the root of our problems and breaking down silos and bureaucracy to deliver an emergency … response to the crisis of our time, homelessness,” Ryu said.

“I may no longer be a City Council member, but I will always be an Angeleno.”

The dates of the swearing-in ceremonies for Raman and Ridley-Thomas have not been established.