Celebrations, protests hit the streets in wake of Biden/Harris victory 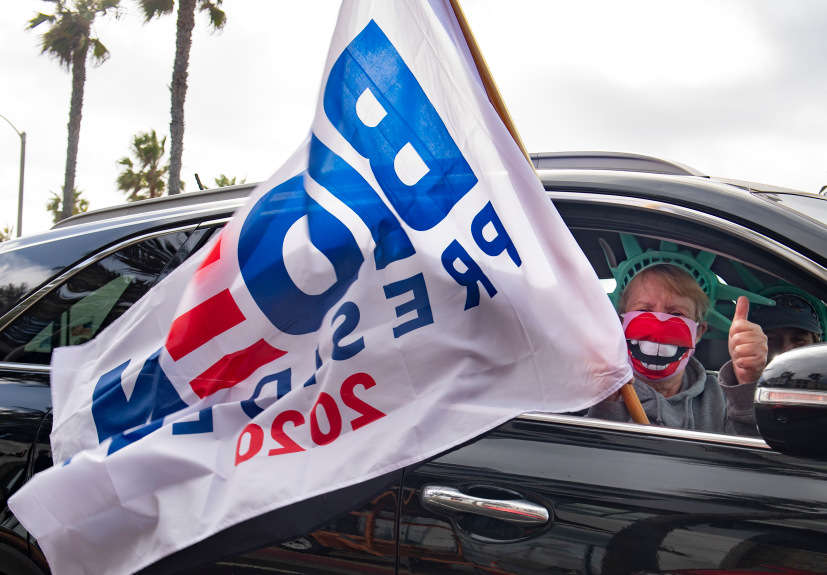 Thousands of people turned out in downtown Los Angeles and elsewhere in Southern California in the wake of Joe Biden’s election victory to celebrate the win, defend democracy and demand an end to white supremacy.

Various groups led in part by United Teachers Los Angeles, Black Lives Matter and others converged at Pershing Square  to rally for a March toward City Hall.

The streets throughout downtown Los Angeles Saturday were filled with celebrants, some dancing, others honking car horns. A flatbed semi-truck blocked the intersection at 5th and Hill streets where demonstrators waved flags and held protest signs.

Chantelle Hershberger with Refuse Fascism yelled through a megaphone at the corner, demanding President Donald Trump accept the loss and vacate the White House.

“National unity is not going to happen until there is a movement of people on the right side of history,” Hershberger said.

“We must take to the streets to ensure the will of the people,” Hershberger said. “Fascism is never legitimate. I don’t think we need to reach across the aisle with white supremacists. They aren’t going to give up.”

“The President is trying to delegitimize black and brown votes,” Myart-Cruz said. “At what point do we stand up for what’s right? I would say right now.”

BLM LA co-founder Melina Abdullah addressed the crowd gathered at Pershing Square. “What we voted for was removing the most racist, repressive, violent and most vile occupant of the White House we’ve seen in our lifetimes,” Abdullah said. “This moment is a victory for the people but we won’t just hand that … over to Biden and Harris for nothing. We want something for our votes.”

Biden was declared the winner of the presidential election by multiple media outlets at around 8:30 a.m. PST after reports surfaced that he would win Pennsylvania’s 20 electoral votes, putting him over the 270 needed to win the presidency.

An hour before Biden was declared the winner, Trump issued an all-caps tweet that said, “I WON THIS ELECTION, BY A LOT!”

In a statement, Trump reiterated false claims that votes are being counted improperly. Trump’s team has filed a smattering of lawsuits in battleground states, some of which were immediately rebuffed by judges. His personal lawyer, Rudy Giuliani, was holding a news conference in Philadelphia threatening more legal action when the race was called.

In Mission Viejo, dozens of Trump supporters gathered in the parking lot of the Shops at Mission Viejo Saturday morning. Trump and American flags, mounted on their cars and trucks, flapped in the wind. Rain trickled down as Twisted Sister’s played on oversized speakers, “We’re not gonna take it.”

The mall was the staging area for a caravan headed to Beverly Hills, where a large rally was held.

Huntington Beach Lt. Brian Smith said two women were detained after a fist fight broke out. One woman had a swollen eye.

A few hundred people rallied in Trump’s support at the corner of Canon Drive and N. Santa Monica Boulevard in Beverly Hills. Supporters wore MAGA hats and campaign t-shirts, and passing drivers blew horns as the crowd cheered back.

A fight nearly broke out between a Biden and a Trump supporter.

Many of the streets around the Beverly Hills shopping district were closed and shops remained boarded up as they have been all week.

A spontaneous celebration of Joe Biden’s presidential victory broke out on Sunset Boulevard in Silver Lake, with hundreds of revelers lining the streets, dancing to music and cars bearing American flags driving through beeping their horns. Another peaceful celebration was held in West Hollywood.

In Long Beach, about 50 people congregated outside City Hall for a peaceful demonstration set up by various organizations, including Long Beach Forward, Long Beach DSA, Long Beach Immigrant Rights Coalition and BLM LBC. Heavy rain, and even a little hail, bombarded protestors while organizers delivered messages of hope and calls to action on the steps of city hall. Passing vehicles blared horns in support.

“I’m ecstatic, I feel like my jaw has been permanently clenched for the last four years,” said Sara Donelly, 23 of Long Beach. “But the corruption doesn’t end with Trump.”

“Its a small victory but I can’t imagine Trump going quietly,” said E’aren Roberts, 27, a Long Beach resident. “He spent months after he won his election complaining about corruption in California. I feel like we have a long two months ahead of us.”

An impromptu celebration over Biden’s victory popped up in Irvine Saturday afternoon, as dozens gathered on the corner of Alton Parkway and Culver Drive. They were not dissuaded when the rain came down in buckets.

Helen Conroy, 65, jumped up and down. She seemed at a loss of words to describe her happiness. She said she was celebrating “decency.”

“Donald Trump has taken this country hostage, said Hellier, who waved a large American flag. “He has broken every norm this country stands for. We need peace and healing.”

The Associated Press and City News Service contributed to this report.