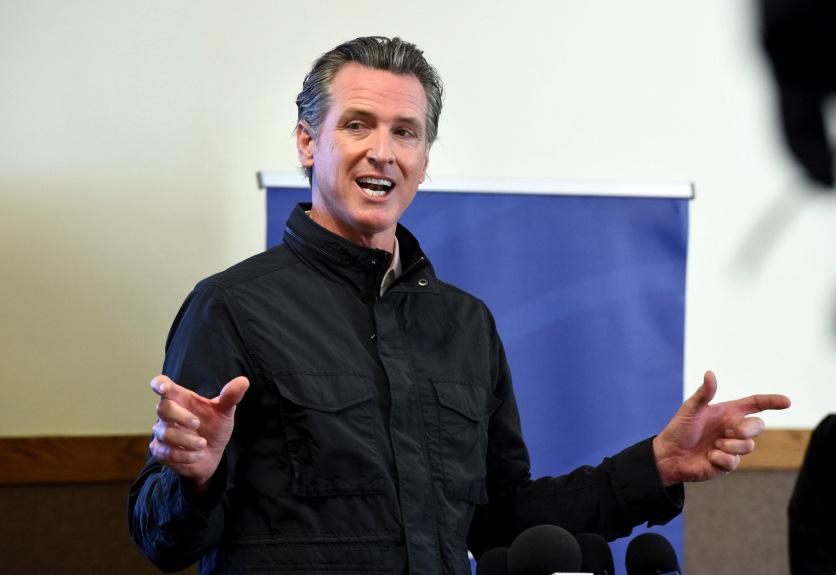 Once those 2 million doses are delivered (California was at 1.9 million, Newsom said), a county can move from the state’s most-restrictive “purple” tier to the second most-restrictive “red” tier if the new daily case rate is under 10 per 100,000 rather than the current 7 per 100,000. Counties under the new case rate benchmark would officially enter the red tier 48 hours after the state passes the vaccination target.

L.A. County, which has been under 10 daily cases per 100,000 people for two weeks, could enter the red tier on Sunday, setting the stage for reopening high schools and middle schools, as well as many indoor activities, such as dining and going to a movie — though with severely reduced capacity.

Many other counties up and down the state are in the same position. Local health jurisdictions — generally counties, but sometimes individual cities — must update their health orders to loosen restrictions.

Delivering vaccines in the areas hardest hit by COVID-19 became a priority in recent weeks, as state and local officials noticed distribution to those areas was falling short. The state vowed to allocate at least 40% of doses to the most underserved communities in an effort to inoculate more low-income residents, essential workers and people of color from the coronavirus.

“The expectation in this state needs to be raised in terms of truly delivering on equity,” Newsom said Wednesday from a pop-up vaccination site in South Gate, which recently opened after local community leaders asked the state for help.

Local leaders in South Gate, together with Assemblywoman Cristina Garcia and the Southeast L.A. Collaborative, helps set up the site in a matter of days, with the help of the Federal Emergency Management Agency.

The site opened on Friday and by Saturday more than 500 people had signed up to receive vaccines; more than 1,000 people were on a waiting list.

“We are making sure that community members are getting shots,” Garcia said.

One way organizers have ensured doses go to local community members has been to bypass the state’s My Turn website for appointments. The state, Newsom said, was working out how to designate appointment slots by offering single-use booking codes rather than group booking codes, which can be widely disseminated and abused.

As Newsom spotlighted the South Gate site and other efforts to narrow gaps in vaccine disparities, county leaders in Los Angeles and elsewhere were pushing back on an effort to install Blue Shield of California as the overarching vaccine administrator in the state.

Specifically, L.A. County officials said on Tuesday they were concerned the partnership with Blue Shield would create a bureaucratic headache for providers and could actually set back their efforts to address equity by focusing too heavily on performance metrics and possible punishments for not meeting certain goals.

And L.A. County officials were not alone, as several others have pushed back against the Blue Shield plan, with just one county — Kern — so far agreeing to a contract with the insurer.

Officials with many counties have said they believe they are better suited to manage a vast network of providers, which in L.A. County totals more than 400 locations. Officials there don’t necessarily feel comfortable or confident handing the reins over to a giant health insurance company.

Addressing those concerns on Wednesday, Newsom urged patience, saying state officials and Blue Shield will take the next month to work out those details and put any concerns to rest.

“We are making progress,” Newsom said. “We will work through these issues.”