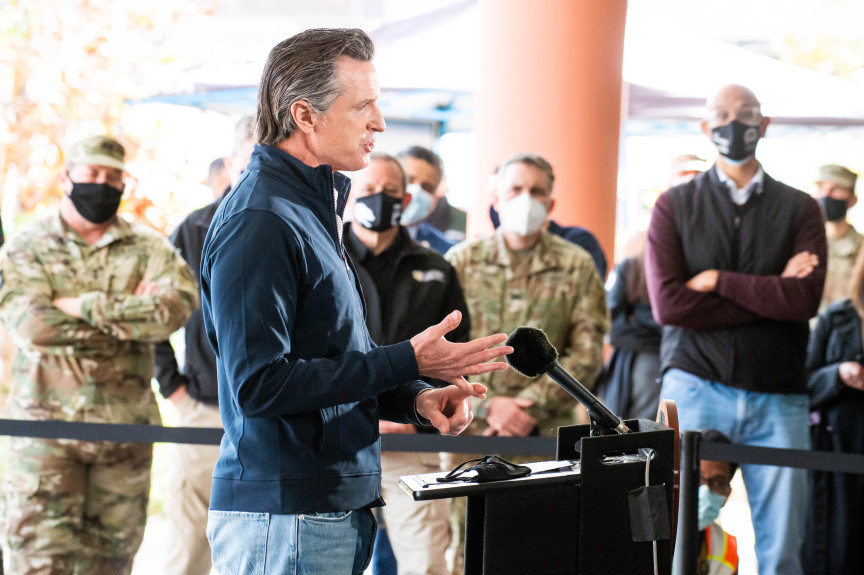 A massive COVID-19 vaccination site opened at Cal State Los Angeles on Tuesday, where Gov. Gavin Newsom and a slate of military, federal and local leaders ushered in the first of what is expected to be 100 such sites across the nation — all of them federally supported and state-managed.

Newsom declared the sprawling campus maxi-center a significant step toward assuring equity in delivering the vaccines, determinedly placed amid a hot zone for COVID-19 surrounded by multiple densely populated communities of color.

“This is a framework, a focus not just on efficiency, not just speed but on the issue of equity, that’s what brings us here today,” said Newsom, as he launched the site in a morning briefing. “It’s not just the spirit, not just the platitude of this being a North Star, but this is what this site is all about — proximate to to a community that has been disproportionately impacted by this pandemic.”

The site — along with a sister site at Oakland’s Alameda County Stadium — was expected to offer 3,000 doses on Tuesday — and end the week doubling that rate to 6,000 at each site, a level it should be able to maintain for the foreseeable future.

Newsom stressed the federally buoyed sites will work “separate and above” already established mega-pods that dot the Southland — including, not far away, five Los Angeles County-operated clinics in Pomona, Northridge, Inglewood, Downey and Valencia, the massive L.A. City-operated Dodger Stadium complex and Orange County’s first mass-vaccination center, located in a Disneyland parking lot. Sporadic, unpredictable supplies from the federal stockpile, which are directed via a state allocation system, have hampered vaccination efforts at such locations, as well as dozens more.

That new twin sites’ inventory taps a flow that is independent of what is allocated to the states and won’t reduce the number of doses allotted to existing free public sites, Newsom said.

Officials on Tuesday cast the effort in terms of establishing a war-like footing against the virus, including the Biden Administration’s decision to mobilize the federal government, including its military and disaster-response resources.

But Job One, officials said, was to get vaccinations into the arms of people in marginalized communities  — many of which neighbor the university — in an effort a military leader described as a classic case of homeland protection.

“I can promise you these efforts will save lives — American lives,” said Gen. Glen Vanherk, commander, U.S. Northern Command. “What we face today is a threat to the homeland. It may be a little bit of an asymmetrical threat called COVID. But there’s no more sacred and noble mission than taking care of one’s family here in the homeland. That’s what we are doing here today, is taking care of folks right here.”

“We are grateful to President Biden and Governor Newsom for marshaling federal and state resources to significantly increase our ability to vaccinate our residents in Los Angeles County,” said Hilda Solis, chair of the county Board of Supervisors.

The CSULA site will be co-run by the Federal Emergency Management Agency and the state of California, through the governor’s Office of Emergency Services.

A team of more than 200 soldiers, deployed from Fort Carson in Colorado, arrived in Southern California last last week to help establish and staff the complex.

FEMA will provide resources and federal staffing personnel, as well as operational support.

“Cal State L.A. is ready to work with President Joe Biden, Gov. Gavin Newsom and their administrations to provide badly needed vaccinations,” said Jose Gomez, the university’s executive vice president and provost. “Our students and alumni live in communities with some of the highest COVID-19 infection rates per capita in Los Angeles County.”

“Our county — and in particular our Latinx residents — have been absolutely devastated by COVID-19. Establishing this large scale federal-state community vaccination center on the Cal State L.A. campus, in the heart of Los Angeles County and in a hard-hit community, is a welcome signal that we are ramping up at the federal, state and local level with the practical, boots-on-the-ground solutions we need to put an end to this deadly pandemic.”

Newsom, along with L.A. Mayor Eric Garcetti, acknowledged that the thin, inconsistent supply of doses was preventing the vaccination drive across the Southland from reaching its full capacity. Nonetheless, Newsom said, it’s still critical to build out the state’s capacity so that when ample supply does come, the infrastructure will be in place to administer doses en masse.

Metrolink is offering a direct connection to the site. Metrolink’s Cal State LA Station is on the San Bernardino Line. Riders can reach the walk-up vaccination location by taking the elevator or stairs from the train platform to the university transit center and following directional signs to Structure A. Shuttles will take people from the transit center to the vaccination site.

“With a county this size, offering transportation options to vaccination sites is critical,” said Solis, a Metrolink board member. “… I am grateful that Metrolink will serve as a vital and accessible link for so many of our residents who rely on public transportation.”

Registration for vaccine appointments at the Cal State L.A. site will be available at https://myturn.ca.gov/. There is also a phone number: 833-422-4255.