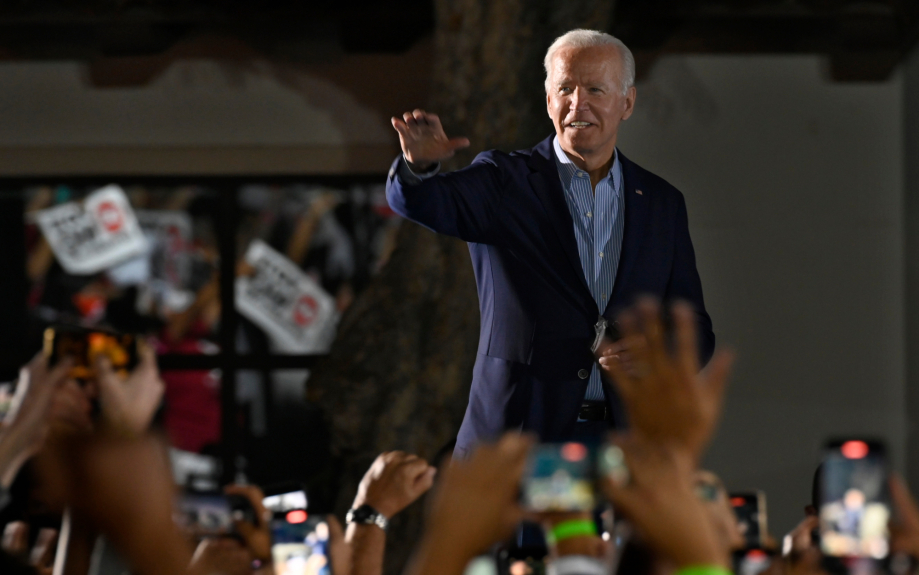 With one day of voting left in the California recall, President Joe Biden told a crowd of supporters at Long Beach City College that they should keep Gov. Gavin Newsom in office so he can keep coronavirus at bay, safeguard women’s rights and fight climate change.

That was a frequent refrain at the Monday night rally, which marked Biden’s first California visit since taking office.

Elder’s campaign didn’t immediately respond to a request for comment, but has previously slammed those who’ve tried to make this election about Trump instead of Newsom.

Recent polling bodes well for Newsom, with most showing voters opposing the recall. Data on early voting also looks good for the governor, with a Friday update from Political Data Inc. showing Democrats, who largely support Newsom, overperforming in terms of turnout by six percentage points while Republicans, who largely oppose the governor, were underperforming by two points.

But Trump and other GOP leaders have discouraged mail-in voting over the past year, meaning a large percentage of Republicans voters are expected to cast ballots on Election Day. So the anti-recall side continues to push, with the governor and his supporters spending some $60 million in recent weeks. The anti-recall side also has seen a steady flood of endorsements from high-profile party leaders. Sens. and former presidential candidates Elizabeth Warren, Bernie Sanders and Amy Klobuchar have all released campaign ads supporting Newsom. New York Rep. Alexandria Ocasio-Cortez did an Instagram video for the governor, while former President Barack Obama shared a video last week urging Californians to reject the recall. Vice President Kamala Harris also stumped with Newsom in the Bay Area on Wednesday.

Those efforts culminated Monday night in Biden’s appearance at Long Beach City College, which was open to campaign volunteers, Democratic leaders and some invited students from the college.

A parade of California’s statewide elected officers and local, state and federal politicians spoke in support of Newsom.

“California proudly leads the nation in so many ways, and that’s why we can’t let Republican Larry Elder take us back to the Trump years,” Sen. Alex Padilla said.

“Governor Newsom has led the state and kept people safe. He has followed the science and made the tough calls,” said Long Beach Mayor Robert Garcia, a close ally to both Newsom and Harris. “But now Larry Elder and Trump extremists want to take us backward. … Not on our watch.”

A few hundred people gathered outside the event to protest, and occasional chants of “recall Newsom, impeach Biden” could be heard inside the venue.

Recall proponents were quick to criticize Biden’s local campaign stop, noting that inconveniences Long Beach residents and saying it distracts the president from other pressing issues.

“(Newsom has) pulled in a president and a vice president during an international crisis when they should be bringing hostages home from Afghanistan,” said Anne Dunsmore, campaign manager for Rescue California, which has helped fund and coordinate recall efforts.

“That just tells me that he still doesn’t think he can win.”

When asked about the campaign pulling Biden’s focus from Afghanistan, Newsom campaign manager Juan Rodriguez said, “I was proud to cast my ballot for Joe Biden and I’m happy that he can multitask. There are a lot of issues facing this country and Larry Elder would be a significant threat not just to California but to the rest of the globe.”

“I think, at this point in the game, nobody really cares one way or the other what Joe Biden thinks about Gavin Newsom,” said Randy Economy, who’s been a spokesman for the recall effort.

Economy called the recall, which is expected to cost taxpayers $289 million, a “deeply personal election between the people of California and its governor.” He added that Biden’s visit is “nothing more than ego stroking for Gavin Newsom.”

But Marcia Godwin, a public administration professor at the University of La Verne who closely tracks local elections, said the visit could provide a last-minute boost for Newsom, who she noted is rooted in the Bay Area and still getting to know voters in Southern California.

“This is a good way to energize the Democratic base and remind any reluctant voters to turn in their ballots,” she said. “Newsom appears to have the election well in hand, but it doesn’t hurt to avoid any unwelcome surprises.”

Biden’s trip to Long Beach was part of a western swing that also included stops in Boise, Idaho, and the Sacramento area to survey damage from recent wildfires.

The president’s first trip to California as president comes eight months into his term — a bit later than visits by other recent presidents with the exception of Trump.

Though he campaigned and raised funds in California before his election, Trump drew headlines for being the first president since Dwight D. Eisenhower 64 years earlier to skip visiting the Golden State during his first calendar year in office. Trump came to California during March of his second year in office, spending a day here in spring 2018 to visit the border wall in San Diego and attend a fundraiser in Los Angeles.

Obama came to California less than two months after taking office in 2009, attending a town hall in Costa Mesa and several other locations during that two-day visit. President George W. Bush visited California four months into his first term.

“Trump set a precedent for avoiding California visits, but Biden is overdue for a visit to wildfire sites and possibly locations most impacted by the drought,” Godwin said.

Godwin said she expects more such high-profile visits as we get into the 2022 campaign cycle, both for fundraising and to support candidates after redistricting.

In many ways, observers say this recall against Newsom is an early referendum on how Democrats across the country have handled the coronavirus and other issues that also will be front and center in next year’s midterm election. And with Democratic turnout in the recall looking solid, Rodriguez said he thinks it bodes well for 2022.

“I think it’s a window into what hopefully breaks conventional wisdom about what the midterms have to be, meaning low Democratic turnout.”

Californians, and the nation, will get a first look at results in the recall soon after polls close at 8 p.m. Tuesday.

Those initial results will be entirely from mail-in ballots, which are likely to lean heavily Democratic. The race is expected to tighten later in the night, as results come in that include ballots cast in person on Election Day.