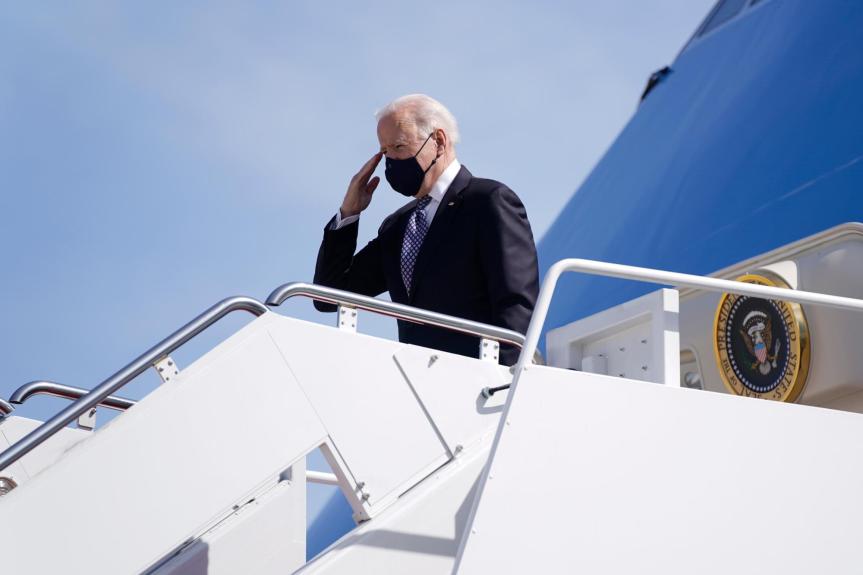 For Asian Americans, 2020 was a year of political success and newfound influence. But it was also a time of vulnerability to racist assaults.

That painful dichotomy is on display Friday as President Joe Biden and Vice President Kamala Harris, the first person of South Asian descent to hold national office, visit Atlanta just days after a white gunman killed eight people, most of them Asian American women, in three metro-area massage businesses. The killings come after a spike of anti-Asian violence nationally.

The presidential trip was planned before the shooting, as part of a victory lap aimed at selling the benefits of pandemic relief legislation. But Biden and Harris will instead spend their visit consoling a community whose growing voting power helped secure their victory in Georgia and beyond.

“He understands and knows that over the past year that the community has been vilified and been scapegoated and they’ve been attacked,” said White House principal deputy press secretary Karine Jean-Pierre. She said to expect Biden to use his remarks to “meet the moment that we are in.”

Before arriving in Atlanta, Biden expressed support for the COVID-19 Hate Crimes Act, a bill that would strengthen the government’s reporting and response to hate crimes and provide resources to Asian American communities.

“While we do not yet know motive, as I said last week, we condemn in the strongest possible terms the ongoing crisis of gender-based and anti-Asian violence that has long plagued our nation,” Biden said in a statement.

As the fastest-growing racial demographic in the U.S. electorate, Asian Americans are gaining political influence across the country. In California, two Korean American Republican women made history with their congressional victories. The Congressional Asian Pacific American Caucus, typically dominated by Democrats, has its largest roster ever, including Asian American and Pacific Islander members and others who represent significant numbers of Asian Americans.

“We’re becoming increasingly more visible and active in the political ecosystem,” said Georgia state Sen. Michelle Au, a Democrat who represents part of the growing, diversifying suburbs north of Atlanta. Yet, Au said, “What I’ve heard personally, and what I have felt, is that people sometimes don’t tend to listen to us.”

Au said a White House spotlight, especially amid tragedy, is welcomed by a community often overshadowed in national conversations about diversity. She notes President Donald Trump and other Republicans merely brushed off charges of racism when they dubbed the coronavirus the “China virus” because of its origins.

Activists have seen a rise of racist attacks. Nearly 3,800 incidents have been reported to Stop AAPI Hate, a California-based reporting center for Asian Americans and Pacific Islanders, and its partner advocacy groups, since March 2020.

In his first primetime address to the nation as president, Biden last Thursday — five days before the Atlanta killings — called attacks on Asian Americans “un-American.”

“To have them talk about it in this way, so publicly, and to say AAPI, or to note that our communities are going through difficult times, is huge,” Au said.

The White House said Biden and Harris will meet Friday with Asian American state legislators and other community leaders before Biden delivers remarks. Jean-Pierre said only Biden was planning to speak publicly. Biden also will visit the Centers for Disease Control and Prevention’s main campus in Atlanta.

As he boarded Air Force One on Friday morning, Biden, who was wearing a mask, stumbled several times up the stairs to the aircraft, before saluting the military officer who greeted him on the tarmac. Jean-Pierre said Biden was “doing 100% fine.”

The originally planned political event to tout the $1.9 trillion COVID-19 relief bill has been scrapped. The White House confirmed that the president also will meet with Georgia voting rights advocate Stacey Abrams, Democrats’ likely 2022 candidate for governor, as Republicans in the state legislature push several proposals to make it harder to vote in the state. He will also meet with newly minted Democratic Sens. Jon Ossoff and Raphael Warnock.

Democrats’ coordinated 2020 campaign in Georgia — the joint effort of Biden’s campaign and state Democrats — tailored a turnout effort specifically to Asian American and Pacific Islanders. The Advocacy Fund analysis concluded that more than 185,000 voted in 2020, a 63% increase from four years prior. Biden ultimately won the state by fewer than 13,000 votes out of almost 5 million cast. Democrats also forced two Senate runoffs that they ultimately won, giving the party control of the chamber.

Now, Georgia Democratic Party staffers have started offering their Asian American outreach program as a model to other state parties.

The freshman congresswoman lost in the suburban Atlanta 7th District by fewer than 1,000 votes in 2018. In November, she won by 10,000 votes, flipping what was once a Republican stronghold. She said her campaign’s data show the share of Asian American voters increased in the district from 7% in 2016 to 11% in 2020 — enough that she considers the community decisive in her political fortunes.

That influence doesn’t only benefit Democrats. In California, where the Asian American and Pacific Islander community has long been a political force, freshman Reps. Young Kim and Michelle Steele, both Republicans, became the first Korean American women elected to Congress while giving the GOP two big pickups.

For example, Priorities’ review of the November election results found that Asian Americans increased their share of the suburban vote in Georgia by 2.5 percentage points compared with 2016. They also made up a notable share of new voters in Arizona and Wisconsin — places where new voters favored Biden and helped drive his victories — the group found.

“We must mobilize these same people in 2022. This is going to be critical for Democrats to maintain our majorities (in Congress) and win governors’ races,” Cecil said.

Au and Bourdeaux said it’s also important for elected officials and others to understand the breadth of the Asian American and Pacific Islander community and not treat it simply as a bloc to be tapped for votes.

Although the Atlanta-area Asian population is overwhelmingly suburban, drawn in part to high-performing public schools, Au said politicians must acknowledge its diversity and economic challenges. “I get it, right, I’m a doctor, too,” she said. “So everyone’s like all Asians are doctors and lawyers and they’re doing great … but that eclipses a huge portion of the AAPI population.”

Bourdeaux praised a “diverse community that is South Asian, Chinese, Vietnamese, Korean, a host of different religions, Christian, Hindu, Muslim, Catholic, Buddhist, non-religious, and so on, just an extraordinarily diverse group of people.”

But that very diversity means some Americans see those differences as a threat.

“We have faced systemic racism, exclusion and violence before,” said Georgia state Rep. Sam Park on Thursday, standing beside his Asian American and Pacific Islander legislative colleagues. “In spite of it all, we have thrived.”