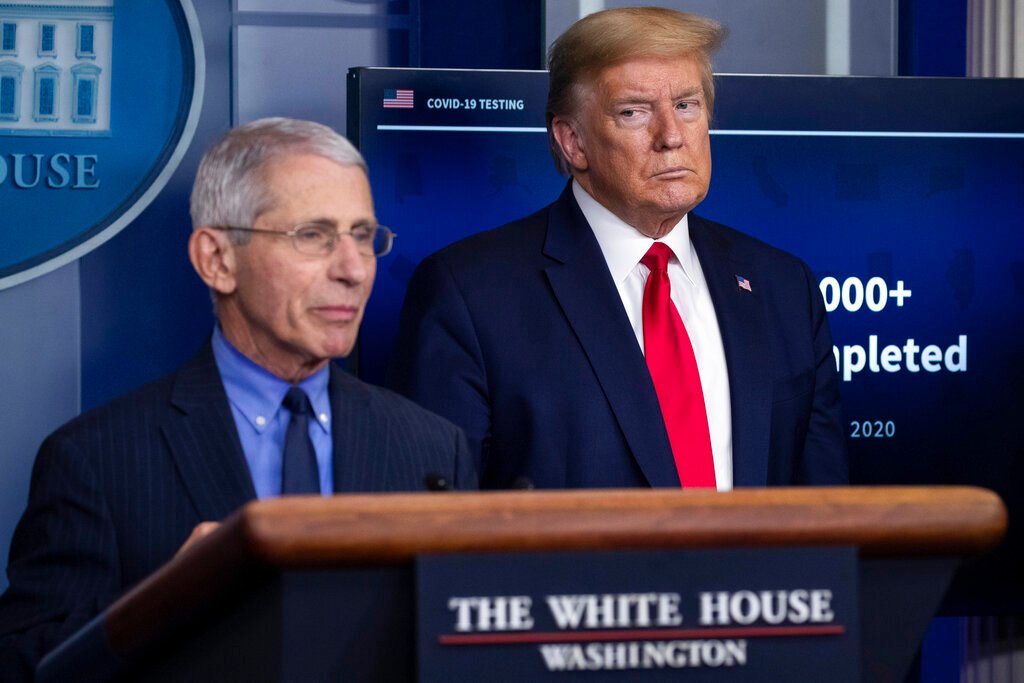 “I did the best I could,” President Donald Trump said.

Huddled with aides in the West Wing last week, his eyes fixed on Fox News, Trump wasn’t talking about how he had led the nation through the deadliest pandemic in a century. In a conversation overheard by an Associated Press reporter, Trump was describing how he’d just publicly rebuked one of his top scientists — Dr. Robert Redfield, a virologist and head of the U.S. Centers for Disease Control and Prevention.

Redfield had angered the president by asserting that a COVID-19 vaccine wouldn’t be widely available to the general public until summer or fall of 2021. So hours later, with no supporting evidence, Trump called a news conference to say Redfield was “confused.” A vaccine, Trump insisted, could be ready before November’s election.

Mission accomplished: Fox was headlining Trump’s latest foray in his administration’s ongoing war against its own scientists.

It is a war that continues unabated, even as the nation’s COVID-19 death toll has reached 200,000 — nearly half the number of Americans killed in World War II, a once unfathomable number that the nation’s top doctors just months ago said was avoidable.

Over the past six months, the Trump administration has prioritized politics over science at key moments, refusing to follow expert advice that might have contained the spread of the virus and COVID-19, the disease it causes. Trump and his people have routinely dismissed experts’ assessments of the gravity of the pandemic, and of the measures needed to bring it under control. They have tried to muzzle scientists who dispute the administration’s rosy spin.

While there is no indication that Trump’s desperation for a vaccine has affected the science or safety of the process, his insistence that one would be ready before the election is stoking mistrust in the very breakthrough he hopes will help his reelection.

Today, he is pushing hard for a resumption of normal activity and trying to project strength and control to bolster his political position in his campaign against Democrat Joe Biden.

In hindsight, Trump says, there’s nothing he would have done differently, citing his early move to restrict travel from China — a move that data and records show was ineffective. Still, he gives himself high marks on his handling the pandemic — except for bad messaging.

“On public relations I give myself a D,” he told Fox this week. “On the job itself we take an A-plus.”

In late January, after the virus had first emerged in Wuhan, China, the CDC launched its emergency operations center. What was needed, epidemiologists said, was an aggressive public education campaign and mobilization of contact tracing to identify and isolate the first cases before the disease spread out of control.

Instead, Trump publicly played down the virus in those crucial first weeks, even though he privately acknowledged the seriousness of the threat.

“I wanted to always play it down,” the president told journalist Bob Woodward in March. “I still like playing it down because I don’t want to create a panic.”

But the virus kept coursing through the country, and the world. And with a president bent on minimizing the dangers, the U.S. would become ever more polarized, with the simple acts of wearing masks and keeping a distance transformed into political wedge issues.

“You have to be calm,” Trump said on March 6, during a visit to the Atlanta headquarters of the CDC. “It’ll go away.”

By mid-March, hospitals in New York and elsewhere were deluged with patients and storing bodies in refrigerated morgue trucks.

And that was just the beginning.