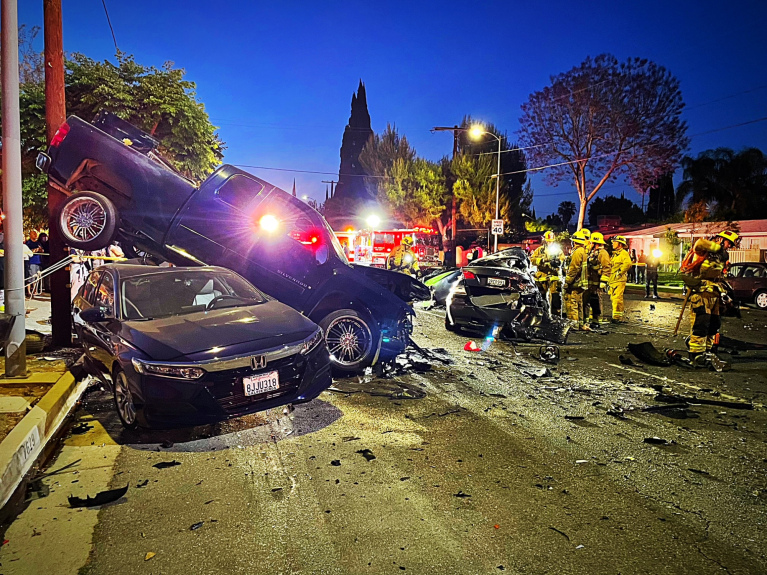 Authorities identified a man Tuesday who was killed when the BMW he was driving was involved in a multi-vehicle collision in Reseda, and the investigation was continuing to determine if he was racing with another motorist at the time of the crash.

The crash occurred about 8:05 p.m. Sunday at Corbin Avenue and Saticoy Street, according to the Los Angeles Police Department.

Kelley Reid Spencer, 28, of Woodland Hills died at the scene, according to the Los Angeles County coroner’s office and the LAPD.

According to the LAPD, Spencer — driving a black BMW M3 — was northbound on Corbin Avenue, as was a black 2015 Mini Cooper convertible that was being driven by a male juvenile whose name was not released.

Both cars “were traveling at a high rate of speed,” an LAPD statement said.

“The Mini Cooper collided into a black 2013 Kia Optima that had negotiated a right turn from westbound Saticoy Street to northbound Corbin Avenue,” police said.

“The black Kia was pushed into opposing lanes of traffic as a result of the collision with the Mini Cooper,” police said. “The Kia then collided with a gray 2016 Volkswagen Golf sedan that was traveling southbound Corbin Avenue.”

Meanwhile, Spencer “lost control of his vehicle, swerved, crossed into opposing lanes of traffic, and collided with a blue 2008 Chevy Silverado that was traveling southbound Corbin Avenue,” police said.

“The force of the collision between the BMW and the Chevy caused the Chevy to collide with parked vehicles and the BMW disintegrated killing the driver,” police said.

A witness told Fox11 that two racing vehicles had caused the wreckage, and a community resident told KTLA5 that street racing was a problem in the neighborhood.

The investigation is ongoing, police said.

“Drivers are reminded that they must obey the rules of the road and drive at a safe speed,” police said. “Speed kills. Reckless driving and street racing will not be tolerated in the city of Los Angeles.”