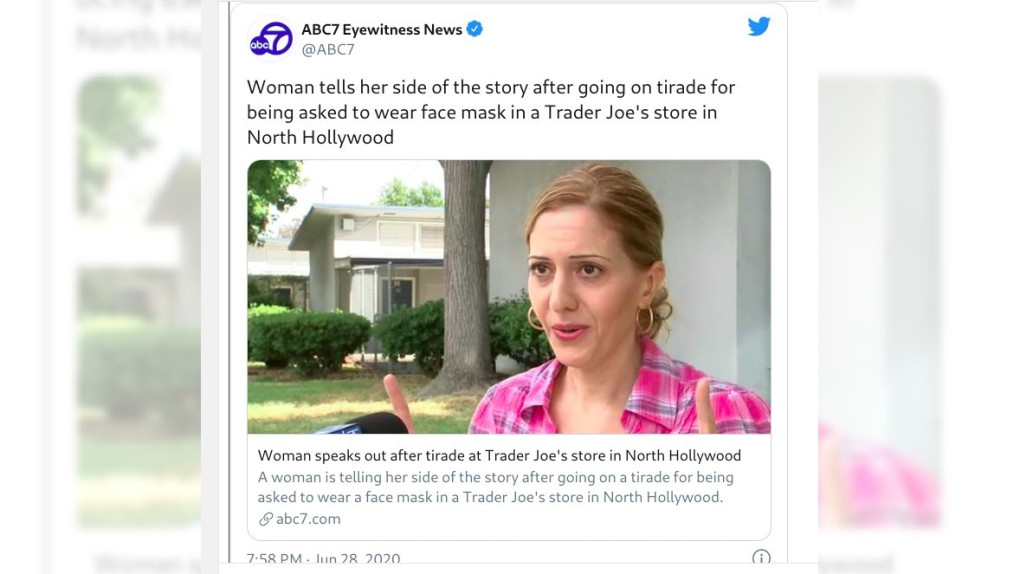 The woman seen yelling at workers and customers during opening day at NoHo West’s new Trader Joe’s on Friday has been speaking to Los Angeles TV news reporters in an effort to defend her actions and explain what the world saw on cell-phone videos that have been circulated all over the world.

The videos show her throwing down her shopping basket and yelling at Trader Joe’s workers who told her to wear a face mask in order to prevent the spread of coronavirus.

The woman — who didn’t allow LA’s TV stations to use her name — called those around her “Democratic pigs,” and claimed she had a medical problem that exempted her from wearing a face mask.

“So anyone harassing me to wear a mask, you guys are violating federal law,” she says on the cell-phone video. “My doctor would not let me wear a mask.”

Since the videos went public, the woman has spoken on camera with reporters from ABC7, CBS2/KCAL9 and Fox11.

She has been vague about her medical condition.

“I do have a breathing problem, basically, with my nose,” she told CBS2/KCAL9.

While in the store, she said a man started yelling at her over her lack of a mask. She told CBS2 she felt threatened.

“Nobody was helping me, so at that point, that is what they show in the video.”

“They made it look like I am this crazy person, and yes I did throw my basket to the ground and not anybody,” she told Fox11.

“All we’ve seen the last few months is division and hatred,” she told a reporter. “I am a human being. I reacted based on feeling helpless in this situation.”

How does she feel about what happened in the Trader Joe’s?

Police were called, but no charges were filed, said CBS2.

Despite her wish to remain anonymous, the women’s name was being posted Monday on social media sites.

Others shopping at the store without masks since the incident have been asked to leave, CBS2 reported.