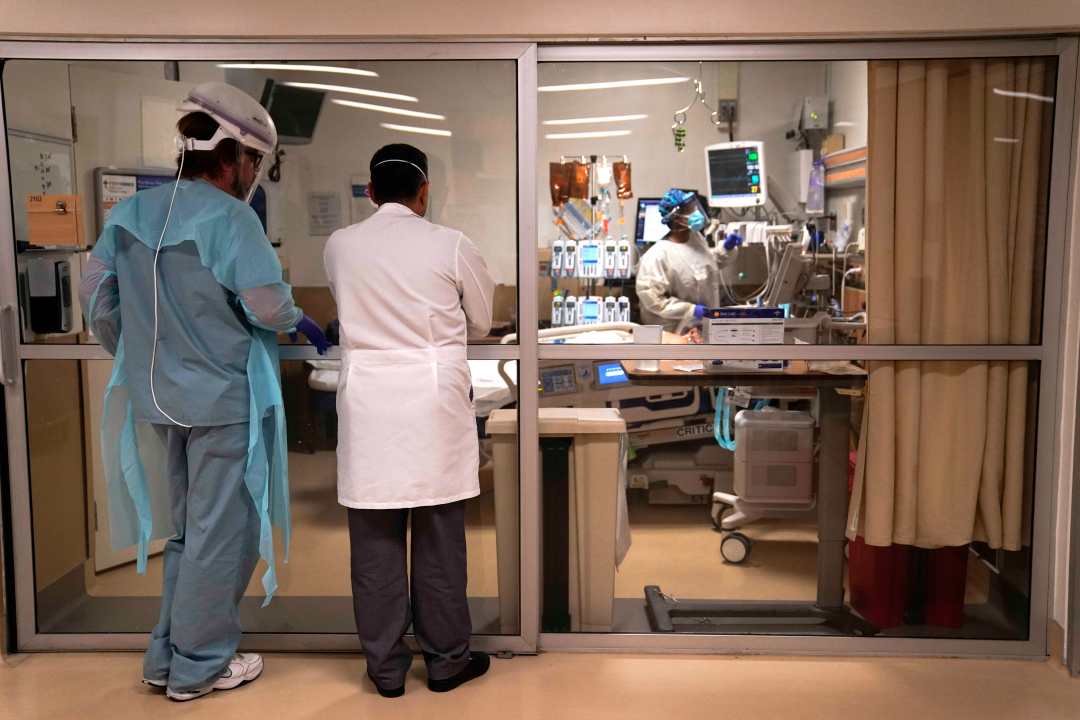 Two day’s worth of statistics added up to daunting numbers from the Los Angeles County Department of Public Health on Saturday, Dec. 26, as 29,464 new coronavirus cases were posted. Already packed hospitals around the county reported more COVID-19 patients, putting further pressure on dwindling intensive-care units amid the worsening outbreak.

The caseload totals reflected 13,185 cases reported Saturday and 15,538 cases from Friday, Dec. 25; as well as 741 new cases from Long Beach. Officials did not update the county’s pandemic totals on Christmas Day because its offices were “experiencing a service interruption caused by an outage with Spectrum Service in the Los Angeles area.”

The reported fatalities were down a tick from the past few days, when officials reported a record 148 new COVID-19 deaths on Thursday, which topped the earlier record of 145 set Wednesday. The county reported 131 deaths from Friday, and only five on Saturday, acknowledging, however, that the new numbers were an undercount due to the reporting lag caused by the Spectrum outage and the Christmas holiday.

The two-day total of 142 deaths included six fatalities reported earlier by the city of Long Beach, which, along with Pasadena, maintains its own health department. Long Beach did not post updated totals on Saturday; as of Thursday, the city had posted 29,197 cases and 349 deaths. Pasadena added 149 new cases to its total Saturday, which included Christmas and Christmas Eve numbers, for a total of 6,170; its death toll of 151 did not increase.

Countywide, hospitalizations rose to 6,770, up from 6,499 on Christmas Eve, with 20% of patients in intensive-care units. Health officials have been on edge for weeks, anticipating that Christmas gatherings would strengthen the as-yet uncontrolled surge. The impact won’t truly be felt for weeks; experts believe the current upswing in cases was largely fueled by Thanksgiving gatherings.

“We extend our deepest sympathies to the many families who are spending the holiday weekend grieving the loss of a loved one due to COVID-19, we wish you healing and peace,” said Director of Public Health Barbara Ferrer. “People mixing with others not in their household has driven the COVID-19 pandemic in L.A. County to the most dangerous levels that we have ever seen. The overwhelmed hospitals are the saddest proof of this reality. To honor our health care workers and for the safety of your family and friends, please delay travel plans and gather only with members of our household. These actions will save lives.”

The growing number of hospital patients, particularly in ICU beds and emergency rooms, has hospitals across the region struggling to find room for patients and trained staff to care for them. County Health Services Director Dr. Christina Ghaly said last week that some ambulance crews have been waiting hours outside emergency rooms to offload patients due to lack of space.

Despite some ICU beds remaining available in L.A. County, the state considers the Southern California region’s adult ICU bed capacity to be 0%; adult ICU bed capacity is the metric used for the new regional stay-at-home order, with 11 counties comprising Southern California, including L.A., Orange, Riverside and San Bernardino. When the index fell below 15%, it triggered the current more-restrictive order, which includes such rule as a ban on indoor dining and tight limits on retail shopping.

It’s almost certain the order will be extended, state officials said last week; there is scant hope that the area will climb above 15% availability by Monday, the scheduled end to Gov. Gavin Newsom’s current decree.

According to Ghaly, 96% of the county’s 70 emergency-room-equipped hospitals diverted ambulance traffic to other medical facilities at some point during the day on Tuesday due to overcrowding — up from the normal average of 33% for this time of year.

Ghaly said about 750 new COVID patients are being admitted to hospitals every day. As of Thursday morning, the county’s 70 “911-receiving” hospitals had 723 total available beds, and just 63 ICU beds — 42 of them adult beds and 21 pediatric.

“Most hospitals are reporting officially no available ICU beds, already having surpassed the licensed ICU capacity and the capabilities of their available staff,” Ghaly said.

The county has an overall licensed ICU capacity of about 2,500 beds. According to the county DHS, hospitals surged their capacity to operate a daily average of 2,660 ICU beds last week. On average, those beds were occupied by 996 confirmed or suspected COVID-19 cases on a daily basis, or about 37% of the 2,660 staffed beds. The hospitals last week averaged 55 open and staffed ICU beds on a daily basis.

Those 70 hospitals operated a daily average of about 10,000 non-ICU beds last week, with 36% of them on any given day occupied by confirmed or suspected COVID-19 patients, and only about 300 beds staffed and available each day.

The average number of hospitalized COVID patients in the county has increased by 547% since Nov. 9. Average daily deaths are up 467%, from about 12 per day in early November to 69 per day last week. Average daily new cases have soared by 907%.

County public health officials started testing patients for a new, more contagious strain of the coronavirus that’s being reported in the United Kingdom — that appears to be more transmissible than other strains.

In a memo issued last week, public health officials asked that laboratories help with “surveillance to detect the variant strain and to report any occurrence” of it to them.

This strain is believed to be potentially more transmissible than others that have been circulating, but there is no evidence that it results in more severe illness or greater risk of death, according to the Centers for Disease Control and Prevention.

Ferrer said a local laboratory is doing gene sequencing to test virus samples collected in L.A. County, but it will take about a week to finish the process.

The new variant was first reported in Great Britain, which has instituted tougher lockdown rules over the past week, but has also been reported in France. It is said to be far more contagious than the original strain of the virus, but has not been found to be more deadly.

Local officials are concerned that if the new strain is already present in Southern California, it could be behind some of the explosive growth in COVID-19 cases seen since the Thanksgiving holiday period.

It is unclear at this point whether the variant would reduce the effectiveness of the two COVID-19 vaccines that have begun circulating, but that is one of the things health officials are studying.