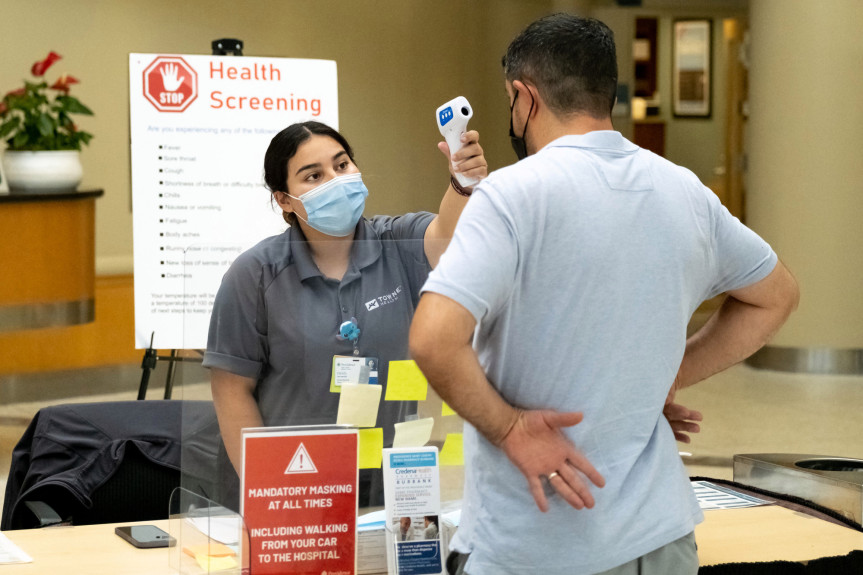 Los Angeles County heads into the weekend on a sad, alarmingly familiar note: Like clockwork, two weeks after a holiday, its coronavirus numbers are spiking and safeguards are being rushed into place to combat the spread. The countdown set off an array of emotions on Friday, July 16, with officials and medical experts expressing frustration, squabbling over enforcement but urging diligence from the community.

A  renewed mask mandate was set to go into effect at 11:59 p.m.  A revised public health order was formally published Friday, July 16, requiring face masks to be “worn by all persons, regardless of vaccination status, while in all indoor public settings and businesses.”

The renewed urgency was punctuated on Friday, as the county reported 1,902 new cases, for a total of 1,264,450 since the pandemic began, fueled by a test-positivity rate that has jumped from 0.4% in early June to 3.8% on Friday. The mark is the highest daily total since mid-March.

There were six more fatalities reported, too, raising the county death toll to 24,568.

The state dashboard posted 462 hospitalizations in the county, up by 10 from Thursday, with 103 patients in intensive care. Thursday’s 452 was a doubling of hospitalizations from just one month ago, officials said.

“We have all seen COVID-19 spread very fast in just a small amount time,” said L.A. County Health Officer Muntu Davis, in announcing the new numbers. “The alarming increases in cases, positivity rates and the increase in hospitalizations signals immediate action must be taken to slow the spread of COVID-19. Otherwise, we may quickly see more devastating illness and death among the millions of residents.”

Amid all the consternation and concern: 4 million county residents remained unvaccinated against COVID-19, propelling the newly spiraling infection rate.

For many, the reinstated mandate was a step back, their emotions fused with disgruntlement over mandates they feel were arbitrary, have curtailed civil liberties and depressed the economy. Others urged the community to honor the rules, protect themselves from the spread and, above all, get the shot.

“I wish that the Department of Public Health had provided masking guidance during the July 13th Board of Supervisors meeting so that the public could have had the opportunity to listen to the decision-making process,” said L.A. County Supervisor Kathryn Barger on Friday. “By deviating from the state, we create confusion and disagreement at the local level, which hinders public trust and takes away from our primary messaging which should be to encourage individuals to get vaccinated with urgency given the spread of the Delta variant.”

Barger’s irritation was echoed by Sheriff Alex Villanueva, whose department is tasked with enforcing the ordinance. Instead, it will only encourage it.

“Forcing the vaccinated and those who already contracted COVID-19 to wear masks indoors is not backed by science,” read a department statement Friday, adding that the department will “not expend our limited resources” on forcing compliance.

Meanwhile, many on the healthcare frontline called the rekindled rules an attempt to scurry back ahead of a relentless disease that still has the power to kill, and to wreak havoc on the region’s economic infrastructure.

“I don’t think we took a step back,” said Dr. Suman Radhakrishna, director of infectious disease at Dignity Health’s California Hospital. “We took a precautionary measure so we don’t have to take a step back.”

The real step back would be doing nothing, leading to more illness, and potentially more lockdowns, Radhakrishna and others said.

Neither the region nor the nation have the luxury of time to wait out the arrival of the “herd-immunity” that has been slowed by hesitancy to get immunized, she said.

Dr. William Wang, chief medical officer at Glendale Memorial Hospital, supported the county’s action. And he wasn’t surprised about the need for it.

“What we learned from COVID-19 — in its three waves — is that you open society back up, you have a holiday and approximately two to two and half weeks later you see a spike on the number of cases,” said Wang, who had the height of pandemic was seeing an average of 140 patients at the hospital.

If the county did nothing, in two weeks, residents could be looking at more exponential increases and would almost certainly face more drastic health orders, Wang said. Now is the time to instituted a mask mandate in an effort to stabilize rates, he added.

According to the county, masks will be required:

The order also recommends higher levels of protection — such as double-masking — where there’s close contact with others who are not vaccinated.

And it requires individuals, businesses, venue operators or hosts of public indoor events to require all patrons — vaccinated or not — to wear masks, and they must clearly post signage requiring masts at all entry points to a setting.

There are some exceptions — such as employees at certain workplaces who cannot wear a mask while performing specific tasks.

At mega events such as music or food festivals, parades and concerts, everybody must wear a mask in areas where 50% of of the structure has adjacent impermeable walls.

The goal? While experts have noted that a rerun of the torrent of death and severe illness reported in January is unlikely, they believe visible steps must be taken to get the public’s attention. Experts say wearing a mask protects others by lowering the number of respiratory droplets and particles released into the air by breathing and talking.

On Thursday, after enjoying weeks of relative good statistical news, county public health officials said transmission of the virus had gone from “moderate” to “substantial” in the weeks since June 15, when the state — and the county — reopened.

At the core of the rise is a pesky and more infectious mutation of COVID-19 — the Delta variant, which is thriving among those who have not been vaccinated and hindering the march toward a now increasingly elusive form of herd immunity. From June 27 to July 3, 71% of all samples processed were the mutation, officials said.

The federal government agrees with L.A. County’s response, it appears.

The director of the Centers for Disease Control and Prevention said on Friday that the COVID-19 outbreak in the U.S. is becoming “a pandemic of the unvaccinated.”

He said the Biden administration expects cases to increase in the weeks ahead because of spread in communities with low vaccination rates. Four states accounted for 40% of new cases last week, with one in five coming from Florida.

But Zients said there are signs that increased cases are driving more people in those communities to seek vaccination at rates faster than the national average.

Wang’s hospital held a vaccination clinic three weeks ago hoping for 50 people to show up for a first dose. Only 20 did. And only 12 are set for the follow up this Monday.

On Friday, questions emerged over how the Public Health Department would enforce the renewed mandate.

Both the county Sheriff’s Department and the LAPD said they would encourage voluntary compliance, wherever issues appear.

“Our main focus is to educate and encourage people to wear masks,” said LAPD Officer Tony Im, a department spokesman.

L.A. County Supervisor Hilda Solis said she hoped “encouragement” would be enough — for the moment, as well as the nudging of community influencers who have built of trust among those who might be hesitant about getting jabbed.

“I am hopeful that this mask requirement will encourage our vaccinated residents to connect with their family and loved ones who still may be on the fence to get vaccinated now,” she said in a statement.

In the region’s higher-risk communities, research was announced Friday showing just how urgent the need for vaccinations are.

A new USC study of Medicaid enrollees, published in the American Journal of Preventative Medicine, found that Latinx patients had “starkly higher odds of a positive COVID-19 test, as well as higher odds of hospitalization and death, than White patients.”

“Even among a population of Medicaid patients who are similarly economically disadvantaged, Latinos are shouldering an unfair burden of this deadly pandemic,” said study co-author Mireille Jacobson, associate professor at the USC Leonard Davis School of Gerontology and senior fellow at the USC Schaeffer School for Health Policy and Economics. “The substantially higher risk facing Latinos should be a key consideration in California’s strategies to mitigate COVID-19 transmission and harm.”

Meanwhile, Vic Chouchanian, co-owner of San Fernando Brewing Company, was concerned about the potential  of renewed enforcement, and the general malaise of having to wear masks in a social environment where people just want to have a drink.

“It’s going to hurt us I think, just on an emotional level,” said Chouchanian, who remembers the days in the height of the pandemic when inspectors would visit. “I’ll follow the rules, but I’m disappointed.”

Things won’t change much at the business, as it’s only a mask mandate and it’s not required to enforce social distancing. People take off their masks when eating and drinking anyway, he said.

But “I understand due to the recent spike in COVID cases, that this is necessary.”

“We have to play by the rules.”

“We saw the cases going up and wanted an extra level of protection for our staff and guests,” said Simms, who owns five restaurants in Manhattan Beach. “This announcement (from the county) was proof we’d already done the right thing.”