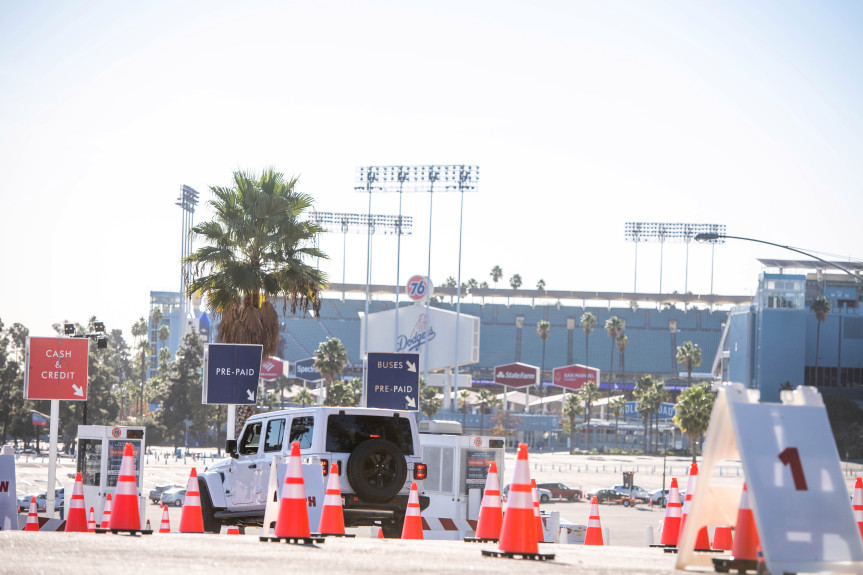 Dodger Stadium transformed into a massive vaccination center on Friday, Jan. 15, amid concerns that shortfalls in anticipated supplies are slowing the rollout of the vaccine.

Lines of cars showed up early Friday morning along the Academy Road entrance, where members of CORE and L.A. City Fire Department  personnel directed eager healthcare workers — from pharmacists to nurses — into the stadium, where they would wait in another long line to be inoculated.

Among them was Kanwar Ali, a pharmacist, who said the moment could not come too soon.

“I just wanted to be here so I can tell my patients I already took my shot,” he said, adding he’s been seeking a vaccine hub for at least week.

That week has been a scramble for many as county public health officials work to accelerate distribution. While state officials have allowed anyone over 65 to get the vaccine — a policy implemented almost immediately in neighboring Orange County — L.A. County official say they still do not have sufficient vaccine to inoculate the top-tier recipients, healthcare industry workers.

L.A. Mayor Eric Garcetti and health officials have lamented the shorfall — especially after months of the opportunity to plan for potential shortages. The mayor and other big-city mayor across the country sent a letter to President-elect Joe Biden Wednesday asking that cities be given vaccine allocations directly instead of funneling them through the state.

With limited doses, distribution has been broken up into phases, which are then broken into tiers.

Phase 1A  is for healthcare workers and  workers and residents of skilled nursing facilities. Next in line are people under Phase 1B, which includes people 65 and older, teacher and food and agricultural workers.

Friday’s opening at the stadium considered a “soft” opening, limited by the vaccine supply.

Officials were expecting about 2,000 people, he said. But that number will grow in the coming days as the facility, possibly the largest of its kind in the country. Ortiz said officials expect it to be at full capacity, delivering 12,000 doses a day, by the end of next week.

The site — staffed by a mix of volunteers, clinicians, city fire personnel and traffic control — is set up to give an initial dose and then later a second round, per the vaccination’s protocol.

Ortiz said once the facility — which until now was a COVID-19 testing hub — moves through the the county’s population of healthcare workers, inoculations will then be distributed to the elderly.

County health officials aim to complete 500,000 additional vaccinations among healthcare workers by the end of January across the region.

There was a sense of urgency mixed with relief among many who showed up on Friday.

Mike Tamassian, a psychologist, said “I’m getting vaccinated just to be able to see my clients.”

Others — at least two were turned away — criticized the rollout.

“It’s too slow,” said an irate Margie Harris-Hightower, 82, who came Friday morning with the understanding that it would be given to seniors. “Average people like me can’t get it. They need to open it up to everybody.”

The Dodger stadium rollout was by online reservation, a system that will be expanded as more people are eligible for vaccines. But many seniors aren’t online, and their non-tech-savvy peers are dealing with glitchy websites and overwhelmed phone lines to make appointments.

Concerns are particularly acute among people of color and those who are poor.

Nearly 9.5 million seniors, or 16.5% of U.S. adults 65 and older, lack internet access, according to U.S. Census Bureau data. Access is worse for seniors of color: more than 25% of Black people, about 21% of Hispanic people and over 28% of Native Americans 65 and older have no way to get online. That’s compared with 15.5% of white seniors.

Under President-elect Joe Biden’s plan, announced Thursday, about $20 billion would be allocated for a more disciplined focus on vaccination, on top of some $8 billion already approved by Congress. Biden has called for setting up mass vaccination centers and sending mobile units to hard-to-reach areas.

With the backing of Congress and the expertise of private and government scientists, the Trump administration delivered two vaccines and more are on the way. Yet a month after the first shots were given, the nation’s vaccination campaign was off to a slow start. About 11 million people got the first of two shots, although more than 30 million doses have been delivered.

Getting 100 million shots in Americans’ arms in his first 100 days is only the beginning of his coronavirus plan, Biden declared Friday. Lasting impact, he said, will emerge from uniting the nation in a new effort grounded in science and fueled by billions in federal money for vaccination, testing and outbreak sleuths.

Biden pledged to maximize the available supply of vaccines and materials needed to administer them, using a Cold War-era law called the Defense Production Act to direct private manufacturing.

He also seconded the Trump’s administration’s call earlier this week for states to start vaccinating more seniors, reaching those 65 and older as well as younger people with certain health problems. Until now, states have been focused on inoculating health care workers, and some are starting to vaccinate people 75 and older. Relatively few are providing shots to people between 65 and 75

“You have my word, we will manage the hell out of this operation,” he said. “We are in a war with this virus,” he said.

As the Dodger Stadium center opened, L.A. County announced it is expanding its capacity for large-scale COVID-19 vaccine distributions by opening five large-scale vaccination sites across the county on Tuesday.

The vaccinations are administered free of charge, but they begin with priority eligibility given to healthcare workers and skilled nursing facility staff and residents first.

“By vaccinating those at the highest risk as soon as possible, we have an opportunity to stabilize our healthcare system, prevent people from being hospitalized from COVID-19, and most importantly, save lives,” said L.A. County Public Health Director Barbara Ferrer.

For information, visit the county’s vaccination site at http://www.publichealth.lacounty.gov/media/Coronavirus/vaccine/index.htm?utm_content=&utm_medium=email&utm_name=&utm_source=govdelivery&utm_term=.