With ‘full recovery’ from pandemic at stake, LA County re-lives a familiar reality 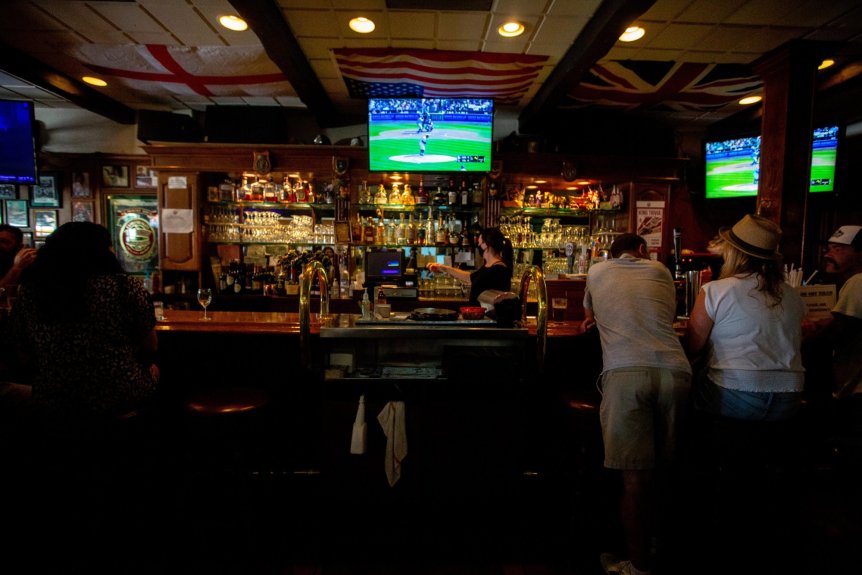 Los Angeles County’s rekindled mask mandate blanketed the region on Sunday, July 18 amid rising concern about increased infection among unvaccinated people and that the region’s “full recovery” from the pandemic is on the line.

Malls, cafes, pubs and scores of other places where people gather indoors were met with a singular message at the door: Wear a mask inside, regardless of whether you’re vaccinated or not.

On a sweltering Sunday, it was a message many were not particularly happy to echo, hear or align with. After a year and half of coronavirus statistics, shutdown orders and physical distancing — and after the region was just beginning to see the economic and social fruits of restrictions lifted on June 15 — it was “here we go again” for L.A. County.

But life went on, and so did the masks.

It took a nudge and brief reminders here or there from Lorraine Williams, owner of Robin Hood British Pub in Sherman Oaks, a staple Burbank Boulevard destination in the area, where a robust and lively few dozen had gathered inside as a Dodgers game flashed on the bar’s TVs.

“Have you got your mask?” she asked a customer, who’d just walked in and as activity started to bustle in the early afternoon.

The new requirement, which launched Saturday night at 11:59 p.m., calls for everyone — with few exceptions and regardless of whether you’d gotten your  shot — must wear a mask indoors when in public spaces.

The order also recommends higher levels of protection — such as double-masking — where there’s close contact with others who are not vaccinated. And it requires individuals, businesses, venue operators or hosts of public indoor events to require all patrons — vaccinated or not — to wear masks, and they must clearly post signage requiring masts at all entry points to a setting.

There are some exceptions — such as employees at certain workplaces who cannot wear a mask while performing specific tasks. Exceptions also include children under the age of two and people with certain medical conditions or disabilities that prevent masking.

The new public health order kicks in at a tenuous time.

The county reported 1,635 more cases of COVID-19 on Sunday, topping 1,000 for the tenth day in a row, a major disappointment after weeks of declining cases and death. There were four new deaths posted, though that number was probably low because of reporting lags. And the number of hospitalizations was also ticking upward, to 528, 21 more than Saturday, according to the state’s dashboard.

While case rates are still lower than during much of the pandemic, especially during the massive surges last seen in January, public health experts and physicians worry that the region is seeing a repeat of previous patterns of surges, which have led to more hospitalizations, and ultimately more death.

On a positive note, 69% of L.A. County residents ages 16 and up have been vaccinated with at least one dose as of Friday, July 16. But that leaves 3 to 4 million people in the county still not fully vaccinated — a number that could still lead to significant surging in weeks to come.

And that’s what the more infectious Delta variant likes — a host body to live in that is not protected by a vaccine or by natural immunity.

Indeed, on July 4, the region’s test positivity rates were near 1.5%. Now they are near 4. And while still relatively low compared to peak post-holiday surges, the number of average daily deaths appears to have bottomed out in late June and ticked up again since the beginning of July.

As if Williams needed a reminder of just how devastating the virus could be.

It was in January, when her husband — co-owner of the pub, Michael Williams, started not feeling right, even complaining of something not physically right on the golf course. With golf a passion for the 73-year-old London native, she knew something was wrong. They both would test positive for the virus. On the eve of getting an antibody treatment, she remembered putting her arms around him, and saying “We’ll have our antibodies … at last,” she said. And he agreed, with relief. They talked a few minutes, and a few minutes later, he was gone. Despite efforts to revive him, the virus took him.

“I feel so strongly now that people can save themselves by wearing a mask,” she said, as a giant picture of Williams stood in the pub’s dining room. Just three weeks ago, about 200 packed at the pub to remember him.

Officials and doctors say a goal of the renewed mask mandate is to avoid a situation where people’s lives are again on the line, stuck on a ventilator in some ICU. Many of the most recent patients are younger than 50, a point in their favor if infected. But that point is also countered if a person has underlying conditions that could make them more vulnerable to the disease.

Vaccinated people appear to be generally safe, though experts say that the vaccine’s efficacy may wear off over time, so  boosters may be needed. And there have been some cases in which the disease breached a person’s immunity. But the vaccines largely protects against the coronavirus and, even if you do get it, the chance you will develop serious symptoms is extremely rare.

Still, officials spent the weekend urging residents to at least put on the low-tech, low-maintenance mask to stave off a resurgent disease that could jeopardize a full economic and human recovery from the pandemic.

“This was done in recognition that the vaccines, while extraordinarily effective, are not perfect and that we continue to have an obligation to reduce risk as much as possible,” L.A. County Public Health Director Barbara Ferrer said of the virus. “Please help us get back to slowing the spread by wearing your mask indoors. And for those eligible and not yet vaccinated, please consider getting vaccinated as soon as possible as our full recovery is in jeopardy until more people are vaccinated.”

Over at M Street Cafe in Sherman Oaks, not far from Williams’ pub, a red “mask-up sign” at the door got customers’ attention.

“It’s too early to tell” whether the mandate would put a dent in her business, she said.

But there was definitely a sense of “we’re all in this together,” she said, among her customers. “Everyone’s been really supportive.”

Among the supporters was Ben Hauser, who sat at a table outside. He had no qualms with the mandate, and said he’d continued to support the cafe, especially as it weathers the economic toll wrought by the pandemic.

“It’s more frustrating that we as a society can’t seem to play ball together to overcome this problem,” he said.