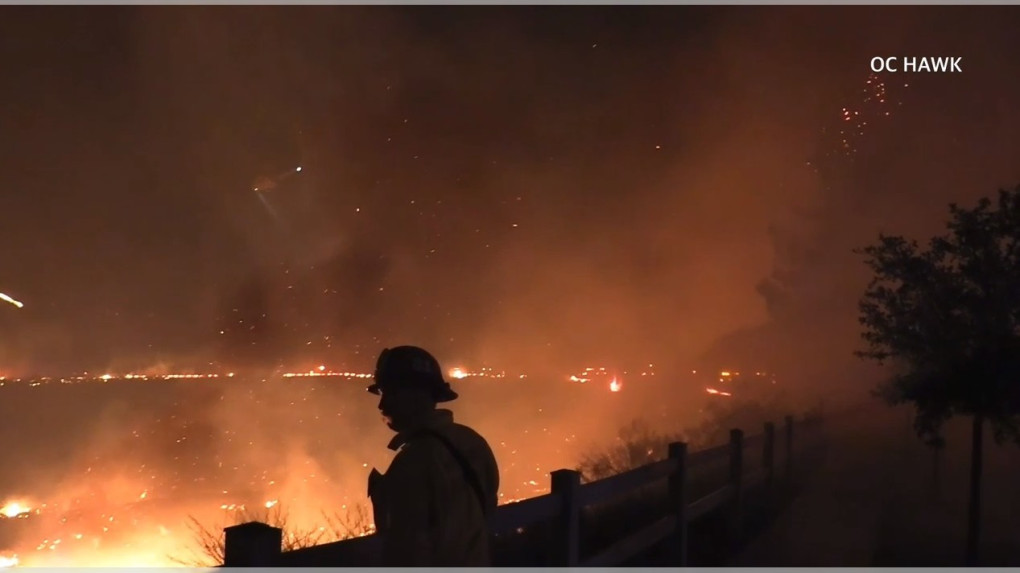 A wind-driven brush fire scorched foothills Thursday near the 23 Freeway in Thousand Oaks, threatening some homes.

The Erbes fire was spotted near Erbes Road and Sunset Hills Boulevard, Ventura County Fire Department officials said on social media at 5:23 p.m. Winds blowing to the southwest helped it grow from 30 to 250 acres in less than 90 minutes.

The fire crossed over Erbes Road at about 6 p.m., bringing flames dangerously close to homes and other structures. Ventura County sheriff’s deputies were dispatched to the area to assist voluntary evacuations.

Houses could be seen in the distance as flames chewed through low brush and light vegetation in footage recorded at the scene of the fire. Wind could be heard whipping through the hillside as ground crews directed streams of water at the blaze and bulldozers created barriers between the fire and nearby structures.

There were no reports of structure damage or injuries as of 7 p.m. Firefighters managed to surround most of the fire’s perimeter and were gaining the upper hand on the situation. Authorities expected evacuation warnings to be lifted before the end of the night, VCFD officials said.

“I kind of just hurried over here, and it was really windy, yea, a lot windier.” nearby resident Britten Higham, said. “It was really scary, but I’m thankful for everybody that they had this many firefighters.”

The cause of the fire was not immediately clear.