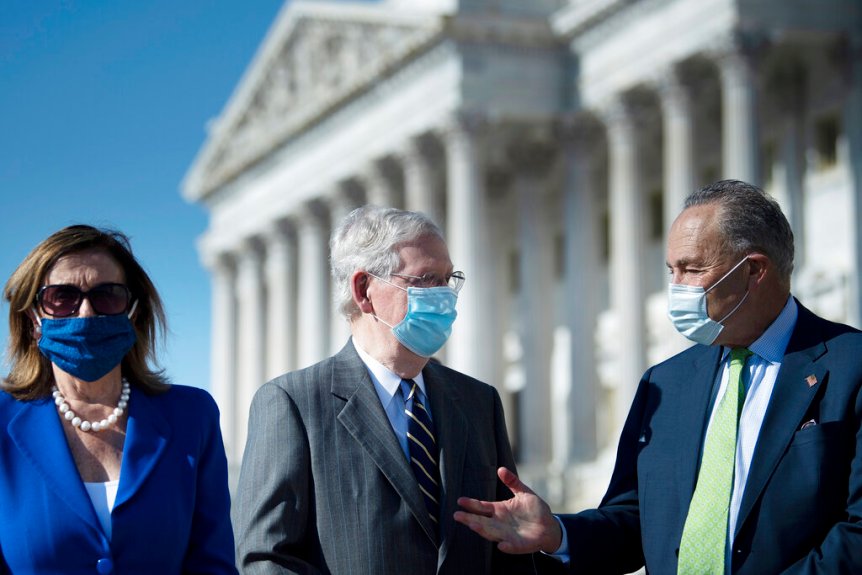 With a self-imposed deadline on Congress looming this week to agree on a new federal stimulus bill, it was unclear Thursday just how close lawmakers might be from closing the oceans of difference between their opposing proposals.

Negotiations were continuing into the night as local leaders followed the developments closely. There is much at stake in Los Angeles County where hundreds of thousands of people remain jobless and businesses have been hit hard by an economic slowdown.

The initial CARES Act passed in March delivered $1.22 billion to L.A. County, which paid for $656 million in public health measures; $200 million in rent relief, food and childcare; $160 million in grants to support small businesses; and $150 million to support the county’s essential workers. Anxious high-profile CARES Act beneficiaries awaiting word on the future include LAX, the LA Unified School District, the Port of LA and scores of others.

Thousands of businesses across Southern California that benefited from the Paycheck Protection Program will likely need another round to stay afloat. In Pasadena alone, 4,000 business and nonprofits received forgivable loans from the federal government to retain workers on the payroll. Among them were prominent organizations such as Tournament of Roses, Wetzel’s Pretzels, Pasadena Humane Society and All Saints Church.

In Long Beach, the CARES Act poured $360 million in forgivable loans into businesses saving more than 41,000 jobs. The Aquarium of the Pacific collected roughly $3.5 million helping to preserve about 60% of its employees, which stood at 202 people. For restaurants, such as Berlin Bistro, a $100,000 infusion has meant staying in business rather than shutting down.

On the table as part of a new stimulus bill that lawmakers in Congress have been debating for weeks are unemployment benefits, an extension of the Paycheck Protection Program and whether to continue an eviction moratorium set to expire soon, among other details.

The impacts would be big in L.A. County where roughly 350,000 people received jobless benefits in June, amounting to $1.1 billion in assistance, down slightly from May, according to the California Employment Development Department.

For county government itself, the pandemic has spelled trouble. Chief Executive Officer Sachi Hamai last week said economic slowdowns could force 650 layoffs beginning in October on top of 3,000 people who have already been terminated. Hamai said the county needed roughly $1 billion to plug losses due to the coronavirus in addition to the $1.22 billion from the CARES Act.

“We urgently need federal stimulus funding to enable us to backfill these lost revenues and preserve jobs and programs that are so vital to serving the public,” Hamai said Thursday in a statement.

So what exactly do L.A. County residents stand to lose or gain if Congress does not reach a deal? For one thing, enhanced unemployment benefits.

On top of regular unemployment checks, Republicans in their version of the next stimulus bill called the HEALS Act have agreed to extra benefits of $400 per month, while Democrats in their bill bill called the HEROES Act insist on keeping the payments at $600.

Republicans originally proposed $200 in bonus unemployment checks, saying the current $600 that went into effect since the pandemic were discouraging many people from working. The Republican version also calls for a $450 per week check for unemployed workers who secure a new job or get rehired.

In terms of housing, the Democrats’ bill would extend the eviction moratorium for another year while providing $200 billion for housing programs and $100 billion for rental assistance. The Republican bill, meanwhile, doesn’t address the moratorium. A ban on evictions is currently in place until Aug. 24 on properties backed by federal mortgage programs.

Most renters were also protected by city and county eviction moratoriums being extended. However, nearly 1,000 evictions filed before the pandemic occurred will reportedly be resuming soon. An untold number more could face homelessness once restrictions are lifted.

Republicans were also putting forward an additional $200 billion in state and local funds with Democrats saying it should be closer to $1 trillion. Overall, the Democrats’ proposal calls for $3 trillion in spending, while the Republican version lays out $1 trillion.

Both plans call for another stimulus check of $1,200.

No matter what passes in Congress, it will likely take weeks if not months for checks to arrive in the pockets of workers. Take, for instance, the first round of CARES Act funding authorized in March that was allocated on July 21.

Despite the influx of cash, local leaders continue to say the needs are still great.

L.A. Mayor Eric Garcetti frequently mentions the need for additional federal relief dollars in addressing the public with updates about the coronavirus pandemic. Garcetti, who has said he supports a universal basic income, said allowing bonus unemployment benefits to expire July 31 was unacceptable.

“Congress has to step up right now and pass something,” Garcetti said earlier this week. “They gave America a 30% pay cut, while they continue to earn the same amount of money, every senator that is working this week didn’t have their pay cut by 30%. But their inaction last Friday as we went off an unemployment benefit cliff, respectively gave a 30% reduction to Americans. That’s unacceptable, and they better not go on vacation before we pass that.”

On Thursday Garcetti joined 290 mayors from across the country in calling on Congress to act.