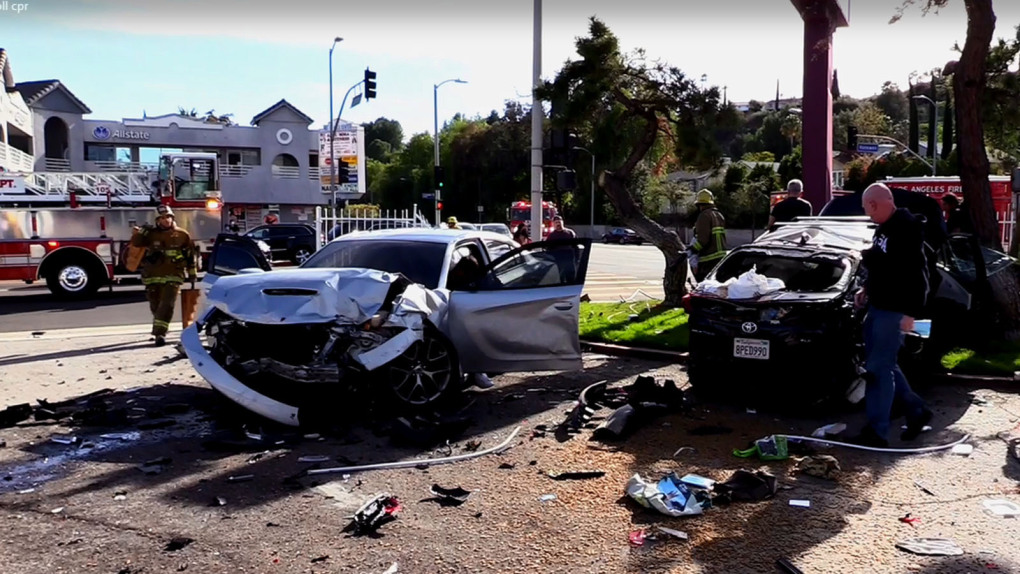 Dianna DeLuca just sat down in the main office at West Hills Urgent Care after picking up pizza for her staff on Friday when she heard what sounded like two cars racing.

The sound was familiar, she said, because it’s heard nearly every day near the office on the southeast corner of Valley Circle Boulevard and Vanowen Street.

“I had the view of the front door and I heard the noise, the two cars were racing, and then when I looked up, I saw the last vehicle go flying by going at least 80 miles-per-hour,” said DeLuca, who manages the urgent care.

The other car, what looked to be a Dodge Charger, slammed into a black Toyota Prius, whose driver appeared to be making a right turn from westbound Vanowen Street to northbound Valley Circle Boulevard, DeLuca said.

The crash, which occurred about 4 p.m. Friday, March 19, killed the driver of the Prius, identified by the coroner Saturday as 57-year-old Colleen Wong of West Hills.

DeLuca said paramedics had a hard time getting the woman out of the car using the jaws of life.

Wong was a mother of two who had a passion for spreading the word of God and worked for a faith-based nonprofit organization called Deoworks, which aimed to empower people to leadership, her son, Tim Wong, said Saturday, adding that his father had died of cancer a few years ago.

She would also teach a course called Perspectives, for people going into mission work, at various churches and work places, Tim, 23, said.

“My mom was always that person who I would go to with anything,” he said. “She would always be there answering any questions or giving advice, she was always just super loving, super energetic and outgoing.”

She liked to play the piano and had recently found joy in Saturday hikes and beach trips with her friends, Tim said.

She lived “about a minute away,” just north of where the accident happened, he said.

The Charger’s driver was hospitalized with critical injuries.

DeLuca has worked at her office for more than two years and has had fears that a crash involving street racing could send a vehicle into the building.

She said she hears cars racing through the area every day and night, adding it’s easy to lose track of speed on Valley Circle, a four-lane road with wide bike lanes and a posted 45 mile-per-hour speed limit sign. The intersection at Vanowen has traffic signals.

An officer used to sit in the area and watch for speeders until about a year ago, she said.

“Anyone that is around here that lives here, I’m sure they’re always complaining because there’s always accidents with parked cars at night,” she said.

The car the Charger was racing appeared to be a smaller silver car, DeLuca said.

The crash sent the Charger and the Prius through a rod-iron fence and into the parking lot of West Hills Montessori School, coming to rest within feet of a playground.

“I’m mortified to think if those kids were in the play yard. Oh my God,” she said.

DeLuca, who said she is at the office for at least a couple hours every day, said police asked about surveillance video but had not requested it as of Saturday afternoon. Her building has a camera that faces Valley Circle Boulevard that could help identify the other car involved.

“He’s going to get caught,” she said.

Any information gleaned about the driver of the Charger and what charges he might face were not immediately provided by police Saturday.