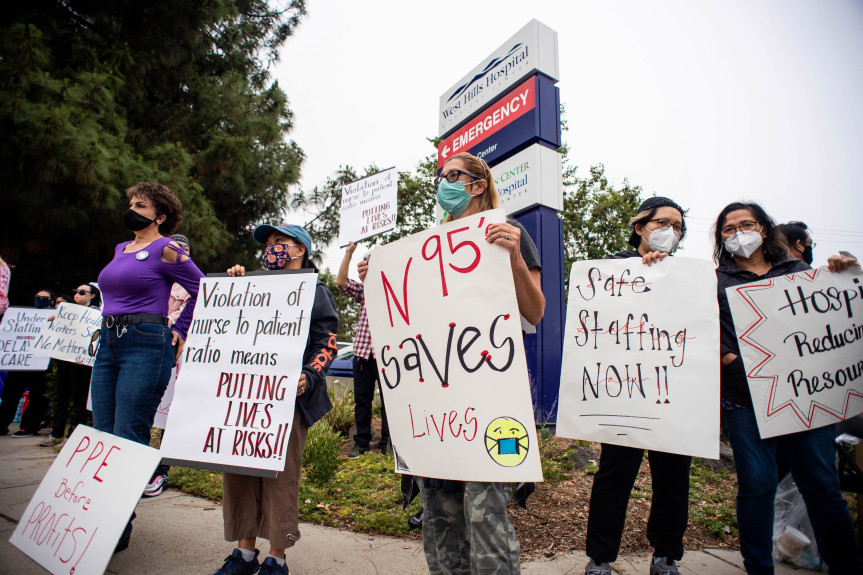 West Hills Hospital nurses who claim they’re understaffed and working with a “dangerous lack of personal protective equipment” during the COVID-19 crisis staged a protest Thursday in front of the hospital.

The employees, represented by SEIU 121RN, say the situation is endangering the lives of employees and patients. They also allege the Los Angeles hospital, owned by the Hospital Corporation of America, has attempted to silence nurses who brought the issues to light.

Nurses in the hospital’s COVID-19 units say they’re caring for more patients than they can safely handle. More RNs are desperately needed, they say, while many of their colleagues have been furloughed.

“We never had a problem with nurse/patient ratios until the COVID-19 pandemic hit,” said Yolanda Tominac, a critical care nurse at West Hills. “We’re supposed to be protected under the state’s Title 22 regulations, which means a nurse in the intensive care unit can’t have more than two patients at a time, but now it’s sometimes three.”

Nurses in the hospital’s telemetry unit say they are saddled with the same problem. They’re supposed to treat no more than four patients at a time but are frequently in charge of five, Tominac said.

Nurses are missing breaks and lunch periods as a result, Tominac said, while protective gear to guard against COVID-19 is in short supply.

A shortage of protective face gear

Protective gear, nurses contend, is being reused to the point of cracking.

Tominac said nurses are supposed to wear N95 masks with a hood called PAPR placed over the face and mask that has oxygen blown into it.

“They don’t have enough PAPRs to cover the amount of COVID-19 patients we have in the hospital, and some of them have been used so many times they’re cracked,” she said.

Many nurses only have access to a surgical mask, the union said, and those lucky enough to get an N95 mask — designed for a single trip into an infected patient’s room — are being told to use one for an entire week while treating multiple patients.

In a statement issued Thursday, the hospital said the pandemic has strained the worldwide supply of personal protective equipment, including masks, face shields and gowns, a challenge that is shared by many hospitals.

“West Hills Hospital is doing everything in our power to ensure safety, including securing additional PPE for current and future needs, enacting a universal masking policy, providing scrub laundering service and housing options for all colleagues caring for COVID-19 patients,” the hospital said.

Nurses at the hospital still fear they may be inadvertently spreading the coronavirus to uninfected patients.

When Jhonna Porter found out that the administration at West Hills planned to convert her fifth-floor nursing department into a COVID-19 unit she didn’t think the hospital was providing enough staffing, so she posted a March 24 plea for donations on her personal Facebook page.

Hours later, administrators accused her of violating patient privacy laws and she was suspended without pay during the investigation. Porter and another nurse who had been suspended for expressing similar concerns were reinstated 10 days later.

The hospital said Porter wasn’t suspended for soliciting donations, but rather for giving out private information.

“The issue with Jhonna Porter arose when co-workers expressed concerns about her Facebook post with specific information, including room numbers of possible COVID patients, to a Facebook group that included former employees,” the statement said.

SEIU dispelled the notion that HCA might not have enough money to provide adequate staffing and enough protective equipment.

“They had so much in profits last year that they took $2 billion to buy back their own stock and pay shareholder dividends,” the union said.