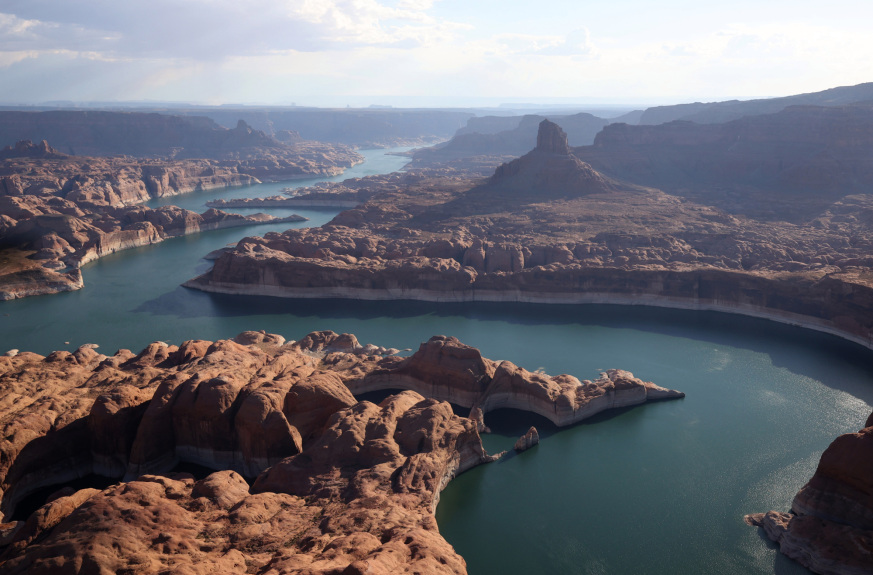 While local reservoirs have enough imported water for Southern Californians to weather the drought into next year, the severity of water shortages throughout the West on Tuesday prompted the Metropolitan Water District of Southern California to declare a “water supply alert.”

The move triggers a call for a voluntary 15% reduction in water use. That reduction could help forestall further water savings moves, including restricting supplies to the 26 local water agencies served by Metropolitan and issuing fines for excessive use.

“Although we can hope for a wetter year next year, we must be ready because it’s going to be dry probably again and its going to be hot again,” said Metropolitan General Manager Adel Hagekhalil at a Tuesday press conference. “The reality is we don’t know how long this will last so we have to prepare. Every drop we save today is a drop we can use tomorrow.”

Metropolitan distributes water from the Colorado River and northern California. The decision to seek the voluntary cutback, approved by its board Tuesday, comes a day after the federal government declared a water shortage in the Colorado River for the first time. The move mandates an 18% reduction of the river water for Arizona and 7% for Nevada — as well as reductions for Mexico — beginning Jan. 1.

Other states, including California, were excluded from the federal mandate, but could be added if the water levels at Lake Mead in Nevada continue to drop. The lake is 35% full, its lowest level since the Hoover Dam was completed in 1936 and the reservoir was filled. Lake Powell, upriver of Lake Mead, is only 32% full, also a record low.

Manmade climate change is considered a key element in drier weather and warming temperatures responsible for the drought. Despite a few years of normal rainfall since 2000, scientists have said the Southwest is experiencing a 20-year megadrought that’s the worst in the region since at least the late 1500s.

Gov. Gavin Newsom has declared a drought emergency for 50 of the California’s 58 counties. Southern California has been spared that declaration so far, although the state’s call for voluntary reductions applies to all counties. Tuesday’s announcement by Metropolitan underscores that call and is likely to increase local promotions of the need to reduce use.

Metropolitan heavily promoted conservation during the 2007-2009 drought, leading to long-term water savings thanks to initiatives that included drought-proof landscaping and low-flow toilets and showers. Additionally, the district has been aggressively building reservoir and aquifer storage, increasing capacity roughly 13-fold since the 1990s.

“Southern Californians have always stepped up to help us through droughts,” Hagekhalil said. “It is because of you that we’re in a good position today in spite of extreme conditions. Now we’re asking you to help again, to look for ways you can conserve more.”

Among immediate suggestions were skipping one or two days of lawn watering per week, taking shorter showers and fixing leaky faucets. Hagekhalil also noted that rebates for low-water use washing machines, toilets and sprinkler nozzles were available at bewaterwise.com, as well as rebates for turf replacement.

While the current drought began in 2020, the district didn’t begin tapping its reserves until this year. On Jan. 1, it had a record 3.2 million acre feet in storage and expects to tap about 600,000 acre feet of that to help fulfill an anticipated 2021 demand for imported water of 1.75 million acre feet. An acre foot is enough for about nine people a year.

Metropolitan serves 19 million people in six counties. Its member water agencies vary widely in the need for imported water, ranging from those almost entirely dependent on imports to those with local rivers, groundwater basins and reclamation projects that fill the majority of water demand.