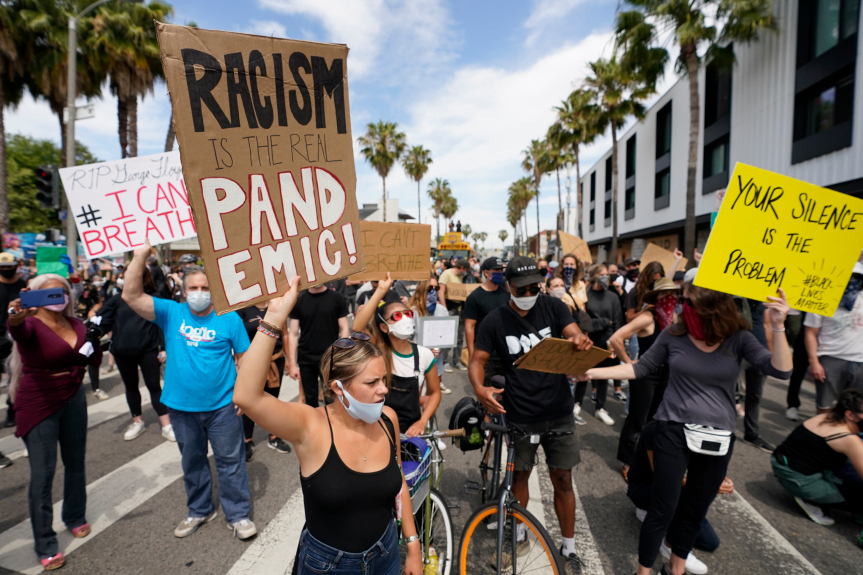 With chants of “George Floyd, George Floyd!” marchers held signs and wore face masks as they marched past boarded-up businesses in Abbott Kinney, Venice’s popular shopping district, on Tuesday, May 2.

Several hundred people — many on bikes and skateboards — joined the march, which  spilled onto the street, with demands to end police abuse and racism.

We’ve come to a stop at Venice and Abbott Kinney where many are taking a knee in the intersection pic.twitter.com/BOzjtgYxNK

The march appeared to be peaceful, with no major incidents reported by 11 a.m. Some businesses appeared to be boarded up with plywood in anticipation of violence.

The march was the first to roll out on Tuesday, but more were expected.

Outrage continued to echo more than a week after white former Minneapolis police officer Derek Chauvin arrested Floyd, who is black, pressing his knee to his neck and not letting him up until he died. The incident was captured on cellphone video, which went viral. Chauvin was arrested and charged with third-degree murder and manslaughter

Still approaching the protest, but seeing more and more business owners out, many boarding up their stores and restaurants. pic.twitter.com/tBD67DGaza

Other protests on Tuesday were being staged across the city, from Downtown L.A. to Hollywood to the San Fernando Valley.

They come a day after President Donald Trump’s threat to deploy military force if the nation’s governors did not stamp out violent protests over police brutality that have roiled the nation over the past week.

The nation braced for another round of violence at a time when the country is already buckling because of the coronavirus outbreak and the Depression-level unemployment it has spurred. LAPD officers trailed the march on foot and on bike.

But organizers in Venice on Tuesday strived for something more peaceful.

“Please understand that we can have a peaceful protest … ” said Kamil Carrington. “All we have is those helicopters and like three cop cars that were laeding and guiding us to a better place.

“Honestly, it’s all about keeping the peace. And I’m so glad that this protest showed that we can have a peaceful protest.”

“This is a great crowd. This is what Venice is all about,” said LAPD Capt. Brian Morrison, who said there was no violence.

This whole thing is pulling at the heart strings. This is the way these things should be done. So, I’m very proud of this community today.

Local business owners, worried about looting, boarded up their storefronts, anxious about what the day and night could bring.

In areas like Van Nuys, business owners and volunteers were cleaning up early Tuesday after a tumultuous Monday during which looting raged into the night.