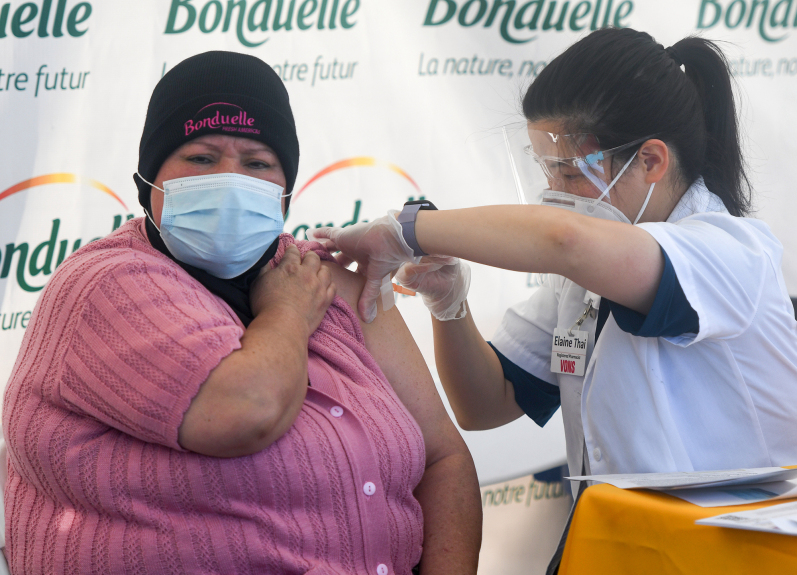 As another million people in Los Angeles County on Thursday, April 1, were able to get in line for often scarce coronavirus vaccine appointments, public health officials urged residents to be patient and avoid gathering and follow pandemic safety rules as they wait to be inoculated.

Residents age 50 and older are now eligible for the shots, but at least 631,000 residents in that age group have already received at least one vaccine dose, officials have said, by qualifying in another eligible category. That leaves 1.4 million people able to hunt down appointments as of Thursday, April 1.

While the county saw an increase this week in doses received, according to the department of public health, the lack of supply remains its biggest obstacle, as nearly 300,000 potential appointments this week weren’t met by availability of the shots.

“Highly contagious variants are spreading throughout the country, and we continue to have concerns about the increased risk of transmission during spring break, holiday travel and parties,” said public health director Barbara Ferrer.

People from different places gathering in large numbers in airports as well as social gatherings when they reach their destinations, she added, present the perfect opportunity for the virus to find new hosts and spread.

“During this critical time in our recovery journey, we have to avoid taking part in activities that are risky and must continue to protect each other by following the safety measures,” Ferrer said.

Officials noted this week that residents need to keep masking, distancing and avoiding unnecessary activities for a few more months while inoculations get ramped up to break free from the pandemic.

Eligibility expands to residents 16 and older on April 15, and an estimated 1 million of the 5 million residents in that age group have already gotten at least their first dose. This leaves almost 3.9 million residents to qualify for the vaccine in just a couple of weeks.

Only the Pfizer vaccine is currently authorized for people as young as 16, officials said, so it is critical that those 16 and 17 years old make sure to select a location where that product is offered when making an appointment.

In four months, the county expects to have vaccinated 80% of the population older than 15. So far, more than 4 million doses total have been administered — including 1.3 million second doses.

Targeting one of the county’s tiny unincorporated cities with a low 21%)vaccination rate, FEMA, the state’s office of emergency services, LA County Supervisor Janice Hahn’s office, and the ABC Unified School District began day one Thursday of a four-day pop-up vaccine clinic at New Hope Community Church in Hawaiian Gardens. An estimated 2,000 people in the 14,000-person community will get Johnson & Johnson shots.

The city of Los Angeles is taking over the mass vaccination site at Cal State LA on April 12, as the project, initially ran by Federal Emergency Management Agency and Governor’s Office of Emergency Services, had plans to shut it down April 11. Doses, then, will be distributed through the state and by April 11, about 300,000 people will have been vaccinated through the initiative.

Those allocations, however, are still far short of the more than 5 million doses per week the state is capable of administering.

Though the situation is getting better locally, there is still a national threat of another surge. While COVID-19 numbers have decreased in L.A. County, officials said Thursday, transmission is widespread and increasing in many other states and countries.

Nonetheless, L.A. County will move into the orange, second-least restrictive tier Monday, April 5, which means more capacity at retail stores, movie theaters, restaurants and other attractions, along with an array of other adjustments, including the reopening — outdoors only — of bars that don’t serve food. Long Beach, which has its own health department, already made the move Thursday, April 1.

There are 534 people with COVID-19 currently hospitalized, down 18 people from yesterday’s total, with 25% intensive care.