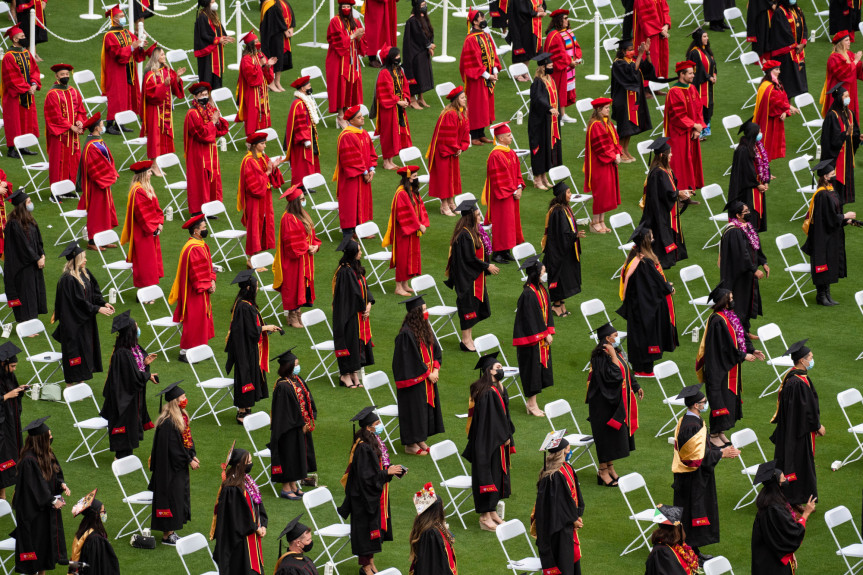 The COVID-19 pandemic put a hold on sporting events, family vacations and commencement ceremonies – a postponement that left many students in the depths of despair.

But with vaccination numbers on the rise and herd immunity on the horizon, graduation ceremonies, hybridized here and there, are returning in full force.

USC began a string of more than a dozen ceremonies on Friday, May 14, at the Los Angeles Memorial Coliseum. The university will hold a morning and afternoon graduation every day for the next seven days.

Around 1,500 undergraduate, graduate and doctoral candidates received degrees from the 141-year-old institution at the first commencement. In addition to including students who received different types of degrees, commencements feature students from 2021 graduating class as well as the class of 2020, which did not receive an in-person ceremony last year.

USC’s week of ceremonies puts it ahead of the curve when it comes to in-person commencement. Loyola Marymount University will hold an in-person event for the 2020 and 2021 classes on July 31 and UCLA will host multiple ceremonies for its 2021 graduates between Thursday, June 10, and Tuesday, June 15, according to the schools’ respective websites.

While generally considered a special event in a typical year, some students said they definitely understood the significance of this year’s commencement. Radhika Agrawal, a 2021 graduate receiving her degree in computer engineering and computer science, said she’s thankful to have a commencement at all.

“I had a lot of friends in the class of 2020 who weren’t able to have that in-person aspect to their graduation,” Agrawal said. “So for me it means a lot, and I know the value of it.”

Agrawal also mentioned that, since every student can invite two guests to attend, her parents were eager to attend the ceremony — so they can watch as all the work they’ve put in to see her graduate pays off.

The day shared many similarities to commencement’s in years past, but signs of the pandemic still permeated the event. USC moved the graduation to the Coliseum for the first time since 1950 in order to meet the social distancing requirements necessary to pull off the event.

Social distancing at the 2021 graduation wasn’t the only first for USC. The university also anointed Tianna Shaw-Wakeman as class of 2021 valedictorian – a special moment as Shaw-Wakeman became the first Black valedictorian in the school’s history. Shaw-Wakeman said her achievement showed how far the United States has come, and yet how far it still has to go.

“None of us chose to live in a world consumed by racial injustice, but we all do,” Shaw-Wakeman said. “Now, though, we can choose how we navigate in it.”

Many of the speakers spoke at length about how the graduating classes of 2020 and 2021 have faced obstacles along the road to degree conferral. Commencement speaker Bina Venkataraman, the editorial page editor at the Boston Globe and former senior advisor of climate change innovation in President Barack Obama’s White House, said told graduates that  these challenges would prove beneficial for the classes in years to come.

Despite all the unusual trappings, the commencement ended as all typical commencements do. Students walked up to receive a degree cover (the diplomas that will eventually fill them arrive later by mail).

Graduates ascended the steps of the Coliseum bleachers and walked out of the stadium, eyes set on new heights.