US recovery from pandemic recession is showing momentum 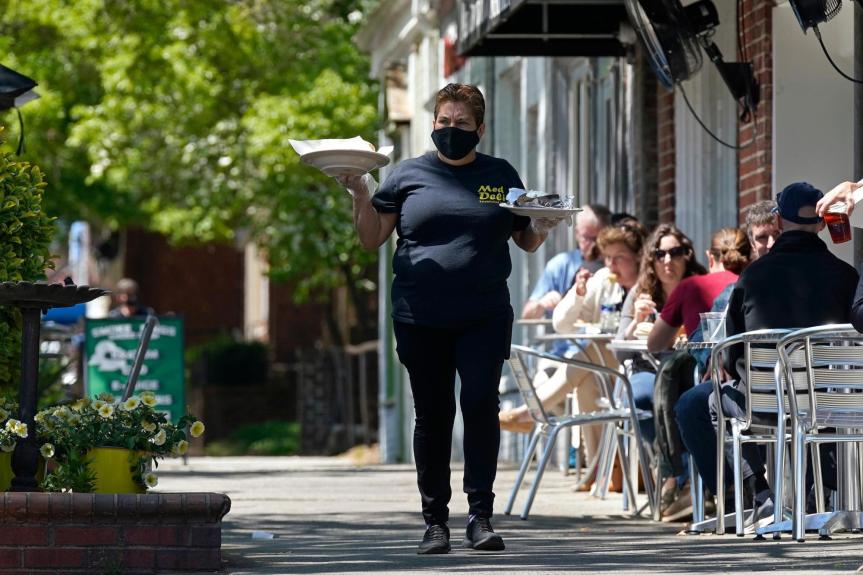 Powered by consumers and fueled by government aid, the U.S. economy is achieving a remarkably fast recovery from the recession that ripped through the nation last year on the heels of the coronavirus and cost tens of millions of Americans their jobs and businesses.

The economy grew last quarter at a vigorous 6.4% annual rate, the government said Thursday, and expectations are that the current quarter will be even better. The number of people seeking unemployment aid — a rough reflection of layoffs — last week reached its lowest point since the pandemic struck. And the National Association of Realtors said Thursday that more Americans signed contracts to buy homes in March, reflecting a strong housing market as summer approaches.

Economists say that widespread vaccinations and declining viral cases, the reopening of more businesses, a huge infusion of federal aid and healthy job gains should help sustain steady growth. For 2021 as a whole, they expect the economy to expand around 7%, which would mark the fastest calendar-year growth since 1984.

In March, U.S. employers added 916,000 jobs — the biggest burst of hiring since August. Meantime, retail spending has surged, manufacturing output is up and consumer confidence has reached its highest point since the pandemic began.

“We are seeing all the engines of the economy rev up,” said Gregory Daco, chief economist at Oxford Economics. “We have an improving health environment, fiscal stimulus remains abundant and we are starting to see rebounding employment.”

The speed of the rebounding economy has been particularly striking given the scope of damage the pandemic inflicted on it beginning in March of last year. With businesses all but shut down, the economy contracted at a record annual pace of 31% in the April-June quarter of last year before rebounding sharply in the subsequent months.

The renewed strength in the United States — the largest economy — is helping lead the developed world out of recession. In Europe, for instance, a recovery has lagged because of smaller government aid and slower vaccination rollouts that have prolonged lockdowns. Economists at Berenberg Bank estimate that the 19 countries that use the euro currency actually contracted in the first quarter.

For all the U.S. economy’s gains, it still has a long way to go. More than 8 million jobs remain lost to the pandemic. And the recovery remains sharply uneven: Most college-educated and white collar employees have been able to work from home over the past year. Many have even built up savings and expanded their wealth from rising home values and a record-setting stock market, which has rocketed more than 80% from March of last year.

By contrast, job cuts have fallen heavily on low-wage workers, racial minorities and people without college educations. In addition, many women, especially working mothers, have had to leave the workforce to care for children.

In its report Thursday, the government said the nation’s gross domestic product — its total output of goods and services — accelerated in the January-March quarter from a 4.3% annual gain in the last quarter of 2020.

Some economists say growth in the current April-June period could reach a 10% annual pace or more, driven by a surge in people traveling, shopping, dining out and otherwise resuming their spending habits.

A major reason for the brightening expectations is the record-level federal spending that is poised to flow into the economy. A $1.9 trillion package that President Joe Biden got through Congress in March provided, among other rescue aid, $1,400 stimulus payments to most adults. On top of that, Biden is proposing two additional huge spending plans: a $2.3 trillion infrastructure package and a $1.8 trillion investment in children, families and education that the president promoted Wednesday night in his first address to a joint session of Congress.

The Federal Reserve’s ultra-low interest-rate policy, designed to encourage borrowing and spending, has provided significant support, too. In fact, the economy is expected to expand so fast that some economists have raised concerns that it could ignite inflation. In part, this is because rising demand has caused supply bottlenecks and shortages of some components, notably semiconductors, which are critical to the auto, technology and medical device industries, among others.

At a news conference Wednesday, though, Chair Jerome Powell reiterated his confidence that any jump in inflation would prove temporary. And he said the Fed wants to see a substantial and sustained recovery before it would consider withdrawing its economic support. In the meantime, Powell made clear, the central bank isn’t even close to beginning a pullback in its ultra-low rate policies.

As more business restrictions are lifted and more people venture out to shop and eat out, companies that serve them are benefiting. McDonald’s, for example, posted a sharp jump in revenue last quarter — even surpassing the same period in 2019, long before the pandemic flattened the economy. Likewise, most major tech companies have reported impressive earnings. At Apple, for instance, demand for the iPhone and other company products drove profits to more than double in the January-March period.

In New York City, Mayor Bill de Blasio said he expects to expects the city to “fully reopen” by July 1. “We are ready for stores to open, for businesses to open, offices, theaters, full strength,” he said.

Thursday’s GDP report showed that consumer spending, which accounts for more than two-thirds of the economy, surged at a 10.7% annual rate in the January-March quarter, a significant acceleration after spending had slowed to a 2.3% annual gain in the final three months of 2020. As consumers spend more freely, employers are likely to keep hiring to keep up with customer demand. Daco said he thinks job growth in some months this year will surpass the nearly 1 million that were added in March.

As American consumers have stepped up their spending in recent months, they have consumed physical goods far more than they have services, like haircuts, airline tickets and restaurant meals: Spending on goods accelerated at an annual pace of nearly 24% last quarter; services spending rose at a rate below 5%. That disparity will likely shift as more restaurants and entertainment venues reopen and people increasingly travel and congregate. On Friday, for example, Disneyland will reopen, with limited capacity, to California residents.

Andrew Song, whose family owns Kwan’s Deli across from Atlanta’s Centennial Olympic Park, is finally feeling hopeful after having lost most of his business last year as office workers stayed home. The deli should be able to sustain itself, Song said, from a rise in hotel guests, convention goers and tourists, even if office workers don’t all return. Recently, he called a laid-off employee back to work.

Song credited the rebound, at least in part, to the rise in vaccinations, which he thinks has made Americans more comfortable about venturing out.

“More tourists are coming,” he said. “We’re seeing some familiar faces back inside the restaurant.”

Consumers weren’t alone in driving last month’s growth. Business investment rose at a strong rate of nearly 10%, reflecting a burst of spending on equipment. And government spending grew at a 6.3% annual rate after two straight declines that had reflected weakness at the state and local level as the recession shrank tax revenue.

Businesses did slow their pace of inventory restocking, which shaved 2.6 percentage points from the quarter’s growth. And a rising trade deficit diminished growth by 0.8 percentage point.

But Mark Zandi, chief economist at Moody’s Analytics, suggested that even that weakness masked evidence of strength: With the U.S. recovery ahead of much of the rest of the world’s, Americans are spending more than consumers overseas are.

“The GDP number was robust and signals that the economy is off and running,” Zandi said. “Consumers are out buying aggressively.”