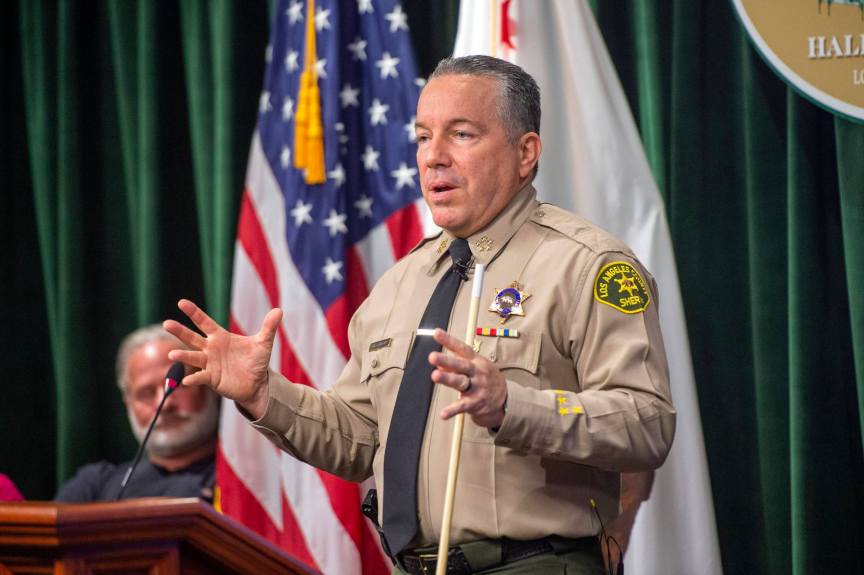 A coalition of leaders including Los Angeles County Supervisor Sheila Kuehl and the county’s lead outreach agency, the Los Angeles Homeless Services Authority, issued a statement Monday urging Sheriff Alex Villanueva to stay out of Venice and describing his efforts to address homelessness in the seaside community as “political theater.”

The joint statement comes as Venice becomes the latest battleground for addressing complaints about the presence of homeless encampments in neighborhoods throughout the county.

The coalition is calling for Villanueva to “permit seasoned and knowledgeable agencies to lead efforts to link people experiencing homelessness to services and housing without the disruptive impact of law enforcement,” according to Kuehl’s office.

“By inserting himself into the Venice Boardwalk re-housing efforts, the sheriff is engaging in political theater in a community where LAPD has primary jurisdiction,” the statement said.

During a press conference last week, Villanueva argued that his principal goal is to connect people experiencing homelessness to services, but arrests could be made if folks do not clear out by July 4.

Villanueva has criticized city and county and officials’ responses to the homelessness issue and has said his department’s mission is to “preserve peace,” propelled by California Government Code 26600. The sheriff said that the Los Angeles Police Department was “handcuffed” by city officials who opposed using enforcement to prevent people from sleeping on the beach and nearby sidewalks.

According to the statement Monday, Villanueva was not invited by LAPD officials to deploy in Venice. But LAPD Chief Michel Moore, who answers to Mayor Eric Garcetti and the L.A. City Council, has not urged Villanueva to back off, saying in a briefing last week that he wished to stay out of the fray.

More than a dozen elected officials, agencies and organizations — including several Venice-based service providers — signed onto a statement saying they were “deeply concerned by Sheriff Villanueva’s assertion that he will ask people living on the boardwalk to move, and if they refuse, arrest them.”

“Pushing people from one community to another doesn’t solve homelessness,” the statement said. “It turns homelessness into a shell game.”

Arrests would be “destructive and pointless,” and lead to people being taken to the downtown jail and then released, while others who “elude arrest will disappear into the surrounding Venice neighborhoods, disrupting months-long efforts by outreach workers to establish relationships and maintain contact with people experiencing homelessness so they can be re-housed,” the statement read.

Villanueva last week applauded his team’s efforts in Venice, saying they had provided shelter to 15 people.

According to longtime advocates in Venice, Sheriff’s deputies had transported several homeless individuals over the past two weeks to the city of Bell, about 20 miles away, to stay in a shelter run by the Salvation Army, although some had been waiting to get housing or shelter closer to the Venice area.

Longtime service providers and others who are critical of Villanueva’s plan say that deeper, systemic problems that include not having enough affordable and permanent housing options have prevented faster action.

The statement blasting Villanueva’s efforts in Venice comes on the first day of a six-week-long effort spearheaded by Councilman Mike Bonin that also aims to empty the boardwalk of encampments. Bonin vowed that his plan would not be driven by threats of enforcement and arrest.

The councilman’s plan includes the involvement of LAHSA and the lead service provider contracted by the agency for that region, St. Joseph Center.

Meanwhile, a spokesman for LAHSA has said that the Sheriff’s department did not reach out to them prior to deploying deputies with the stated aim of offering services and shelter in Venice, and has not reached out to them in the days since.

The joint statement is the first time LAHSA, the county’s top agency tasked with providing services and housing to the homeless, has come out openly against Villanueva’s and the Sheriff’s department’s efforts in Venice. To this point, the agency had stayed out of the conversation.

The agency has been under pressure internally and by advocates and others to take a more forceful stances against initiatives that could lead to law enforcement-driven approaches to address homelessness, including a petition by a former outreach worker urging LAHSA to end partnerships with the Sheriff’s and the LAPD.

Under Bonin’s plan, 200 of Venice’s homeless residents would receive housing vouchers which can be used to subsidize permanent housing. The process of finding the housing units could take several months.

In the meantime, people who they hope to coax away from the boardwalk over the next six weeks would stay in motel rooms as they work with providers to secure longer-range housing.