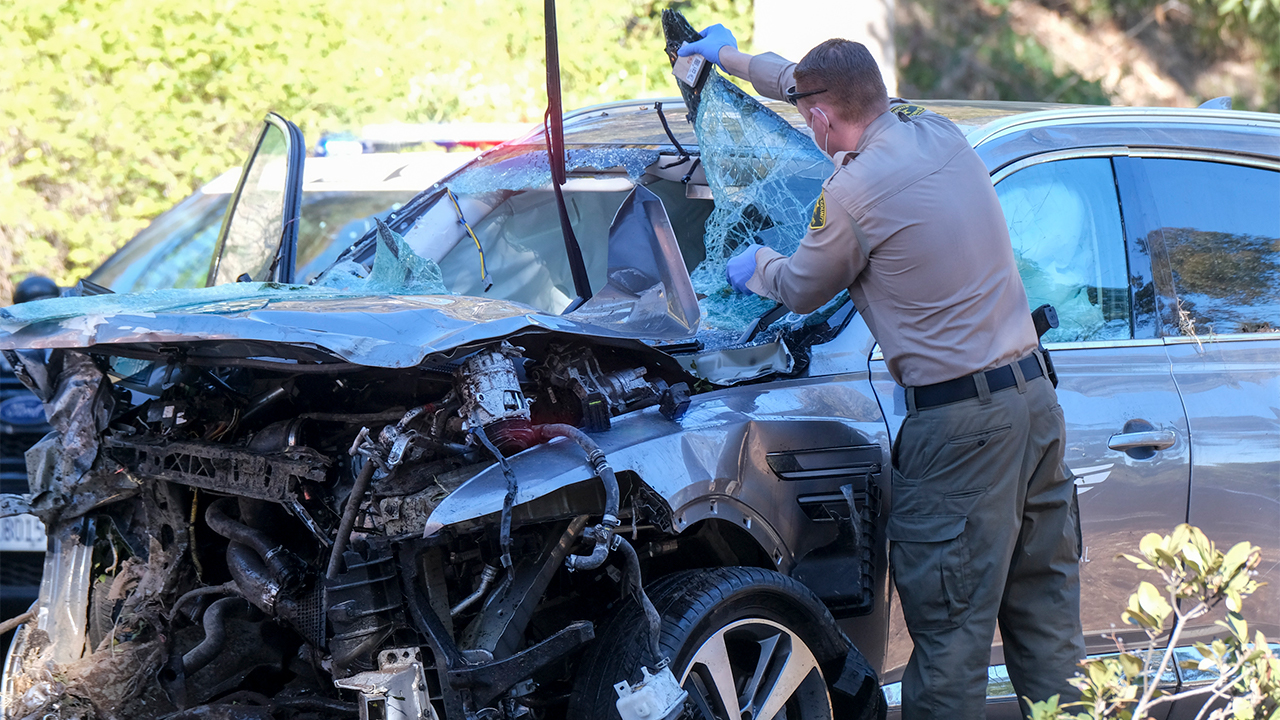 Golf legend Tiger Woods was rushed into surgery with serious injuries to both legs on Tuesday, Feb. 23 after his SUV slammed into a sign, veered off the road and rolled over several times on the border of Rolling Hills Estates and Rancho Palos Verdes, authorities and his agent said.

The crash happened just before 7:15 a.m. along Hawthorne Boulevard and Blackhorse Road, a downhill stretch known for bad accidents, according to the Los Angeles County Sheriff’s officials.

The pro golfer was traveling northbound on Hawthorne Boulevard. It was unclear what caused the crash, but later, at a news conference, Sheriff Alex Villanueva said that seeing how far the SUV traveled off the road, “I would say they were going at a relatively greater speed than normal.”

There was no evidence that Woods was impaired, he said.

Woods, who had to be helped out of the vehicle by firefighters after they ripped off the windshield with an ax, was the only person in the vehicle. He was taken to Harbor-UCLA Medical Center.

Sources told ESPN that Woods suffered crush injuries of both lower legs, including a compound fracture and a shattered ankle.

According to Golf Digest, Woods was in Los Angeles for a two-day content shoot with Golf Digest and GOLFTV at Rolling Hills Country Club. The shoot involved Woods giving on-course lessons to celebrities, providing instruction and hitting a few putts.

She said the call time was 8 a.m. and “he’s always early,” so producers were worried and wondering where he was and trying to call his phone, but he wasn’t answering.

Woods’ SUV, a courtesy vehicle, first made contact with the center median on the windy stretch of road and took out a sign reading, “Welcome to Rolling Hills Estates,”  Villanueva said. The SUV then went across southbound lanes and struck a tree before rolling over several times and coming to rest on the other side of the roadway.

The SUV wound up in a brushy swath off of the west side of Hawthorne Boulevard, between the road and homes. Aerial images showed the SUV on its side with a Genesis Invitational logo on the passenger door.

Villanueva said the interior of the vehicle was “more or less intact,” but the front end was destroyed.

Deputy Carlos Gonzalez was first on scene after a neighbor called to report the crash, Villanueva said.

Gonzalez said Woods was “calm and lucid” and was wearing his seat belt in the driver’s seat when Gonzalez arrived. The airbags had deployed.

“I asked him what his name was and he said his name was Tiger and I immediately recognized him,” Gonzalez said, adding that he tried to talk with Woods to keep him calm until firefighters arrived.

Gonzalez said Woods was not able to stand under his own power, and had to be placed onto a backboard once he was removed from the SUV.

He said because of advancements in technology on modern vehicles, it was “very fortunate that Mr. Woods was able to come out of this alive.” Los Angeles County Fire Chief Daryl Osby said Woods suffered “serious injuries to both legs.”

Many neighbors described the sloping, curvy stretch of road as notorious for accidents, especially among those not from the area.

Gonzalez agreed, calling the stretch “one of our problem spots,” because drivers sometimes will travel in excess of 80 miles-per-hour despite the 45 mile-per-hour speed limit.

“I was just in my kitchen when I heard this loud noise,” said Irene Foster, a resident along Shady Vista Road. “I thought it was like neighbors landscaping or something.”

“It’s crazy and horrible,” Foster continued, “but that’s what happens along these windy roads. People drive fast and don’t know what’s ahead.”

It had yet to be officially determined if speed was a factor in the crash. Traffic investigators remained on scene into the afternoon.

Bob Gragg lives across the street from the crash site, and said he’d heard “a big boom.”

“But it was kind of muffled,” he said. “And I never thought anything of it until we came over here and saw the wreck later on in the day. I’m a golfer, and I wish him my best. It’s going to be a hard, hard road.  He just had that back surgery.”

More than a dozen news crews gathered by on the sidewalk in front of Harbor-UCLA by 1 p.m., awaiting word of Woods’ surgery and condition. There was no information as of 6 p.m.

Woods had just hosted the four-day golf tournament at Riviera Country Club in Pacific Palisades; on Sunday, he handed the trophy to the tournament’s winner, Max Homa.

He said in an interview during the final round of the Genesis Invitational that he hoped to be healthy enough to play in the Masters in April after coming off of his fifth back operation.

Woods, 45, turned professional in 1996 and has 82 PGA Tour wins in his career, including 15 major championships. But back problems and other injuries have slowed his career. He is a native of Cypress and once had a condo in Corona del Mar.

In 2009, he was involved in another high-profile crash where he struck a fire hydrant and a tree while backing out of his Florida home.