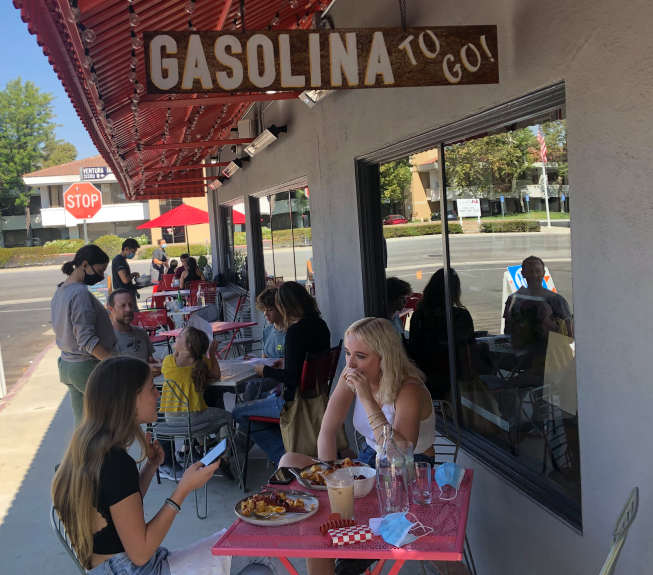 Now that our pandemic is under enough control, for the moment at least, that we can return to the pleasures of outdoor eating, Ventura Boulevard has resumed its place as what may be the world’s longest outdoor café street, with tables hugging the sidewalks for miles, though often with long interruptions between them.

It’s kind of like the tightly packed restaurant streets of Manhattan Beach, but in this case spread out over many miles of San Fernando Valley real estate. Which is what makes Gasolina Café such an unexpected experience — for it sits more or less by itself on Ventura, a short distance from De Soto Avenue.

But then, with its breakfast and lunch menu of Spanish dishes, Gasolina Café is far from the cooking around it in Woodland Hills, closer to the sort of small, casual, laidback eatery you might expect to find on a side street in Barcelona, just off The Ramblas, within a short stroll from the amazing market called La Boqueria. In the West Valley, it comes as a surprise. A very pleasant surprise, thank you. But a surprise nonetheless.

The last time I was in Barcelona, I ate every breakfast at a counter in the popular La Boqueria market, where I’d often see fabled chef Ferran Adrià tucking into a plate of garbanzo beans with chorizo. Far as I could tell, no one ever noticed him — even though he’s the most famous chef in Spain, and one of the most famous in the world. He was just a guy, having his breakfast. And he would have felt right at home at Gasolina, eating the omelette made with chorizo Bilbao, garlic confit and baby kale, served with toast.

This is clearly not an American breakfast. And yet, the food is easily recognizable, a reminder of the universality of good cuisine.

Gasolina is a small restaurant, just a storefront with some seats outside on the street. Despite the café’s Spanish style, it’s become a much-loved neighborhood destination; on a recent Sunday morning, all the outdoor tables were taken up by families, including lots of kids, who were having a fine time eating the churros con chocolate, and the Spanish French toast called turrón. Think dessert for breakfast — kiddie heaven.

It’s a pity Gasolina isn’t open for dinner. I think the classic tortilla Española would make for a fine late meal. But then, I’ve always been a big advocate of eating breakfast for dinner. (I’m fond of dessert with breakfast as well. I mean, why not?) The tortilla Española has long been a point of culinary confusion for American travelers, for it’s not a tortilla in the Mexican sense. It comes closer to the Italian classic, the frittata — a combination of omelette and pancake, with wonderful texture and taste. The egg is mixed with sliced potato, onions and piquillo peppers. There’s a salad served on the side, because, well, there’s a salad served on the side. As a breakfast side, it’s very refreshing.

The bread here is exceptional — worth every bite, no matter that you’ve sworn off carbs till you get your bikini body back. There’s pan con tomate, crispy toasted bread spread with a tomato paste; and pan con aguacate — avocado — a dish we’ve come to know well. The bread also arrives topped with manchego cheese and 18-month-old jamón serrano (Spain’s glorious sheep’s milk cheese) — the sort of dish eaten standing up at the counter at Madrid’s chain of fast-food eateries called Museo de Jamón — yup, “Museum of Ham.”

If you’ve ever suffered through the sorrow of an egg McMuffin at Mickey D’s, wash away the memory with Gasolina’s breakfast sandwich of Spanish ham and cheese, with a scrambled egg, inside a superb brioche bun; trust me, you’ll never go back to the old ways.

The patatas bravas are a wonder, easily one of the best dishes at Gasolina — crispy home fries with chorizo, jamón and an egg served sunnyside up (just like I like it). The yolk spills all over the spuds when you cut into it. Expect to lick the plate clean. There’s a scramble of shrimp, garlic and asparagus too, in case you need more veggies.

And lest I give the impression that Gasolina is all breakfast, all the time, lunch dishes run to sandwiches of goat cheese and chorizo, manchego and tomato, portobello mushrooms and avocado. There’s a garbanzo bean and baby kale salad. (Local zoning restrictions apparently insist there be kale on every menu!)

For those who need more, there’s a beef burger with aioli, Mahón cheese and onion marmalade. And some of the best cappuccino in town, good barista stuff, without the fuss and bother. Café con leche too. Maybe someday, there’ll be paella — but not here. A paella pan would take up the whole kitchen.