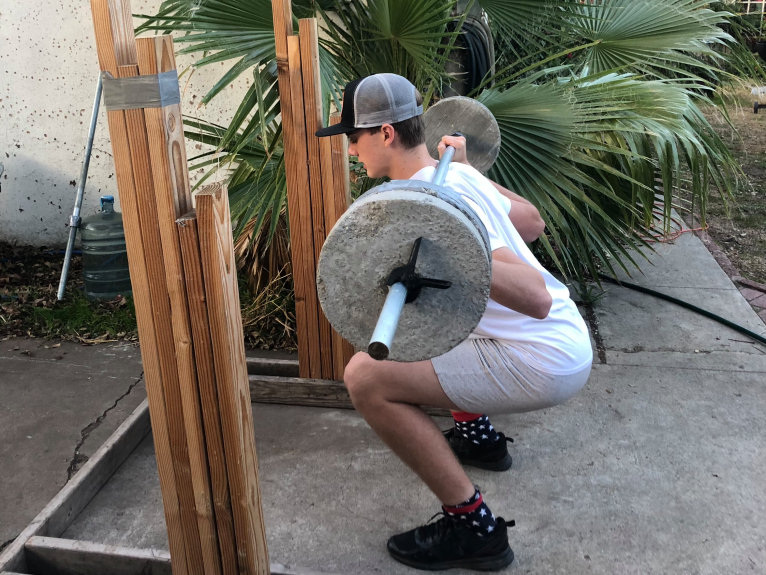 “My dad says I was always building stuff and trying to figure things out when I was little, I don’t remember, though,” Bristow said laughing. “I have a huge Lego collection. I’ve always been a builder.”

That explains why Bristow, a 16-year old football player at Taft High, decided to build a weight rack during the early days of the COVID-19 pandemic, which has kept him and thousands of other high school athletes away from the field, as well as a traditional weight room.

“I’m just controlling what I can,” Bristow said. “I built everything for about $100.”

Bristow is an engineering student at Taft with a 4.1 grade-point average, which is why he made it look easy, too.

“I built it on April 17 and started using it the next day,” he said. “I broke a weight the first day, but it was a learning lesson.”

All it took was a quick trip to Home Depot for some 2×4 wood, screws and bits for a power drill, and 150 pounds of cement. Bristow cut off the top three inches of Home Depot paint buckets to help create the mold for his weights.

He placed a small piece of PVC pipe in the middle of the mold for a makeshift barbell, which is made of three-quarter electric metallic tube conduit. The 11-inch diameter of the bucket, at three inches thick, makes for an almost perfect 20-pound weight.

“I can squat and bench press with it,” Bristow said.

Last year, Bristow played junior varsity football. This year was meant to be his first season on varsity as a wide receiver and tight end for first-year coach Aron Gideon. From April to now, Bristow has gained 20 pounds and is now 6-foot-1, 170 pounds.

The Los Angeles Unified School District (LAUSD) allowed athletic conditioning to begin on campus on Nov. 9. LAUSD Supt. Austin Beutner came to Taft to watch football conditioning on Nov. 10, and it marked the district’s first on-campus athletic activity since March. Bristow was there, too. However, the approved workouts didn’t last long – not even a month.

The school district suspended athletic conditioning again on Dec. 7 due to the county’s rise is COVID-19 cases.

It will soon be one year since the Los Angeles City Section – the governing body for LAUSD athletic competition – has had a sanctioned event or had a membered school run a full practice. Even after the California Department of Public Health (CDPH) permitted cross country dual meets to begin Jan. 25, there’s still no sign of resuming athletic competition anytime soon.

Still, Bristow is a shining example of how he can continue to better himself.

“It makes me feel like I’m in the weight room,” said Bristow of the weight-lifting rack he built. “It keeps me optimistic.”

There’s no telling when the City Section will have sports. When Beutner visited Taft on Nov. 10, he was asked if students in the classroom is a prerequisite for athletic competition. This was his answer:

“The way you get in the front door at school, or to competition, is the overall level of COVID has to be down in the community,” said Beutner. “… I do not see a scenario where students are not in school but allowed to compete. It’s not because we favor one or the other, but because it’s all about safety.”