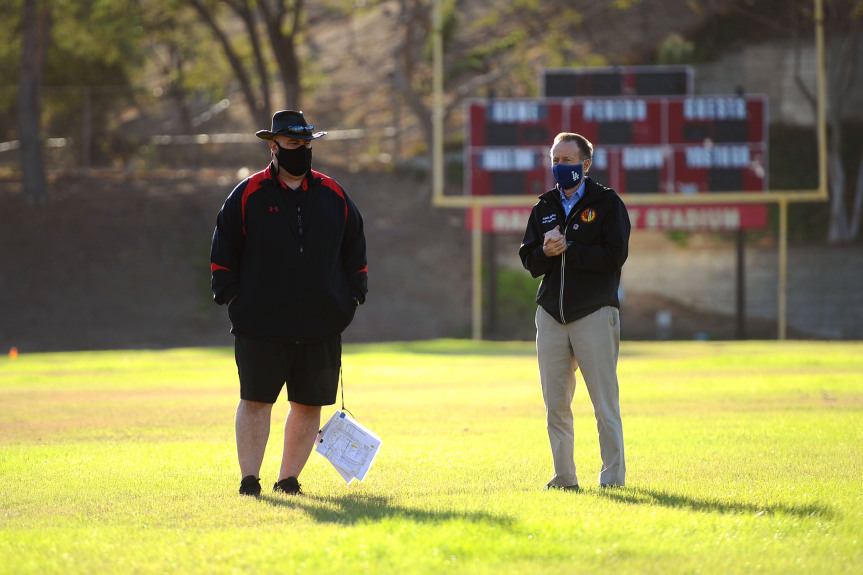 Just one high school in the district was ready to go Monday, Nov. 9: Taft High.

The school’s new football head coach, Aron Gideon, whose leadership has shined during unprecedented times, had nearly half a dozen players report for the first day of conditioning. The players had to meet requirements for being allowed back on campus, including a negative test for COVID-19 within the last three days. They also needed to have received a physical exam and completed paperwork.

It marked the first athletic activity on an LAUSD campus since March.

“It feels awesome to be out here,” Gideon said. “It’s like Christmas.”

Beutner was on Taft’s campus Monday to observe the practice. He spoke with Gideon on the field before calling the players together, although they stayed several feet apart, for a talk. Beutner, for a brief moment, looked like a coach addressing his players. He asked them about testing, how it felt to be outside and offered some words of encouragement before taking questions from the media.

Because of the coronavirus pandemic, the CIF calendar was adjusted for this year, and athletic competition is now scheduled to begin in December. The first football games are set for Jan. 8, but some coaches and administrators believe that start date is in jeopardy with the number of COVID-19 cases recently rising in Los Angeles County.

Beutner made it clear that students being back in the classroom to some degree will be a prerequisite for athletic competition.

“The way you get in the front door at school, or to competition, is the overall level of COVID has to be down in the community,” said Beutner. “When the COVID numbers are at a safer level it will open up the virtual front door to a school, allowing for athletic competition and classroom participation – the two go hand in hand.”

Beutner proceeded to say, “I do not see a scenario where students are not in school but allowed to compete. It’s not because we favor one or the other, but because it’s all about safety.”

Testing is available on school campuses, but players who opted to be tested at an urgent care or other facility over the weekend were able to receive their negative test result before Monday’s practice, according to Gideon.

“I expect many more players to be practicing with us by the end of the week,” said Gideon.

Other local City Section schools plan to begin conditioning as soon as possible. Chatsworth is aiming to have athletes on campus by Friday, Nov. 13 and Cleveland is expected to start on Monday, Nov. 16.