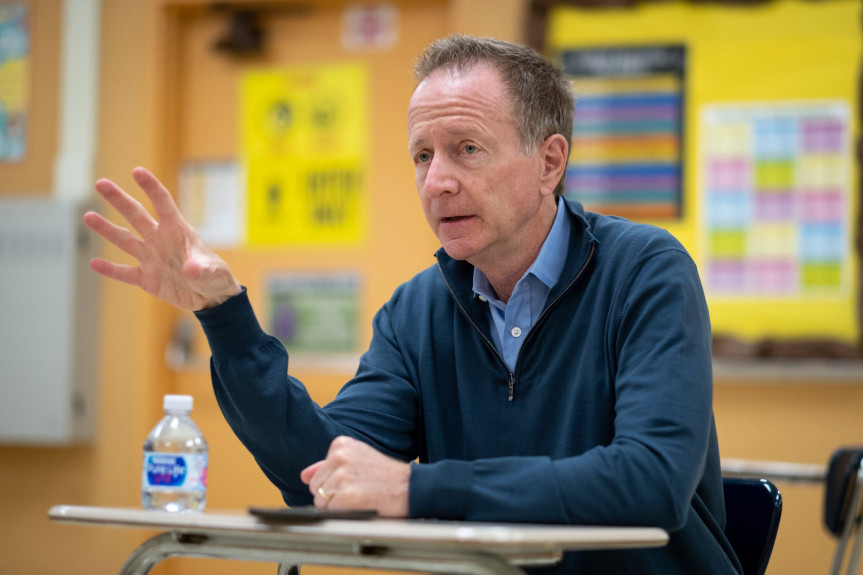 In the waning days of his tenure leading the nation’s second-largest public school system, Los Angeles Unified Superintendent Austin Beutner delivered his final weekly online address on Monday, June 28, offering a few pieces of advice to the district and his eventual successor.

“It’s been a privilege,” Beutner said of his three years serving as superintendent, seeing LAUSD through challenges such as the pandemic and a teachers’ union strike. Beutner will step down when his contract expires on Wednesday.

Starting Thursday, he will be replaced by Interim Superintendent Megan K. Reilly, a top financial officer in the district for more than a decade, while a search continues for a replacement.

For whomever his successor will be, as well as the roughly 25,000 teachers, 50,000 other staff and about 600,000 students and their families served by the district, Beutner said, “As an honorary member of the class of 2021, I want to share just a few words of advice which I recently shared with my colleagues.”

Beutner, 61, said future district leaders need to first and foremost “keep schools and the students they serve as the center of the work.” He said the district has successfully transformed from a top-down, one-size-fits-all bureaucracy to a more nimble organization led by local teams, and he hopes it will stay that way.

“We were able to change the organization because we changed our perspective,” he said. “The view from Beaudry (the district’s headquarters) should never obstruct the view from the front of the classroom. This change in how to approach solving problems has led to big improvements in instruction that are benefiting students.”

His second piece of advice was for the district to “remember the magic happens in the classroom, starting with early literacy.” As an example of that, he pointed to the district’s Primary Promise program to help young students struggling to read because their kindergarten year was disrupted by the pandemic.

“We have seen how well the Primary Promise effort is working, in particular for Black and Latino students. The next step will be using this approach to provide help in both literacy and math to more young students,” he said.

He also highlighted the need for the district to continue to leverage schools as community resources for students and families, especially in higher-need areas.

“People don’t want to hear excuses or be given a navigation guide to the Byzantine network of government agencies, they just want help,” he said. “And we know the best place to help children is at their local, neighborhood school.”

For students to have the best chance at success, he also noted that the entire community of Los Angeles needs to step up and support public education.

“Los Angeles is a global city, the heart of the fifth-largest economy in the world,” Beutner said. “Everyone in the Los Angeles area needs to help make sure every child gets a great public education. Find a way to get involved, get engaged, roll up your sleeves, do the work.”

He concluded by emphasizing that Los Angeles Unified is well on the path to recovery from the pandemic.

“The future of our community is in our public schools,” he said. “And I’m pleased to say that the future looks bright. Thank you for your continued patience and your support. It’s been an honor to serve as your superintendent these past three years.”

Beutner’s decision not to extend beyond his three-year contract with LAUSD was announced in April by the LAUSD Board of Education.

In a letter he wrote to the board at that time, he said, “As the son of a public-school teacher and the product of a great public education, it has been an honor to serve as superintendent of Los Angeles Unified for the past three years. It is the most rewarding job I’ve held during my nearly 40-year career.”

Before becoming superintendent, Beutner’s career included stints as first deputy mayor of Los Angeles and about a year as publisher and CEO of the Los Angeles Times. He also was a mayoral candidate. He started his career as an investment banker.