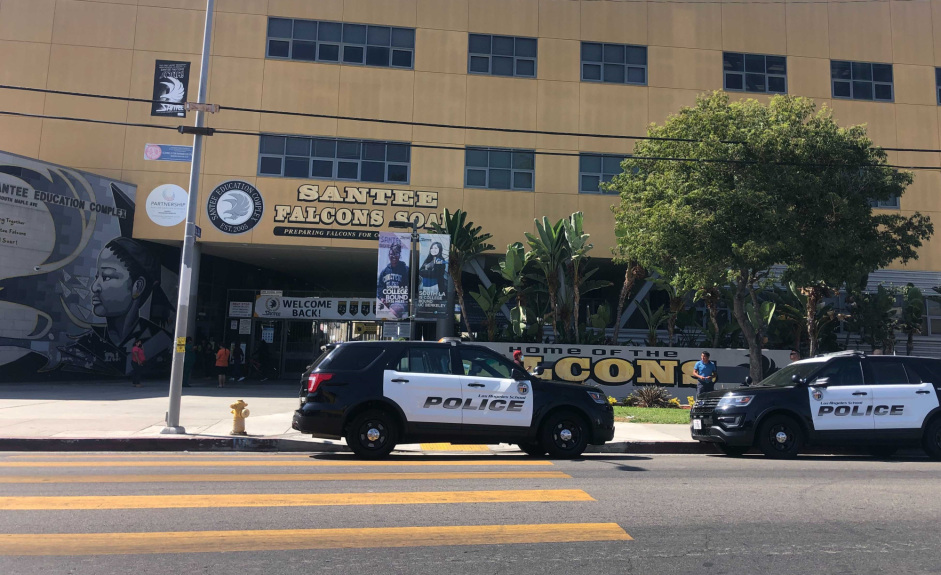 A 17-year-old student at Santee High School was shot in the leg Thursday afternoon, Sept. 2, as classes at the south Los Angeles campus were letting out, authorities said, leaving the boy with non-life-threatening injuries.

The shooting stemmed from a feud between two students that started on Friday when one student attempted to rob a gold chain off of another student, said Officer Gil Gamez, president of the Los Angeles School Police Association.

The animosity carrying over into Thursday when the victim of the attempted robbery beat up the student who had tried to steal from him, Gamez said.

Later, when school let out, Gamez said, the student who had attempted the robbery pulled out a gun and shot the other student on the street just off of campus.

“It was dismissal time and there were kids walking home from school,” Gamez said.

“Fortunately, the student was shot in the leg and his injury is not life threating,” said a statement from the Los Angles Police Management Association. “A school police officer was close enough to apply a tourniquet and provide immediate medical attention.”

School administrators believe both students have gang ties, Gamez said. Authorities are looking into that possibility.

It was unclear if the suspect had been arrested.

Breaking News: #LASPD is responding to an additional gun shot victim down on the perimeter of Maple Primary Center located at Maple Ave and 36th Street down the street of Santee HS. Please stay clear of the area.

When the gunfire erupted, some students had been walking and biking home. Others were waiting for parents or their friends to finish up at school. Student athletes were packed inside the gym for a meeting.

Then a school administrator, from Frida Kahlo High School, a continuation school whose campus is attached to Santee, ran outside her office yelling at the students to get back inside.

Both campuses locked down.

“A lot of us felt different emotions — some of us wanted to leave because we were hungry, some of us were scared, trying to stay in and be safe,” said one Santee senior. “But emotions were all over the place.”

A senior at Frida Kahlo recounted how she could have been real close to the shooting.

“And it’s crazy, ‘cause me and him walk that way and we could’ve seen it,” she said, pointing to where the shooting took place. “But we stayed with them,” she said, now pointing to other friends. “So we were good.”

Not long after, a second shooting broke out about 12 blocks away, near the Maple Primary Center, another Los Angeles Unified campus; it appears that shooting was unrelated to that school or to the Santee High shooting, authorities said, with an adult getting grazed and the suspect fleeing.