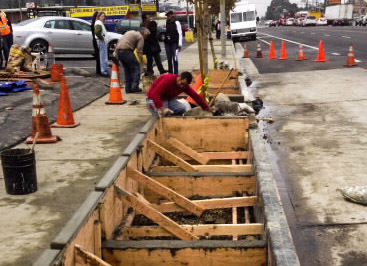 City officials have celebrated the opening of the Glenoaks-Filmore Stormwater Capture Project, which will capture stormwater and urban runoff from a 115-acre watershed.

“The Glenoaks-Filmore Stormwater Capture Project will reduce localized flooding in an area that is disproportionately impacted by environmental concerns,” said Councilwoman Monica Rodriguez. “This $3.24 million project is a sustainable solution to managing stormwater and increasing groundwater recharge in the San Fernando Groundwater Basin while bringing much needed green infrastructure to Pacoima.”

The stormwater capture project is located in Pacoima and is bordered by Filmore Avenue to the south, Glenoaks Boulevard to the west, Paxton Street to the north and Dronfield Avenue to the east. The project will improve the quality of local water and limit the amount of urban runoff with trash, bacteria and other pollutants that goes into the L.A. River, officials said.

“Initiatives like the Glenoaks-Filmore Stormwater Capture Project are part of a bigger puzzle that requires teamwork between Bureaus and Departments, as well as the leadership of Councilmembers like Councilmember Rodriguez, to ensure our long-term water and climate resiliency, ” Board of Public Works President Greg Good said. “Ensuring that there is zero wasted stormwater – and that we’re cleaning it along the way – is crucial to taking advantage of our increasingly limited rainy seasons. This project embodies that.”

According to the Los Angeles Department of Sanitation and Environment, the project will also benefit the area by reducing flooding and increasing groundwater recharge in the San Fernando Groundwater Basin.

“Projects like Glenoaks-Filmore turn a problem like localized flooding into an opportunity for stormwater capture,” said Susana Reyes, vice president of the Board of Water and Power Commissioners.

“This is ingenuity at its best, which we will need to rely upon in order to meet the water challenges ahead of us in the city of Los Angeles,” she added.

The Glenoaks-Filmore Stormwater Capture Project was funded by the Los Angeles Department of Water and Power and the California Coastal Conservancy. It was completed in May 2021 after four months of design and construction.

“LADWP is committed to stepping up our local water supplies and stormwater capture plays an important role in our mission toward an even more sustainable water future for LA,” said Rich Harasick, LADWP senior assistant general manager of the water system. “Being able to partner with LASAN on projects like Glenoaks-Filmore means keeping water right here in LA, that would otherwise have gone to waste.”