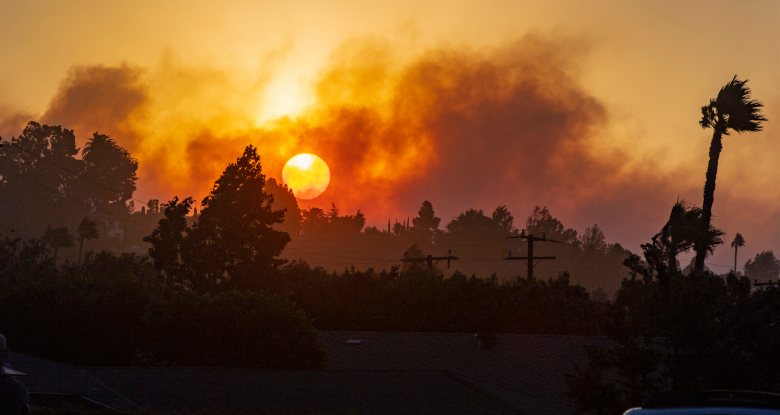 Extremely dry, windy weather that fueled the outbreak of a large Orange County wildfire and put the region on edge watching for other potential blazes is expected to ease by Tuesday afternoon.

Temperatures likely will rise through the week, and dry conditions will remain. But the strong gusts of Santa Ana winds that are a key component to what on Monday was considered the most dangerous fire conditions all year are expected to subside.

As feared by forecasters, minor isolated showers over the weekend that brought a little precipitation to a rain-starved Southern California proved too little, too late, as bone dry vegetation ignited in portions of Orange County, and strong gusts of wind pushed the Silverado fire to more than 4,000 acres.

Other, smaller fires also broke out around the region.

“Basically, we are looking at a particularly dangerous situation,” said David Sweet, a meteorologist with the National Weather Service’s Los Angeles office.

The weather remained unseasonably cool on Monday, but that was no match for the unusual combination of single-digit humidity and damaging wind gusts that reached upwards of 70 miles per hour in parts of Southern Calfornia.

“What we are seeing today is the worst of it,” Dan Gregoria, a meteorologist with the National Weather Service’s San Diego office, said early Monday afternoon. “We are in the peak of it right now.”

The worst of the wind was expected Monday night, with the gusts in most of Southern California expected to ease overnight and largely taper off by Tuesday afternoon.

The single-digit humidity is also expected to moderate, but the region will still face very dry temperatures. For firefighters, a respite from the gusty winds that can rapidly push flames or carry embers to spark new hot spots is expected to aid their efforts to get the fires that erupted Monday under control.

A break from the fierce winds won’t just be a respite for firefighters.

On Monday, utility companies were forced to turn off power to thousands of customers in order to reduce the risk that their equipment might ignited a wildfire. By midday, Southern California Edison, the area’s largest utility, had cut power to almost 22,000 of its 5 million customers, the majority of whom lived in San Bernardino County.

The harsh winds Monday also resulted in residents seeing smoke from the El Dorado fire and raining ash from the Bobcat fire, though the winds did not leadup to flareups of the two blazes, which have been burning for weeks and are currently 95 percent contained.

The temperature is expected to rise by mid-week and heading into the weekend, into the 80s across much of the region. And the light showers that popped up in portions of the region are not expected to return during the current seven-day forecast.