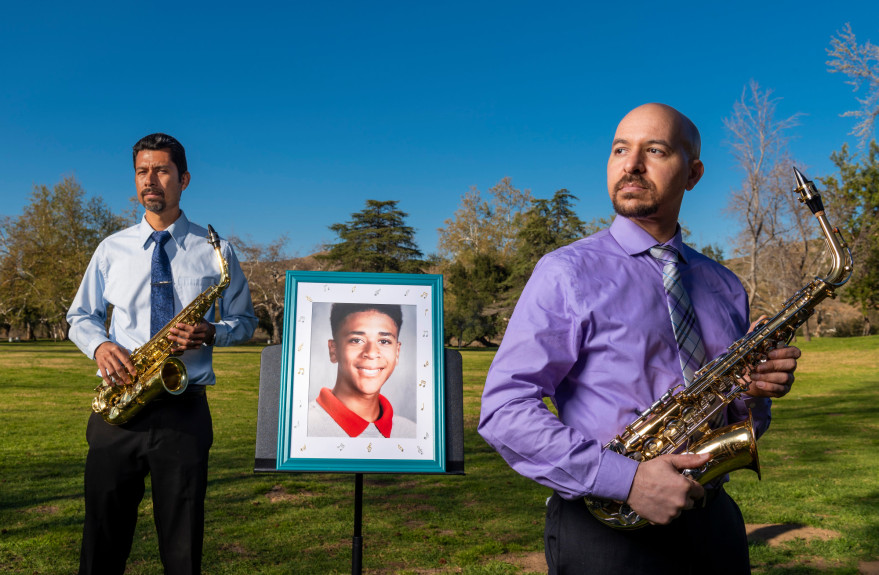 In late December, freshman Rodney Moore Jr. went back-to-school shopping with his family after getting a message that Anaheim High School — closed since March by the coronavirus pandemic — might reopen.

“He got so excited; he even picked out a new backpack at Costco,” his mother Adriana Moore said through tears. “He never got to use it.”

Not long after, the school sent another notice: It wouldn’t reopen for in-person classes at least until March 2021.

“That’s when we began to notice his attitude change,” said Moore, a 49-year-old Anaheim resident. “He was speaking negatively about everything, like nothing was going to get better.”

Weeks later, on Jan. 2, the boy who loved to play saxophone in the marching band, took his own life. He was 14.

Suicides across the nation have climbed in recent years. But in three out of four Los Angeles-area counties, they dropped in 2020 from 2019 figures and from the average for 2016-2019. That’s due to a decline in adult suicides since the pandemic struck. But for minors, although the number of suicides were small, they either didn’t drop in 2020 or were well above the normal range for the previous four years in three of the four counties.

That’s raised concerns among experts. They worry that social isolation and other pandemic stresses in the era of distance learning are hitting young people hard, especially the most vulnerable among them. Although some schools in Los Angeles, Orange, Riverside and San Bernardino counties have begun to reopen, mental health experts warn a tidal wave of mental health problems may be on the horizon. Calls from young people to Southern California mental health hotlines have gone up as school districts and other professionals work to help students before it’s too late.

The kids are not alright

According to the coroners’ offices of Los Angeles, Orange, Riverside and San Bernardino counties, suicides dropped in 2020 from the year before.

It’s the same statewide. According to the California Department of Public Health, suicides have fallen since the start of the pandemic. In each of the four counties, 2020 suicides were below — often well below — four-year averages.

But those drops were almost entirely among adults. Of the four counties, only San Bernardino County saw a slight uptick in adult suicides in 2020. The rest saw drops.

The number of Southern California minors killing themselves each year is in the single or double digits in each county. But, outside of Riverside County, the number of young people 18 and under taking their lives rose in 2020.

Calls to crisis health lines have increased during the pandemic, according to Jonathan Goldfinger, the CEO of Didi Hirsch Mental Health Services, which runs many of the nation’s crisis lines and most in Southern California.

Students are “facing adversity like they’ve never faced in their lives,” he said. “Toxic stress with despair is a lethal combination, making them significantly more likely to attempt suicide. Coupled with schools having limited training and mental health professionals, it’s a setup for enormous, preventable tragedy.”

It’s standard practice to ask callers if they’ve had thoughts of self-harm or suicide. Callers ages 8 through 18 who reached out to the Crisis Line were a little more likely to say they had thought about hurting or killing themselves in 2020, according to Didi Hirsch, going from 44% in 2019 to 46% in 2020.

Young people who were already more likely to consider killing themselves are more vulnerable now, according to Mark Kaplan, a professor of social welfare at UCLA. Among the most vulnerable: LGBT youth, those suffering abuse, homeless youth, those with substance abuse problems, those living in foster homes or those growing up in poverty.

According to Tory Cox, an associate professor of social work at USC, parents should recognize that “these are times when their children need more engagement, not less, more outreach, not less.”

The Moore family knows what social isolation can do, saying that and academic pressure during distance learning changed everything for Rodney.

Adriana Moore and her husband, Rodney Moore Sr., said their “polite, sensitive” son loved animals and the beach, played violin, melodica and saxophone and enjoyed jazz music. He was a straight-A student at Sycamore Junior High in Anaheim, where he was in the advanced class of the school marching band.

But after starting high school online in fall, Rodney’s grades began to plummet.

“When COVID-19 hit, he thought just like every kid, ‘We get to stay home.’ But then as time went by, he would say, ‘I don’t like this. I don’t like being in front of a computer for seven hours,’ and on top of that, doing homework afterwards,” Adriana Moore said. “I remember he would stay up all night, checking his grades a lot. It was really tormenting him.”

Adriana Moore said teachers didn’t clearly communicate with or check in with students, and sometimes talked down to them. Switching between live classes and those in which students work at their own pace, and having to turn in homework, was confusing. She tried to reach out to one teacher, but got no response.

“(Rodney) would tell me sometimes he would ask a question and the teacher would say, ‘You should know that by now,’” Adriana Moore said.

Anaheim Union High School District spokesperson John Bautista said he could not comment on employees’ communications with the Moores, “out of respect for the family’s privacy.” He added that the district has provided resources, workshops and training on suicide prevention for staff and families and offered condolences to the Moore family “and all of our families that have been affected by this pandemic.”

The Moores said their son felt isolated from friends and his sister, who was at college in Arizona. Rodney had been excited to go to high school, join the marching band, get his first job, learn to drive — all things suddenly taken from him in the pandemic.

Months into the monotonous routine of distance learning, Rodney became irritable, frequently retreated to his room, slept all day and skipped Zoom classes, his mother said.

He attended virtual marching band rehearsals and became the saxophone section leader but later refused to practice or play music.

“He would tell me, ‘I don’t see what the point is; nothing’s going to change,’” Adriana Moore said. “That was one of the last things he told me.”

School districts can play a role in students’ mental health.

A 2019 Southern California News Group analysis of anonymous self-reported state survey data showed an average of one in five middle school and high school students in California public school districts said they had thought about killing themselves.

But many districts had lower rates, likely thanks, in part, to their work to improve students’ mental and emotional health.

“Families and caregivers understand their children a lot more, but it’s also really important to connect with school personnel to make sure they get the support necessary,” said Joel Cisneros, school mental health director for the Los Angeles Unified School District.

In April, the district launched a mental health hotline. As of Feb. 15, it had fielded more than 13,000 calls and connected those who needed help to mental health services, according to Cisneros.

Since the pandemic began, the Santa Ana Unified School District’s mental health team has seen a “dramatic” increase in students identified as being at risk of killing themselves, along with other mental and emotional health crises, according to Sonia Rodarte Llamas, assistant superintendent of school performance and culture.

Employees are identifying one to two students a day who need to be connected to mental health experts, Llamas said.

“Isolation and lack of connectedness have exacerbated social-emotional struggles in our students,” Llamas wrote in an email.

But online education has made keeping an eye on students more challenging, according to Vanessa Gomez, coordinator of student support.

“Being in distance learning is definitely a barrier to kids feeling connected and, thank God, knock on wood, we haven’t seen a spike in suicides,” she said. San Jacinto Unified is working to reopen elementary campuses this spring.

In the Rialto Unified School District, the district adjusted its mental health practices for distance learning. Among those changes, according to district spokeswoman Syeda Jafri, are “virtual wellness centers” for middle schools and online counseling for high school students. The district will continue distance learning for the rest of the school year.

“It isn’t just, ‘I’m so depressed today.’ It’s a real thing a lot of us students are going through,” she said. “I think the main thing is being open to having that conversation. That’s where most change starts, with talking.”