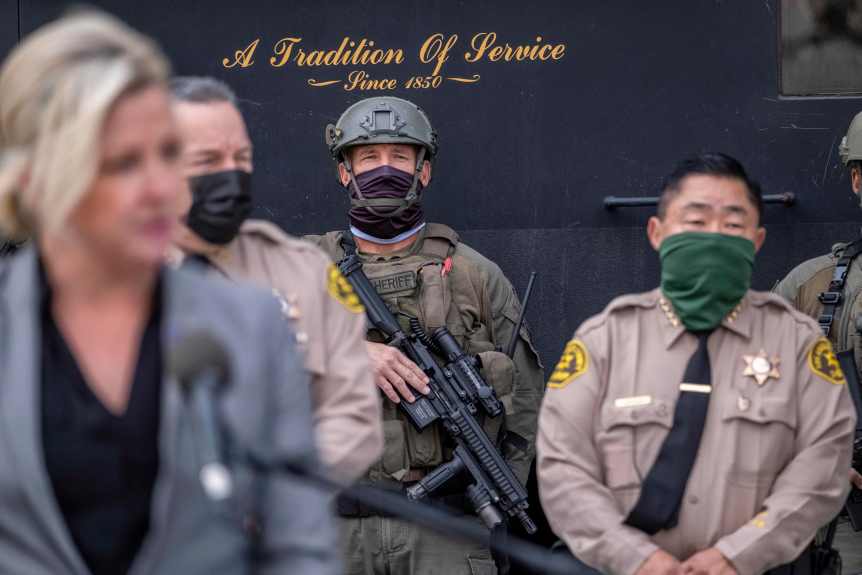 Law enforcement officials across Southern California will be on high alert on Inauguration Day, Wednesday, Jan. 20, looking for any hint of violence after the chaotic attack on the U.S. Capitol building by furious supporters of President Donald Trump two weeks ago.

While it won’t be anywhere near the level of security already in place in Washington, D.C. for President-elect Joe Biden and Vice President-elect Kamala Harris’ swearing in — where thousands of National Guard troops are on patrol, manning checkpoints and protective barriers now surrounding the Capitol — Los Angeles area residents could also see an increase in police activity.

Trains and buses across L.A. County will see more Sheriff’s deputies than usual, and more special Sheriff’s units in tactical gear or in armored vehicles might be out on the roads. San Bernardino County residents, too, could see more deputies out on patrol, with special units deployed around the area. And police in Long Beach will be on tactical alert through Thursday.

All of that is despite there being no specific threat of Inauguration-related violence in the greater Los Angeles region.

“Many of you are wondering if there are credible threats here in Los Angeles County, and the answer is ‘no,’ there is no credible threat,” said Sheriff Alex Villanueva, standing in front of deputies in tactical gear and an armored vehicle outside the Hall of Justice in downtown L.A. on Tuesday. “Regardless of that our mission is to act as if there was one.”

Sheriff’s officials in Orange and Riverside counties did not say whether their deputies would be out in greater numbers on Wednesday. Police in Santa Ana, the county seat and home to multiple government buildings, said after the Jan. 6 attack that they were being more watchful. But officials in both counties said they weren’t aware of any threats of violence.

Thousands of rioters overwhelmed a relatively small number of Capitol police officers, then ransacked the building. During the violence, five people, including a police officer, were killed.

Since then, FBI officials across the country have sought to track down those involved in the attack. FBI agents in L.A. have made four arrests in the last week, including the arrests of three Beverly Hills residents on Tuesday.

Kristi Johnson, the assistant director in charge of the FBI’s L.A. field office, said the agency created a command post last Friday where special agents and intelligence analysts alongside local law enforcement were monitoring for threats.

While officials Tuesday said there were no threats in Southern California, the area did see a small number of acts of violence the same day as the Capitol attack. LAPD was criticized for failing to intervene when a group of flag-waving Trump supporters attacked a black woman outside their headquarters. That attack is being investigated as a hate crime, LAPD officials said.

There also remain questions of how seriously law enforcement officials took the threat of an attack on the Capitol before it happened. Among those in the crowd that took part in the violence that day, the FBI has identified members of white supremacist groups and militias.

Also in attendance were some public officials, including police officers. At least four local law enforcement employees — three LAPD and one L.A. County Sheriff’s employees — have been identified as having attended the rally. None so far have been accused of participating in the subsequent attack.

Both Villanueva and LAPD Chief Michel Moore said Tuesday those employees were interviewing with the FBI.

Due to the ongoing COVID-19 pandemic, Moore said anyone planning to demonstrate or celebrate on Inauguration Day should stay home instead.

The chief said LAPD was aware of three different demonstrations happening Wednesday, including one at City Hall and another at MacArthur Park near downtown. He said police made contact with the organizers of all three. Moore said everyone should stay home, but pledged to protect anyone choosing to protest or celebrate.

Mayor Eric Garcetti, who is a member of Biden’s inaugural committee and has helped plan the event, said anyone thinking of committing violence in L.A. on Wednesday could expect a swift response from law enforcement.

“If you are planning violence here in Los Angeles, you will be stopped,” he said. “You will be prosecuted and you will pay the price.”