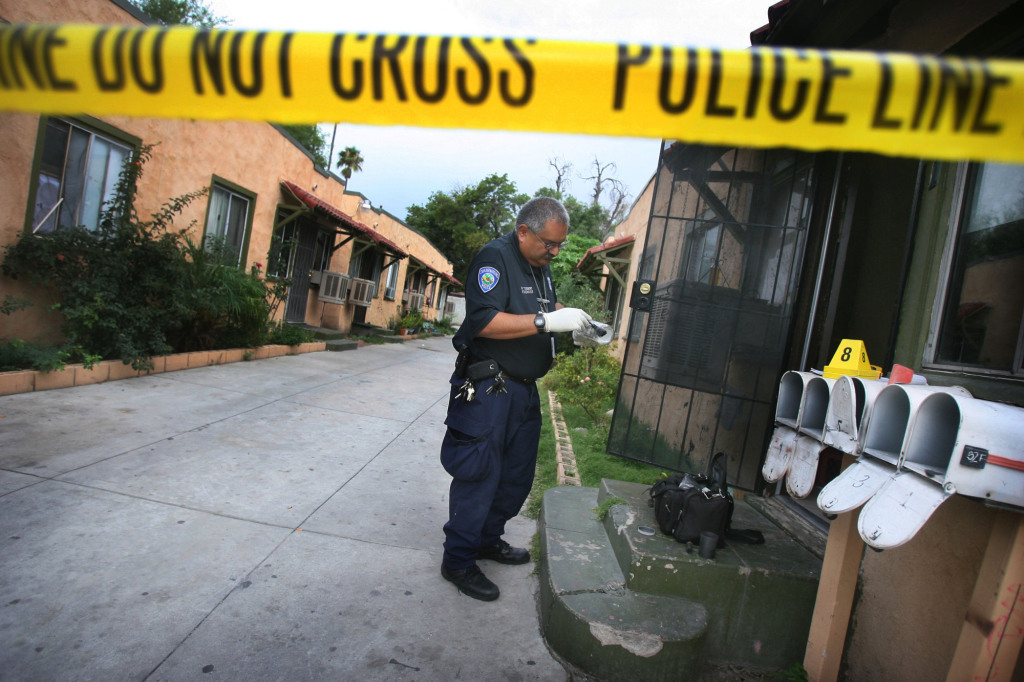 Law enforcement agencies across Southern California were in a state of readiness Monday  as the Minnesota murder trial of a former police officer charged in the death of George Floyd neared an end, raising concerns about a repeat of mass protests and unrest that occurred last summer.

Jurors were handed the case in the trial of Dererk Chauvin on Monday afternoon after lawyers for both sides wrapped up their closing arguments. It is unknown how long it will take the jury to reach a verdict.

In Los Angeles, Sheriff Alex Villanueva and Police Chief Michel Moore have been vocal in urging people to protest peacefully following the verdict.

Villanueva said the sheriff’s department is communicating with state and local law enforcement agencies “as to their state of readiness,” including the California National Guard, which could be sought for assistance if conditions demand.

“I strongly support the First Amendment and the people’s right to protest, but if these actions become violent or shift into lawlessness, then swift and decisive action will be taken to protect life, protect property and maintain civil order,” Villanueva tweeted over the weekend. “This will be accomplished in a fair, firm and impartial manner, in accordance with the law and 21st century policing concepts.”

Villanueva also said deputies will support news media reporters in their efforts to cover protests, “but that support does not extend into allowing members of the media to become part of the problem once an assembly has been declared unlawful.”

Last week, Villanueva, Moore and about two dozen religious and community leaders gathered in front of LAPD headquarters to plead for calm following the verdict in Chauvin’s trial.

In Long Beach, police spokeswoman Allison Gallagher said Monday that the department is proactively reaching out to business leaders and the community and they are starting their planning and preparedness efforts.

In Orange County, the sheriff’s department is actively preparing for demonstrations that might take place, OCSD spokeswoman Carrie Braun said. She said that more than 150 deputies with specialized training in “crowd management” will be ready to deploy anywhere in the county to help maintain order during potential protests.

“We are working with Orange County law enforcement agencies to ensure personnel are available to protect the First Amendment rights of those wishing to have their voice heard peacefully, and to protect life and property,” Braun wrote in an email Monday.

The Riverside Police Department has been on a state of “tactical alert,” as proceedings continue in Minnesota, Officer Ryan Railsback said. That means some officers may be called in to work longer shifts if they are needed to provide security at protests.

“As the largest city in the county, we played host to thousands of people who mostly exercised their First Amendment rights peacefully,” Railsback said. “We want to ensure a safe environment for them, but also have a community to protect.”

Anaheim police have been monitoring social media for any local events related to the trial, but are not making any immediate changes in staffing as it unfolds, APD Sgt. Shane Carringer said.  The department will take a “reactive” approach, and respond to demonstrations as they happen on a case-by-case basis.

Similarly, San Bernardino Police officers “have no specific directive regarding any possible protests connected to the trial,” SBPD Sgt. John Echevarria said. “We will be conducting business as usual. Hopefully nothing gets out of hand.”

Elsewhere, Beverly Hills police will be on “full alert” in the city’s residential and business districts this week as the trial concludes, and will be working with “other law enforcement personnel and private security companies.”

“While we are hopeful for a peaceful time following the verdict, the Beverly Hills Police Department is well-prepared and committed to protecting our city,” Police Chief Dominick Rivetti said in a statement Friday night.

City officials noted that some businesses may choose to limit their operations, and the city could take other “preventative measures” to protect city facilities and property.

Santa Monica interim police Chief Jacqueline Seabrooks said in a video message to the community that the department has already begun ramping up its visible presence around the city. “You’ll see our enhanced presence throughout our community,” she said.

“Because peaceful assembly as expressive conduct is protected by the First Amendment, the Santa Monica Police Department is committed to assisting and facilitating in this peaceful freedom of expression,” she said. She also said the city has prepared and posted online a checklist for business owners, providing tips for how to prepare for possible civil unrest.

“All of us will do all within our power to support and facilitate these expressions within our community,” LAPD’s Moore said of possible protests following the verdict. “As one community, our Los Angeles community, we must also strive to not allow legitimate anger and frustration to spiral into violence, or allow others to hijack community emotions for their own destructive purposes.”