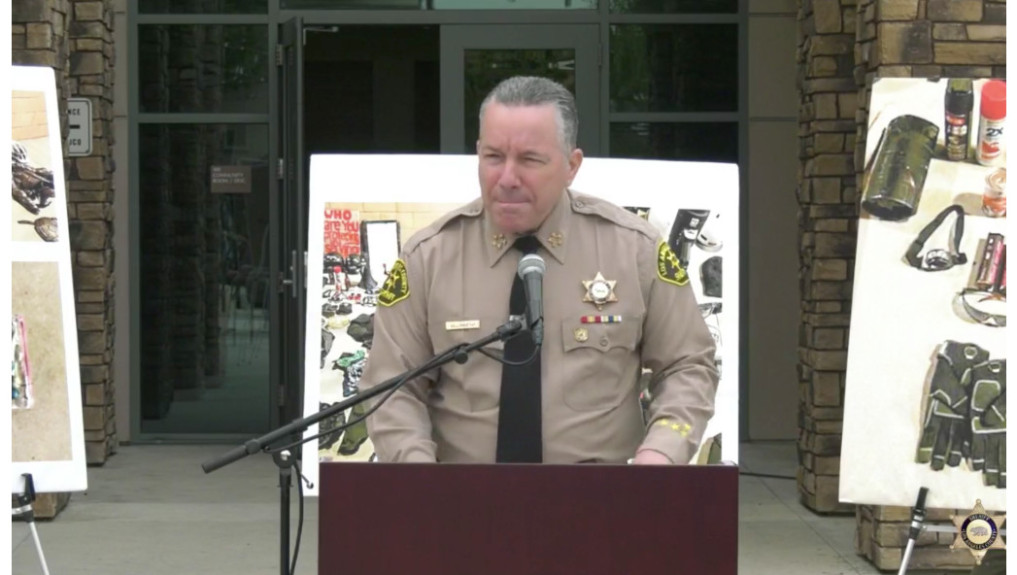 As concern looms over potential outbreaks of violence leading up to the presidential inauguration next week, some local authorities issued messages Wednesday reassuring the public that safeguarding Southern County communities was their top focus.

Villanueva condemned the mob violence that took place at the U.S. Capitol Jan. 6 — when a destructive group of President Donald Trump’s supporters breached the building in an attempt to halt the election certification. He compared his disapproval of that day’s events to “the rioting and looting we saw after the killing of George Floyd.”

He urged residents to exercise their First Amendment rights to speech and protest, but said “it has to be in a manner that does not harm our communities.”

In a similar message Wednesday, Culver City Police Chief Manuel Cid said the agency was “aware of concerns from members of the public about potential armed protests throughout the country” in the days leading up to the inauguration, but said no specific threats or plans for demonstrations have been made.

“The Culver City Police Department understands the severity of the situation and is committed to safeguarding the lives and property of our community members,” Cid said in a statement. “We want to reassure the community that we are prepared should any issues arise, and are collaborating with our local, state and federal partners.”

Beverly Hills Police Chief Dominick Rivetti posted a video message this week saying his agency would be on high alert.

“As inauguration day approaches and with the potential of increased protest activity across the country, the city is working to ensure your safety,” Rivetti said. “The Beverly Hills Police Department remains in regular contact with our federal, state and local law enforcement partners as we share the latest information. While we are hopeful for a peaceful week ahead, the department will be prepared and on full alert in our residential and business districts leading up to and on inauguration day.”

The remarks from authorities come as federal officials warned some law enforcement leaders about the potential for violence and attacks on state and federal buildings during the week leading up to the inauguration.

One police chief told the New York Times that federal officials were “very, very worried about these, what they referred to as domestic violent extremists, embedding themselves in other protests.”

At a Los Angeles Police Commission meeting Tuesday, Chief Michel Moore said no specific threats had been made to the city or elected officials, but that the agency would continue monitoring.

Moore addressed what he called a “grievous moment in our time, and in this great democracy, and in the next few days as we move towards this inauguration,” saying his commitment was “for the safety of Los Angeles, by ensuring that we have added deployment of personnel, that we are ensuring the safety of our city facilities, we are monitoring closely with our state and federal representatives on any information strains, tips or leads relative to protest activity here in the Los Angeles region.”

Other local agencies took to social media to reassure the public.

“Our collective agencies are working closely together and remain vigilant to respond to potential threats that may occur anywhere in the state, including the Capitol,” they said. “Collectively, we maintain strong relationships with our security and intelligence partners at the local, state and federal levels and are continually monitoring and sharing information about possible emerging threats to the state.

“Together, our role is to safeguard lives and property and ensure that California remains a safe place for those who live, work and travel within the state while ensuring the ability of individuals and groups to lawfully exercise their First Amendment rights.”

In Orange County, the Sheriff’s Department said on social media this week “it’ll monitor events nationwide and remain ready should a demonstration occur.”

Trump, who was impeached Wednesday for allegedly inciting last week’s riot at the U.S. Capitol on the day Congress was certifying his defeat in the November election, issued a statement decrying any plans for disruptive activity leading up to the inauguration of Joe Biden.

“In light of reports of more demonstrations, I urge that there must be NO violence, NO lawbreaking and NO vandalism of any kind,” he said. “That is not what I stand for, and it is not what America stands for. I call on ALL Americans to help ease tensions and calm tempers. Thank you.”