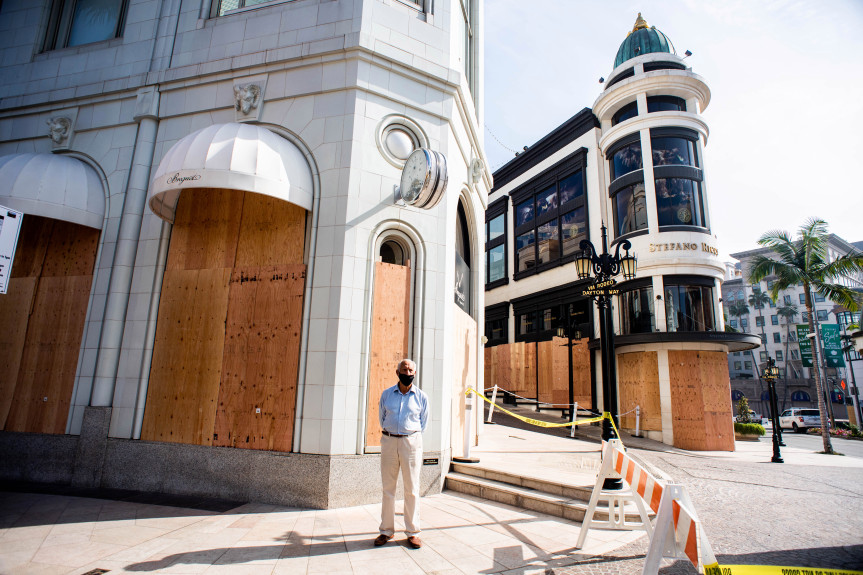 Police across the Southland will be on heightened alert Tuesday as voting wraps up in a highly contentious presidential election that has led to fears of large protests — regardless of the winner — and possible looting or violence.

Business owners have also been making preparations, with some choosing to board up their windows or remove merchandise from shops and store fronts.

That work began more than a week ago in some business districts, most notably in Beverly Hills, where Rodeo Drive will be completely closed to pedestrians and vehicles on Tuesday and Wednesday.

“As Election Day approaches and with the potential of increased demonstration and protect activity across the region, the city is taking a proactive approach to ensure a safe community for residents, businesses and visitors,” Beverly Hills Police Chief Dominick Rivetti said in a message to the community last week. “Beginning on Halloween and through election week, the Beverly Hills Police Department will be on full alert throughout the residential and business districts. Additionally, other law enforcement personnel and private security companies will offer support. Some businesses in the city may choose to limit operations during this time.

“… While we are hopeful for peaceful weeks ahead. your police department is prepared to protect our city,” he said.

Other police agencies put out similar statements or messages of assurance to residents that they will be prepared to respond to any unrest.

“The Santa Monica Police Department has been working with our local and regional partners in preparation for any unrest surrounding the election. Currently, we have no intelligence to indicate Santa Monica will be a place of unrest. However, we also know that things can change rapidly and are actively monitoring the situation,” the department said in a Facebook statement.

“Additionally, the City of Santa Monica and Santa Monica Police Department  have plans in place that include a robust staffing model and have coordinated with the Office of Emergency Management to have an activation plan for the entire city,” the statement said.

“We have prepared an operational plan to ensure the protection and safety of our residents and visitors,” according to a social media post from the Torrance Police Department. “We’ve added additional officers to the field, activated our Emergency Operations Center and will work with all city resources and critical infrastructures within Torrance to ensure community safety. Additionally, a mutual aid plan has been established to assist our law enforcement partners in the event of any civil unrest or other disruption.”

Los Angeles County sheriff’s Capt. Salvador Becerra of the Malibu/Lost Hills Station says he and his staff have coordinated with all law enforcement agencies in a 30-mile radius.

“All our stations are on a modified schedule for maximum readiness,” he said in an online message. “All have activated their Mobile Field Forces. All have activated their Emergency Operation Centers. And all are fishing for intelligence to support their missions. Thus far, no intelligence exist to suggest we will face a civil uprising. Nonetheless, we are prepared for it. We are hoping for the best, but are planning for the worst.”

Los Angeles Mayor Eric Garcetti offered that same assessment last week, saying there is no confirmed indication of any organized attempt to spark violence or unrest on election day.

“We are very prepared for the elections, but at the same time, I don’t want to buy into a narrative that there’s going to be chaos during our elections,” Garcetti said. “We prepare for the worst, but we are hoping and expect generally the best.”

Garcetti said “there’s no intelligence of a widespread plot” to cause election-related disturbances. But he said people going to vote centers should “keep a lookout, let us know if anything’s happening and we’ll be there for you.

“But again, I do not expect that to be anything widespread. There may be individual instances, we’ll see some stuff around the country. But don’t let any of that change the narrative of you, your right to vote — and don’t be scared to vote. We need everybody’s vote protected.”

Lakewood City Manager Thaddeus McCormack said in a community message the city is “not aware of any specific threats to Lakewood or surrounding cities.”

“However, we know that some local businesses, out of an abundance of caution, have boarded up their windows, and you may notice that Lakewood Center has water-filled vehicle barricades in position around the exterior of the mall property in order to move them into place if needed,” he said. “The city of Lakewood and the sheriff’s department are prepared for any contingency and will be on alert, with increased staffing, up to and beyond Election Day, and we are prepared to implement measures to make sure that Lakewood remains safe.”

Still, many business owners aren’t taking any chances, opting to board- up businesses or take other precautions.

John Votava, a spokesman for Kroger — owner of Ralphs and Food4Less stores, said managers at some of the company’s locations in the area were told they may need to take precautionary measures in case there are protests that escalate.

“Out of an abundance of caution, we have taken the necessary steps to prepare select stores and protect our associates in the event of civil unrest surrounding the election,” Votava told City News Service.