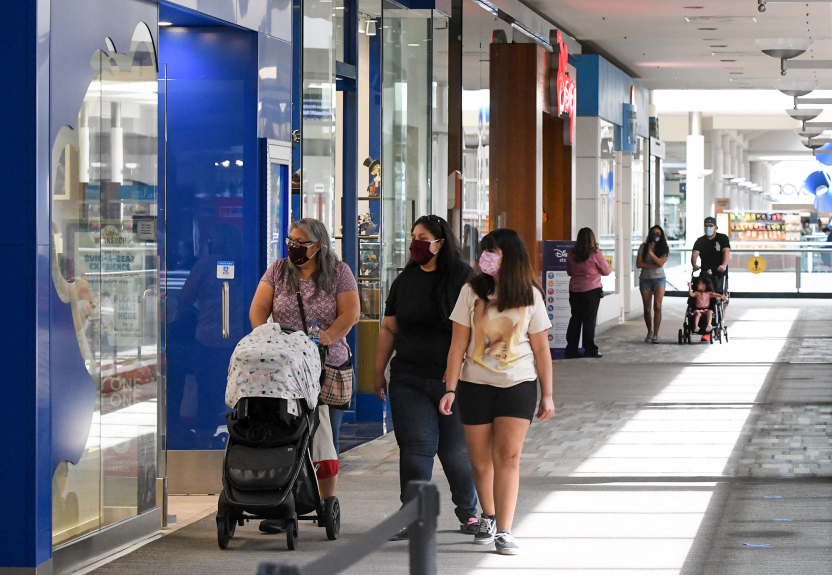 When the doors to Lakewood Center mall, in the greater Long Beach area, swung open Wednesday, Oct. 7, for the first time since June, shopper Sharon Dotson was one of the first to take advantage.

“I’m so glad malls are finally open again,” said Dotson, who was about to hit Macy’s and Bed, Bath & Beyond. “I’ve missed being able to wander around and browse for a couple hours.”

Shopping malls throughout Los Angeles County received the OK to resume indoor operations Wednesday after shuttering for months because of the ongoing coronavirus pandemic. But don’t expect the malls to be packed, even with the holiday season right around the corner: Health rules require malls to be at 25% customer capacity and for any congregation areas, such as food courts, to remain closed. Food could still be purchased to go in some places, but many vendors had not yet reopened.

The opening of malls Wednesday was just the latest in a spree of recent industry restarts countywide. Nail salons got the OK to open indoors — also at 25% capacity — last week and cardrooms officially opened outdoors Monday, Oct. 5. Outdoor playgrounds also opened this week. And, as of Tuesday, breweries and wineries can open outdoors as long as they provide food services.

The Lakewood Center opened on Wednesday, like other malls managed by Macerich Real Estate Co., with new sanitizing and cleaning protocols. The focus is on frequent touch points, including the use of electrostatic disinfectant sprayers and hospital-grade filters in its HVAC system, according to Lakewood Senior Marketing Director Annette Norwood.

“We’re so happy to be able to reopen again,” Norwood said. “Especially with the holiday season expected to begin early this year. It’s the perfect time for us to gear up.”

Macerich, based in Santa Monica, manages dozens of shopping centers across the country, including the Stonewall Center in Downey and Los Cerritos Center. The Lakewood mall opened with 75% of retailers operating Wednesday, Norwood said.

“Despite everything,” Norwood said, “we have faired really well.”

The first day of reopening saw many eager customers return, though crowd sizes overall remained small across the county. A spattering of shoppers showed up to malls in Redondo Beach, Torrance, Montebello, Sherman Oaks and Arcadia.

“Seems like they’re taking the right precautions to reopen,” said Lakewood Center shopper Aaron Robago. “It does feel weird to see the mall so empty, though.”

Nearly half of the stores at the South Bay Galleria, in Redondo Beach, were expected to open this week, said John Alderson, executive vice president of U.S. Real Estate, which represents the mall as a client. More stores are expected to reopen as the rollout continues, he added.

“We’re right at the forefront of a holiday season,” Alderson said of the good timing. “We’ve been very careful with our safety protocols, with sanitizing and hand-washing stations.”

Protocols also included monitoring the number of shoppers at all of the entrances and a mall team that will make sure people are wearing masks. Those customers who don’t have masks can take one provided by the mall, he said.

At Westfield Fashion Square, in Sherman Oaks, the scene was relatively quiet as Amy Woodall started up business at cosmetics store L’Occitane. But Woodall said she was hopeful. In a sense, that’s all she could be after being closed for months.

“You can’t let this tear you down,” she said, as she stood next to her displays and a sign noting a capacity limited to four guests at a time.

Woodall also lamented the hit to the business but said she was happy just to get going again.

“It makes me feel really good about being part of society again,” she said.

Customers — though relatively sparse early Wednesday afternoon — were happy to be walking around the mall.

“I’m so glad they opened,“ said Ernie Benitez. “I’m not really at the mall buying things. I just like talking with other people and seeing them.”

While the Sherman Oaks mall was getting back to business, gone were some longtime tenants — their storefronts conspicuously absent. GNC, Daniel’s Jewelers and JoS. A. Bank Clothiers: all gone.

South Bay Galleria, meanwhile, saw only a handful of patrons on each of its three floors.

Ryan Traylor, an Inglewood resident shopping there Wednesday, said he had been driving to Orange County malls while he waited for LA County’s to reopen.

“I came to check out the scene,” Traylor said, “and see what changed in the last few months.”

This reopening has been somewhat easier than the first go around, according to Alderson, with the Galleria.

Malls initially closed on March 19, around the start of the pandemic, and remained that way for less than two months. The Galleria, Alderson said, didn’t learn about a June 9 reopening until the day before.

The reopening was short-lived, however: Gov. Gavin Newsom orders malls to close once more on July 1.

This time around, Alderson said, there was “time to start communicating.

“The stores are so excited,” he added. “For many folks, this is their livelihood.”

Shoe stores appeared to drive the traffic Wednesday at the Westfield Santa Anita mall in Arcadia, with guests lining up outside the various stores that had reached capacity. With the mall’s usually busy food court and movie theaters still closed, shoe stores were one of the few places that had much of a crowd.

“I’m so happy about it (the mall reopening)” because sitting at home all the time was driving him crazy, Kurniwan said. “It was refreshing to shop in person.”

The first day back, meanwhile, was reasonably successful for the Shops at Montebello, where the indoor stores weren’t crowded — but there were plenty of people walking around at midday.

When the mall opened, there were lines of 50 or more at several shoe stores, according to Marina Satoafaiga, the mall’s marketing manager.

“We know shoppers are anxious to get out there and make a purchase in person,” Satoafaiga said. “In today’s world, although there’s Amazon and online, there’s still high demand for brick and mortar.”

Jake Salazar of Azusa was one of the first shoppers who came for new shoes, some Nike Air Jordan sneakers.

“It’s pretty cool,” Salazar said about the opening. “I hope everyone is following the guidelines, staying 6 feet apart.”

His friend, Josh Macias, said the employees were doing a good job of enforcing the social-distancing and mask-wearing rules.

“I haven’t gone to a mall in many months,” Macias said. “I do miss it to some extent. It does feel a little bit off.